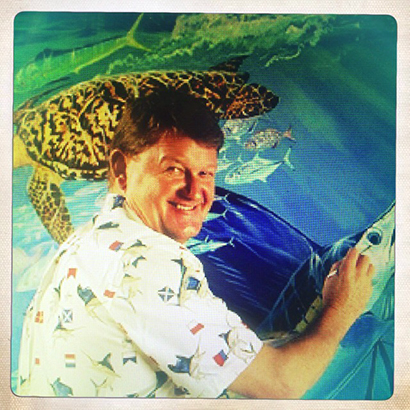 Though not Jamaican born (his first moments came in Germany where his father was serving in the British Army), Guy Harvey is truly Jamaican bred. A fascination of the sea is perhaps an inevitability when growing up in the Caribbean, and Harvey’s interest became rooted deep within his soul. He came to Scotland to gain a degree in Marine Biology and picked up a PhD in a similar field back in the West Indies. Then, in 1985, the art world began to take serious notice of him.

Harvey exhibited a pen and ink depiction of The Old Man and the Sea (see Things we Like) in Jamaica, and such was the interest that he became a full-time artist.

Today, Harvey is regarded by many as the leading marine wildlife artist in the world. His work has filled books, led to television work and adorns t-shorts, posters, key-rings and hats. Harvey has never lost his love for conservation though, and has used his influence to create and fund a variety of ventures, including an artificial reef named in his honour.