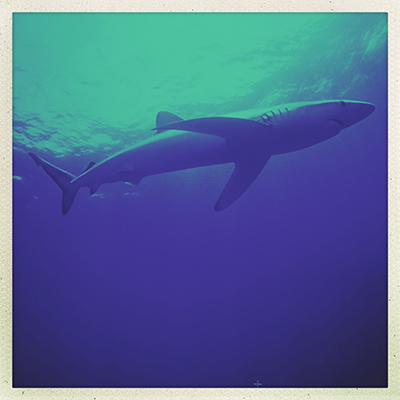 While Fishpool recently discovered that some sharks are utterly Pathetic, one species for which such an adjective could not be less accurate, is the blue.

The blue shark (Prionace glauca) is a fish of temperate and tropical waters, occurring in all but the coldest seas. It is a slender bodied shark, with large pectorals and tail, designed to accelerate at searing pace. The eye is large and the underslung mouth relatively small, but such features are overshadowed by the incredible colour of the fish’s back – it is a blue as deep as the sea itself.

Blue sharks are much sought after by anglers. They do not grow as large as fish such as the great white but an adult female (the larger sex) can grow up to around 12 feet in length and weigh in excess of 300lb. Plenty big enough.

The British record is, fortunately, something no longer coveted. The attitude towards shark fishing (and other species too) has changed significantly in recent years, and catch and release is uniformly observed. Fish in excess of the record (which Fishpool has no intention of looking up in this instance) have been caught and measured or weighed at sea, but no longer will the dead bodies of sharks be hung on the quay for trophy shots to be taken.