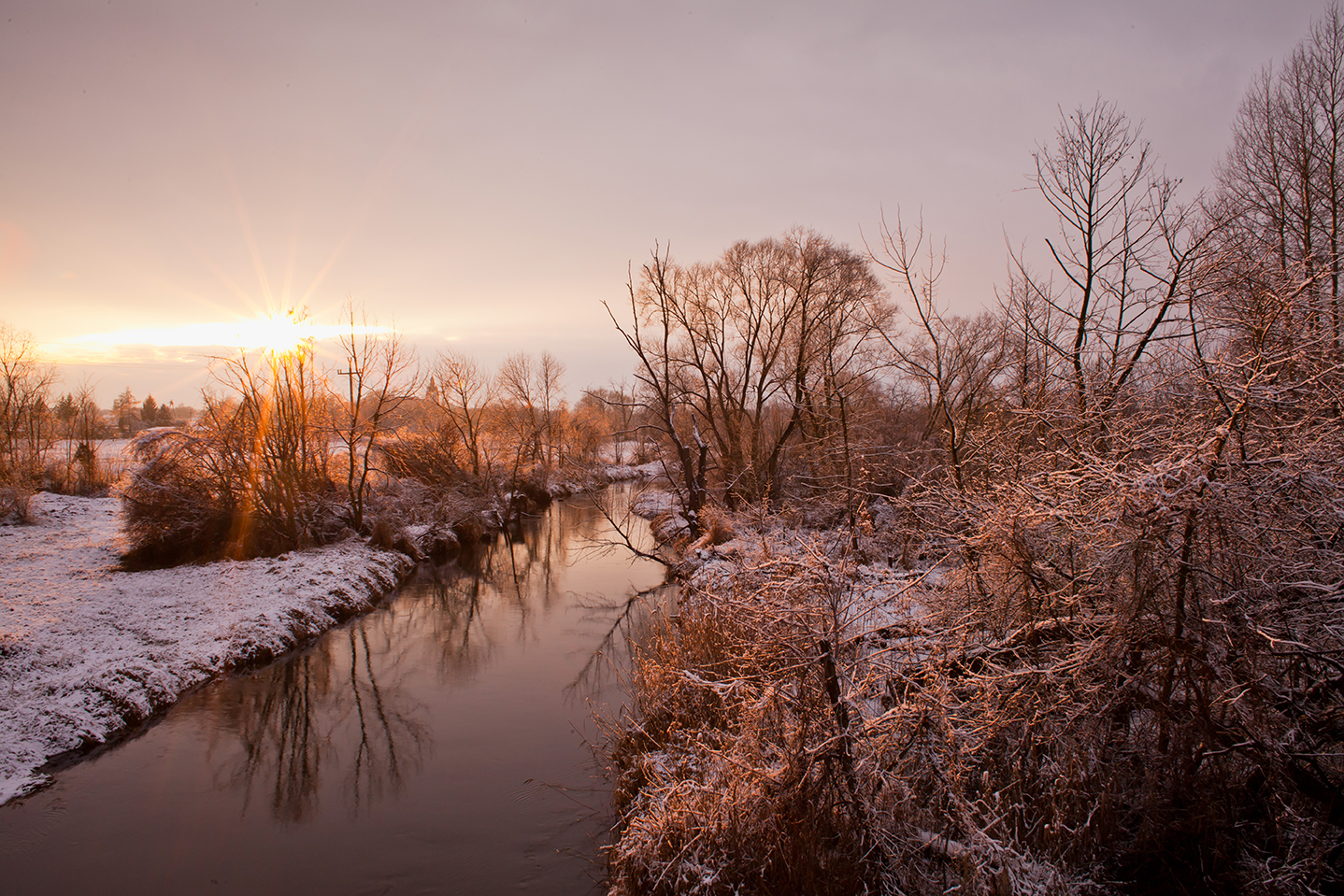 Christmas Eve always meant a midday finish, and though there were a few loose ends to tie, the bulk of the morning would be spent nattering and clockwatching. I’d turn my computer on, and probably check my emails, but even my games of solitaire would be half hearted.

In years past I would have clocked off and dashed straight to the pub, or bundled a suitcase into the boot and hit the A303 before the traffic got really bad. But we were going nowhere until Christmas morning, and that meant I could be on the river before dusk.

Conditions were good. In fact, as soon as I stepped out of the flat that morning I knew that today could be the day. A week ago, the ground was thick with snow, but a rapid thaw was followed by a settled spell of high pressure. Bright days followed night time frosts – until yesterday, when the cloud rolled in and simply sat there. It was cool but far from cold, and best of all it was still.

I headed for the bottom end, to the lower bridge pool, though this wasn’t where I’d seen the biggest fish. That particular specimen resided half a mile upstream near the upper bridge and I still wouldn’t wish to put a weight to it. An enormous, two-tone fish that would have made a good bream – let alone a roach. It was certainly the biggest roach in this stretch, and likely the biggest in the river. I’d first spotted it back in the spring when I wandered this stretch with a fly rod and the mayfly hatching. As I looked for rising fish from the upper bridge the two-tone roach drifted casually across the gravel run beneath me. Thoughts of trout and grayling vanished, though it was to be those two species that dogged me when I returned in June with a float rod and a tub of maggots. The grayling were particularly sneaky, nosing in when least expected and scattering the roach with their over exuberance. I didn’t like catching grayling in the summer, with oxygen levels low, and would try and unhook them in the water whenever possible. They were fine fine, though, and I released fish unweighed that were well in excess of two pounds.

To avoid unwanted adipose-finned interruption I focused instead on the lower bridge, where the flow eased almost to a standstill and even the trout were scarce. Here, the roach were slightly smaller, with a fair few under a pound, though a couple of the shoal members were of a size to make my head spin.

For a long time I had fished for them with bread, that being the only bait that had so far proved a temptation. I had hooked two roach on flake – but landed neither. They were from the upper bridge pool and the first of them was a really big fish. I thought I’d hooked another grayling until it rolled on the surface – and sometimes I wish that I hadn’t glimpsed it at all. Hook pulls are tough enough to cope with, but all the worse when a specimen fish is all but beaten.

Curiously, the lower shoal had shown no interest in bread, and maggot was the only bait that I had seen them take. Even then however, only one maggot in six would be snaffled. There was no discernable pattern, and no hint of competitive feeding, just that five maggots of every half dozen seemed worth ignoring.

I had seen a similar pattern at Barton Court, on the Upper Kennet, back in the days when the river there was thick with roach. The stone bridge was a prime spot, and I watched from the precipice one afternoon as Keith, an angler possessing far more skill than I, was given a red-finned run around. There were perhaps sixty fish in that shoal, with more over two pounds than under. Keith was fishing as fine as he dared and yet time and again his bait would drift through without so much as a fishy glance. The loose feed would be treated with equal indifference, with caster, hemp and maggots remaining untouched despite passing within inches of a roach’s nose, only for that same fish to suddenly slide a yard to the right and grab an identical snack. If Keith feed more sparingly, then the roach would shrink back beneath the bridge, but stepping up the rate would do nothing other than excite the trout. No matter what he tried, the roach could not be cajoled. They were stimulated, but rather than compete with one another and the more aggressive trout, they would work as one. Always leaving a good number beneath the sanctuary of the bridge and taking it in turn to push forward to the head of the shoal. Interestingly, it was only those fish at the front that were taking any food items – a peek downstream suggesting that anything they left was passing beneath the bridge untouched.

Aside from the sheer number of those Kennet fish, they differed from the roach that now swam before me in terms of pressure. Anglers came from far and wide to fish Barton Court, and through the winter barely a day would pass when those roach were not cast for. In contrast, I had fished from June until late December without seeing another angler on this stretch of river. If anyone else knew of these roach, then they trod these banks without leaving a single footprint, and I rather think that these fish were pursued by none but me.

A thick mist began to form as the light faded, and having put up a rod and nestled into the undergrowth, I began to trickle in maggots. I had peeked over the stonework of the bridge when I had arrived and found the shoal nosing around beneath the brambles that trailed down to the right hand side of the arch. This was good news – I would be less likely to spook them from the far bank where I now sat, and wouldn’t have to negotiate the thick bed of silkweed that sat in the centre channel (hmmm – silkweed – I never tried that on the hook – perhaps I missed a trick). I fed maggots in ones and twos -not wishing to draw the fish upstream or make the slightest effort to get them competing, but hoping that some of the shoal might gently stir.

All the while I was visualising my first cast. Building up a mental image of the hazards that I would be blind to when the moment actually arrived. I worked out a safe route for my rod to pass through the alder branches above and picked a spot in the stream where the float could settle safely before gentle nudging down the bramble edge.

As dusk thickened and the flow of dog walkers on the path behind me eased (all apparently oblivious to my presence – with the exception of a Jack Russell that sniffed me out and yapped his surprise), I snapped alight a starlight, baited the hook and watched as the float inched through the swim.

The flow was so negligible that each run through took some minutes, but without a breath of wind this enabled me to rest the rod and continue flicking maggots. The mist had thickened almost to fog and the starlight glowed in the darkness like a starboard lantern on a distant ship.

An hour passed, but I remained confident. A gaggle of girls giggled their way along the path behind me, heading into town and sounding as though they were well set for a blurry evening. Another half hour passed and heavier footsteps approached. There was no chatter, and no other sound save an unpleasant hawk and spit. The waft of cigarette smoke drifted into the haze – Benson and Hedges by my reckoning.

The first bite was a sudden sharp jab on the float that then lifted slowly back up. I could have hit it, but was drifting somewhere else at that moment. It stirred me nicely, though, and I was ready when the float sank again. This time it dipped sharply – no more than an eight of an inch – and then slid slowly under. It looked unmissable, yet somehow wasn’t. I felt a horrible sense of loss as I struck into nothing – as deep as the emptiness I had endured when that big roach threw the hook back in the summer.

Of course, I cast again, but did so with haste and the hook snagged in the brambles and remained there. I flicked on a torch to tie another but in a blink the mood of the night changed. The air had thickened to drizzle and my fingers were suddenly feeling the cold.

I am glad I left at that moment, as my memory has held on to the pleasure of that evening and not the disappointment. I’d had two bites. Two proper bites. And that was enough.

And as I neared home I could see the lights of our tree flickering through the lounge window, like a troop of starlights dancing down the river. I knew at that moment that I would never cast for those roach again – and I felt perfectly happy in the knowledge. The New Year would see me on a different river, where perch would be hopefully my prize. And I am certain that five years later those roach remain uncaught, and likely unknown. They will still be there though, and occasionally I still think about them. Perhaps I will go back at some point – for one more crack. Maybe next Christmas…

We normally like to release our latest film at the same time as the magazine, but Nick is putting the gloss on his latest work so it will go live at 1700 tomorrow afternoon.

Garrett was among the first group of anglers to fish Ashmead after it reopened after Lockdown, and with filming options somewhat limited due to ongoing restrictions, it seemed the ideal opportunity for Nick to take along his film equipment and capture the essence of this remarkable place and Garrett's efforts at unlocking its secrets....

Look out for a link here, or subscribe to our YouTube Channel ( www.youtube.com/channel/UCflHL8ctnY7gtyg29d627nw) for notifications of all future releases. ... See MoreSee Less

Apologies for the silence from this end. Issue 19 is so close to being wrapped up but so many balls are currently being juggled that finding the time to trim the tag-ends and tie on a hook is proving tricky.

Personal situations have turned on their heads, and given the sheer magnitude of events across recent months, it seems important that such things are also addressed in the magazine. As a result, we have a blend of words that hopefully reflect these times.

Garrett will not sign off anything that he isn't completely happy with, and hopefully the wait will be worth it. Apologies for the delay, but please be assured that Issue 19 is coming. And please enjoy the podcasts, films and articles on the website if you have not already done so. (www.fallonsangler.net)

And on a positive note, our film 'Mr Green's Rod' has recently topped 100,000 views on YouTube. Thank you all for watching.