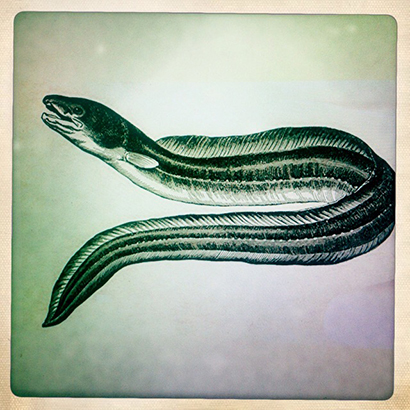 Back in May, a commercial fishing boat brought an enormous eel back into port. Despite being misreported by some sources as measuring 20 feet in length, it was still a considerable specimen and weighed over 130lbs.

Sadly, such a fish used to be far more regularly encountered, as the conger eel (Congridae conger conger) is a fish in decline. Like the freshwater eel, the conger is migratory and is believed to breed in the Sargasso Sea. The young eels will then disperse on Ocean drifts such as the Gulf Stream before finding their way into rocky ground or wrecks in the northern Atlantic. They are found all around our shores and are long loved – skulking in the shadows and growing huge. The British rod caught record is 133lb 4oz, though this may stand indefinitely as anglers are unlikely to bring fish back to shore for official weighing given the species’ recent decline.

A fish of 210lb was caught commercially and brought back into Falmouth, though that fish is dwarfed by a 350 pounder that was netted off Iceland. That is one serious eel..