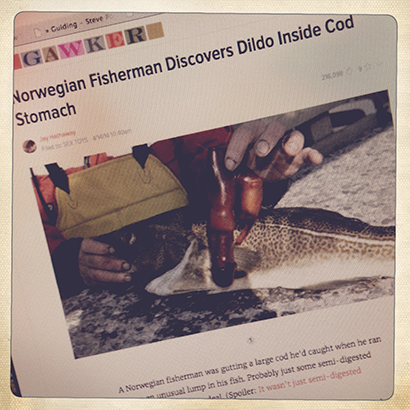 The Atlantic cod is a fish renowned for keeping a somewhat catholic diet. Being a huge mouthed predator, they tend to chomp first and digest later, and will pick up almost anything they come across if it vaguely resembles food. The natural diet of a cod will feature smaller fish, crabs, lobsters, starfish, prawns and marine worms, meaning that an artificial bait resembling any of these items may well be taken.

The stomachs of commercially  caught cod have been found to contain all manner of non-edible items, with beer cans, cigarette lighters and lumps of plastic regularly found. In 2014, Norwegian angler Bjoern Frilund found slightly more than he bargained for when he cleaned a 12lb cod he had caught. Inside the stomach was a large red….erm….marital aid that the fish had been unable to digest. Quite what the cod had mistaken it for is open to question, but Fishpool wonders if such implements may have since been adapted as lures.

Fishpool also wonders if Mr Frilund still ate his catch, or whether he found it too much to swallow….