“It has always been my private conviction that any man who pits his intelligence against a fish and loses has it coming.”  John Steinbeck 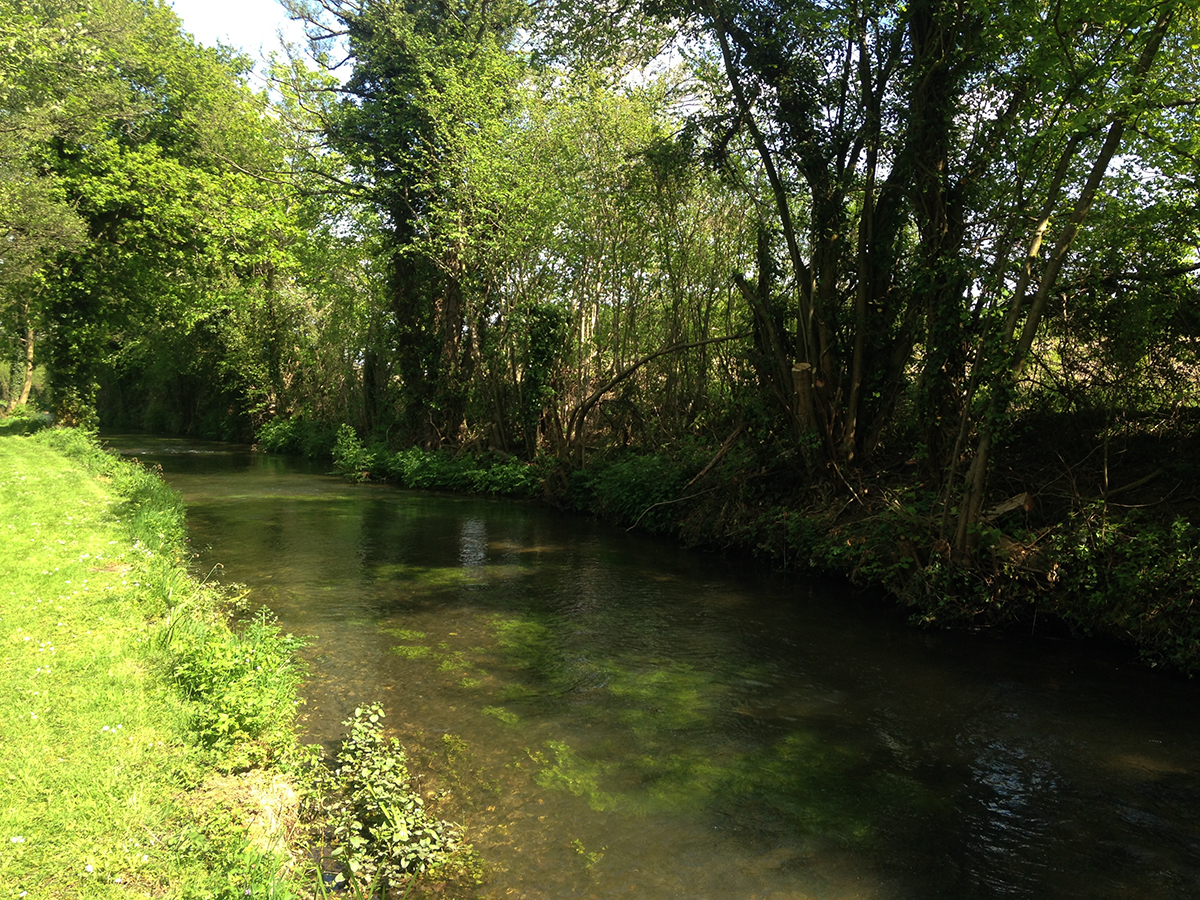 The pretty Pang of Berkshire.

No matter how great we think we are, we are quickly brought back down to earth by those finned creatures that swim and attract our longing. I have caught a few trout over the years, but a native brown trout, free to roam the river to be fooled by an imitation fly, had proved beyond me, not that I had tried that hard. But the time had come for me to pick up a fly rod and commit to it; the casting, the theory, the risk of looking foolish, but more than that; the opening of a door, the embracing of one’s past while looking to the future. I was ready.

I am heading home to Ireland in June to retrace old steps and fish the rivers my father had fished but had never had the chance to share with me. But it is not about looking back. I need to know what I’m doing. I need to know how to cast an upstream dry fly. I have been thinking about this for 20 years but had been reticent about taking the plunge. But no more. 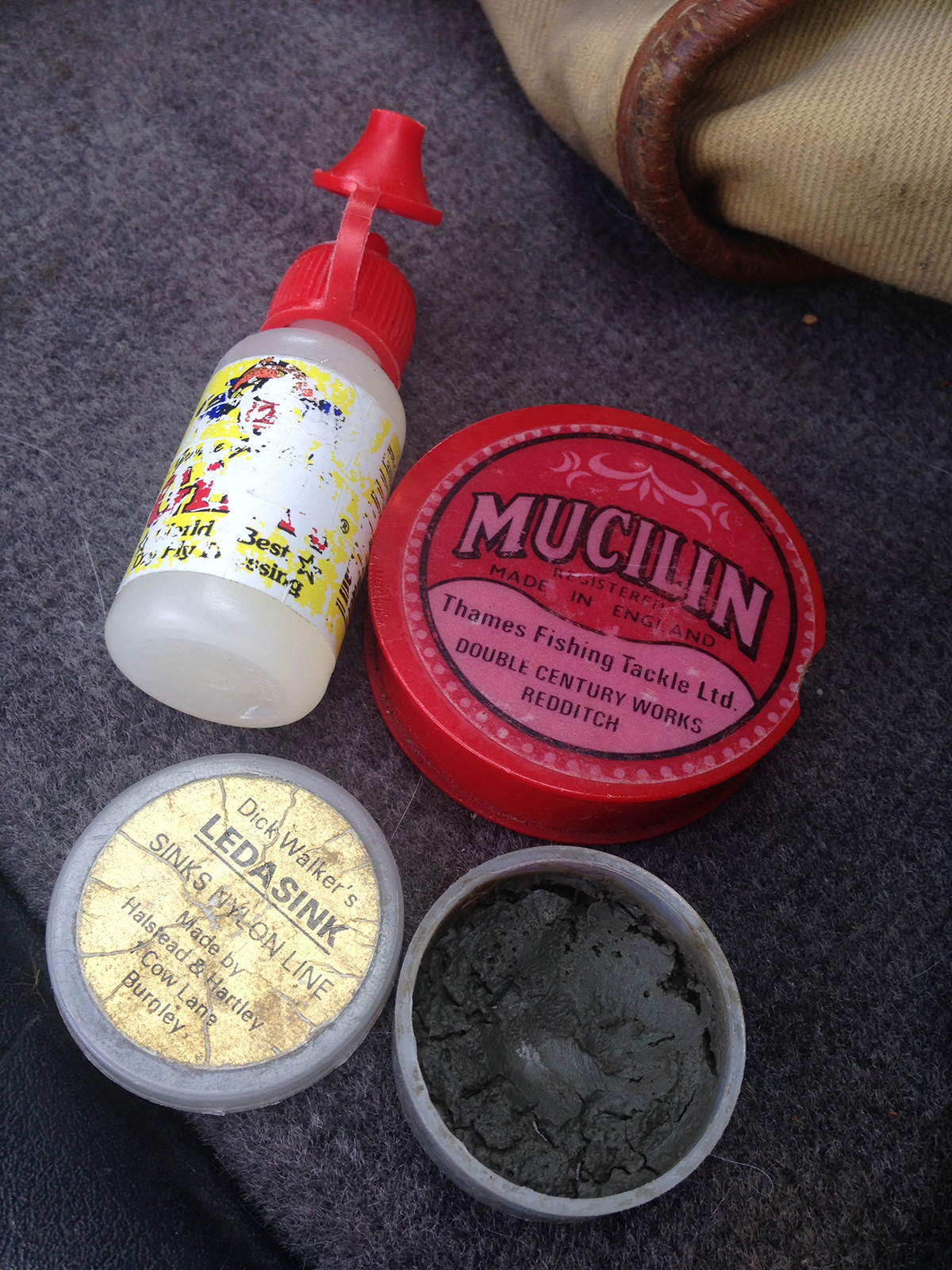 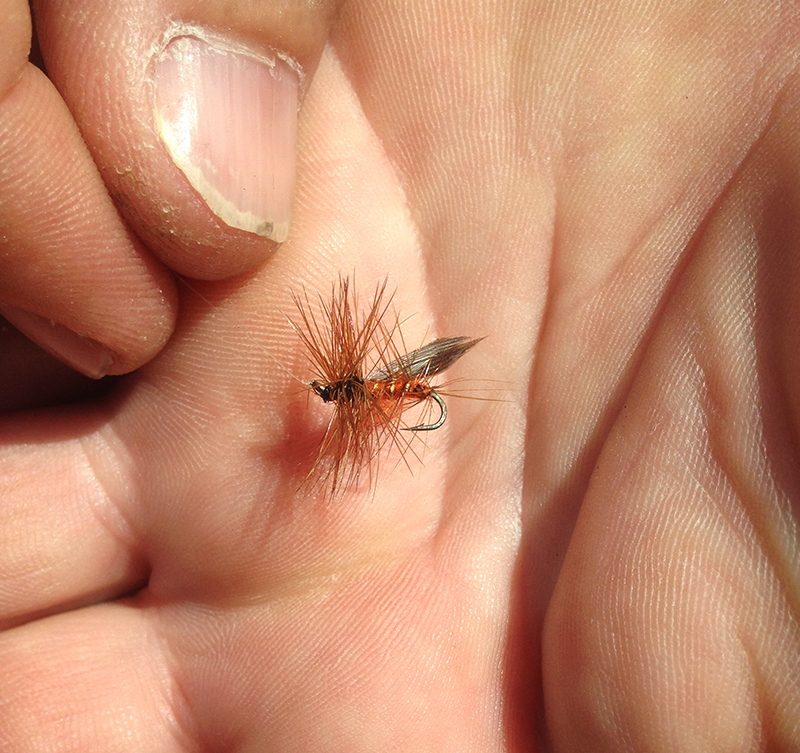 I turned to Steve Roberts of River Days and beseeched him to somehow find the patience to teach me. Soon we stood in a field under a hot sun, casting a miniscule piece of red fluff at a tuft of grass, and I truthfully struggled. The wind played its part, but my body wasn’t doing what I wanted it to, like Pinocchio taking his first steps, while the beautiful 5# Hardy tried its best not to complain. Canny advice to get on my knees and feel the casting line with my left hand (I hold the rod in my right) improved me greatly, then a final wetting of the fluff was like the sprinkling of fairy dust, and suddenly my action was almost respectable. Then Steve simply said: “Now cast over your left shoulder.” I bore the look of a man asked to mow a cricket pitch with a pair of scissors.

I remember when my father first explained the game of hurling to me as a child. He held a hurl in his hand and ran around me several times with the hurling ball balanced on it as if it were glued in place. Then he pucked the ball half way down the field and told me to go and get it. On returning he handed me the hurl and uttered some truly memorable father-son words… “Now, keep practising until you can do that, then come and show me”. So I did. It took several months, but I eventually hauled him from his business for my much-practised display, as I ran around that field with the ball stuck to my hurl, then with a mighty puck I sent that ball half way down the field with a considerable sense of achievement. ”Very good,” said my father. “You are good with your right. But, can you do it with your left?” And so the cycle would continue. There is an irony in there somewhere. 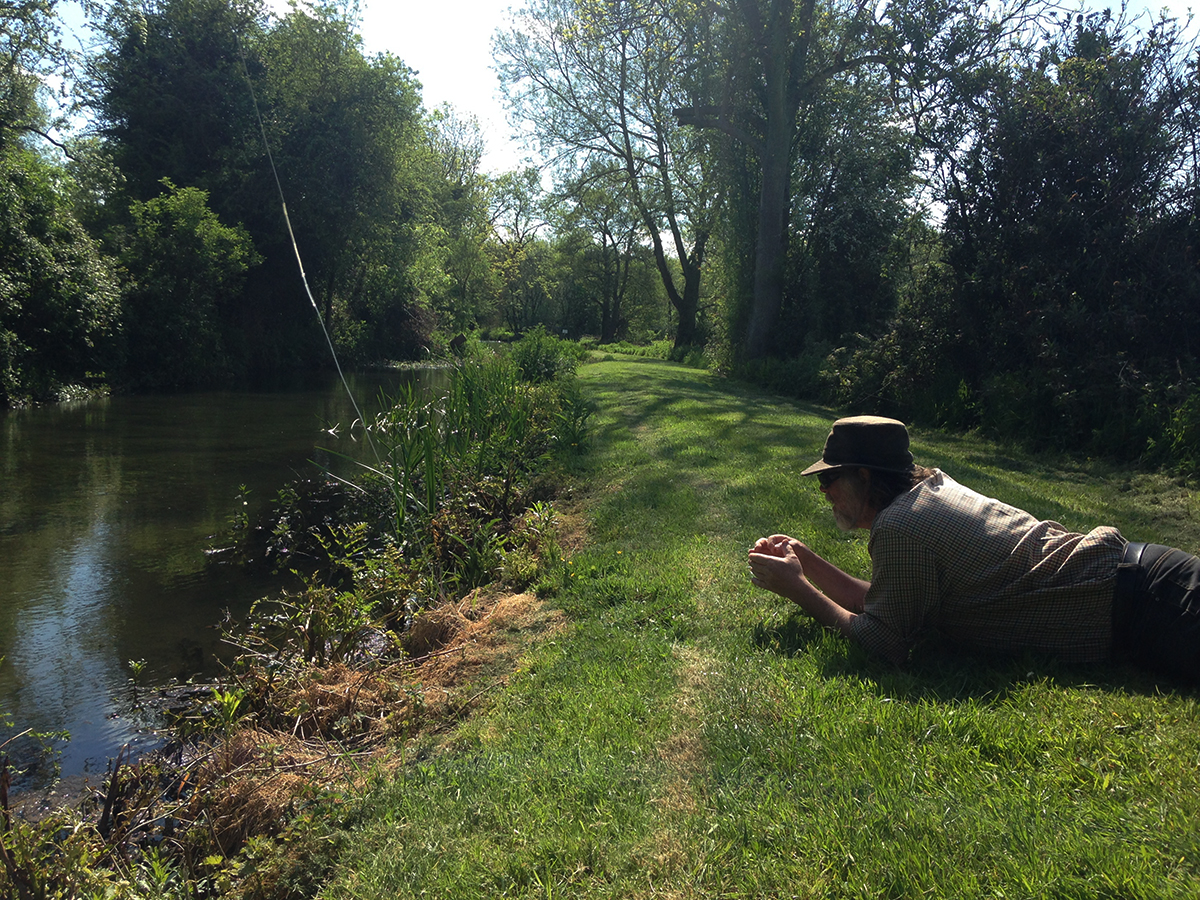 I tried casting with over my left shoulder but it was hopeless, so we strode to the river anyway. Wherever the bankside vegetation allowed, I cast over my right, but wouldn’t you just know it, the truly fishy areas were all where a cast over the left was needed. However, Steve must be a good teacher, because the tuition had stuck, and I understood what I was doing wrong and was able to correct, but more importantly, the river calmed me, everything was in its place and suddenly made sense, and soon the fly flew, and the mends were being made, and I was following the river’s currents like a hand following braille.

The Pang in Berkshire is a lovely little river, home to Ratty and Mole and Mr, Toad of Toad Hall, and I had met it before as it enters the Thames at Pangbourne, but here it is shallow enough to wade across and narrow enough to easily cast your fly into a far bank tree, but wading isn’t allowed, so snagging is ill-advised. Still, it glistened in the sunlight and its clear water couldn’t lie forever about the trout that were hiding within.

There was a small hatch of Mayfly too, and when enough of them fall on the water the trout invariably come out to play, and we didn’t have to wait long until we found one feeding. It was lying in wait a yard out from the near bank—a tiny flick of its tail taking it a few inches to the left or to the right so that it might munch whatever the river was gifting it—so I needed to fashion a cast that landed directly above it, parallel to the bank, rather than diagonally up and across the river, as I had been doing. This felt ridiculously challenging for a beginner like me, but the presence of the fish is all you need to keep you focussed. First I caught the obligatory near bank vegetation and Steve, with all the patience of Job, was called into action to commando his way across the grass and with an outstretched hand gently release the fly, then I did it again. Finally I cast properly and up she rose, but I missed! 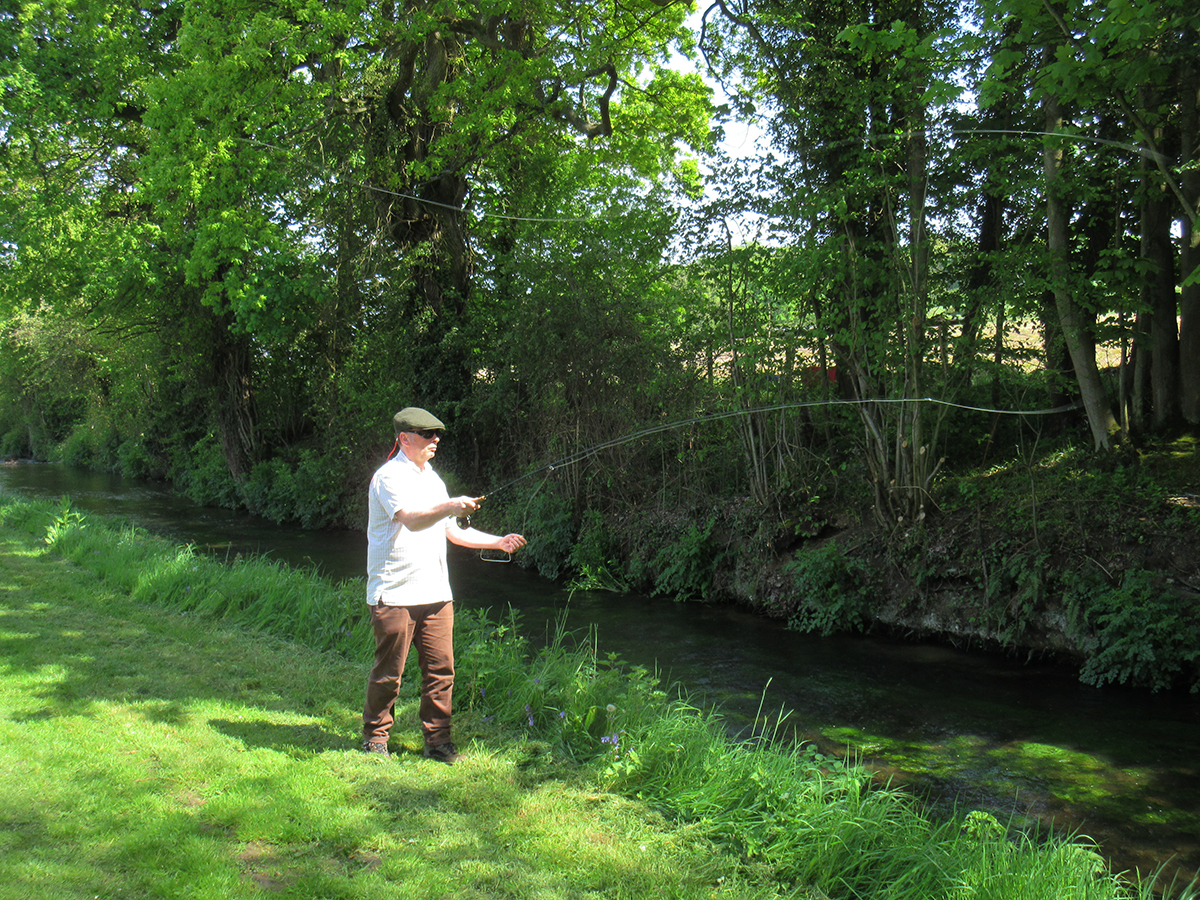 We wandered on and fished some more. We sat and smoked in the sun and watched the Mayfly dance in the breeze, and talked about Halford and Skues and other great anglers of trout. I stalked a pheasant in the long grass that flew before I got close enough for a proper photograph, and all the time the sun shone and the river flowed past and took all the problems of the world with it. It is a lovely way to fish, following the hatch, watching for the rise, stalking the trout.

We returned for the near bank trout and rose it again, but it spat it out instantaneously, then we realised it was mostly taking something from just under the surface, perhaps something making its way to another part of its lifecycle but which hadn’t yet encountered the freedom of the air. I remembered a story Tom Fort wrote about fishing an Orange Quill during a downpour of Olives on the Suir while the trout were actually gorging on Caenis, and he duly changed pattern with huge success. I then immediately segued to TC Kingsmill Moore’s boatman Jamesie: “You never know what some fish’ll take.”

So, to the brashest fly in the box, and up she rose again, but again I missed, this time just feeling the fish. Casting is one thing, but striking is quite another. Steinbeck may have had a point. The trout certainly had the better of me. Rome wasn’t built in a day and a thousand other clichés spring to mind. Then it was time to return to London. Within 15 minutes I was stuck in a traffic jam that went on for an hour but I didn’t mind. I am certainly no fly fisher yet, but I finally understand what all the fuss is about. 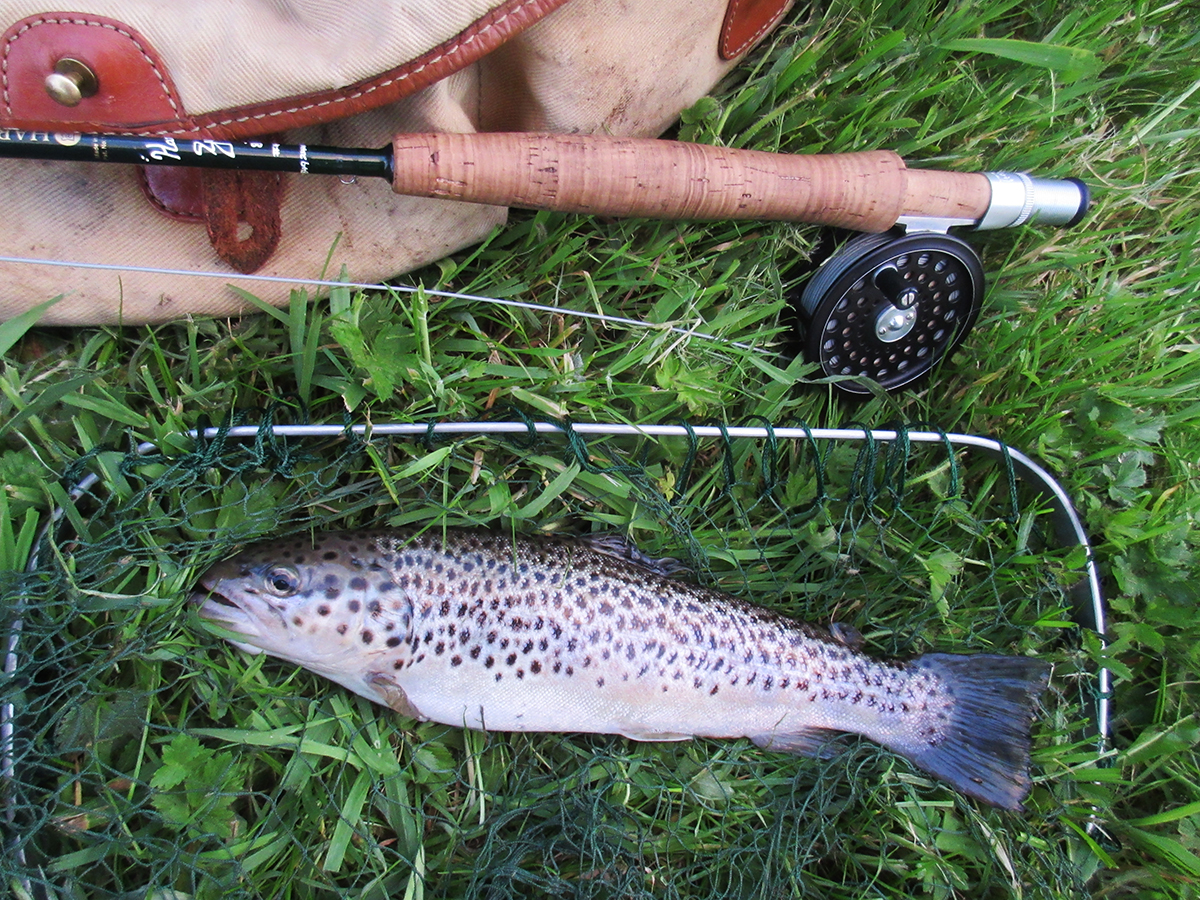 Steve’s fish, from under the ivy.

Postscript: I was needed back in London, but I persuaded Steve to fish on in my absence. Though he didn’t catch the near-bank trout (it rose again, alas he also missed)… he did persuade another beautiful small-river trout that I had cast fruitlessly at, to make a mistake.

Keep calm and carry on
Jan Porter: the man in red