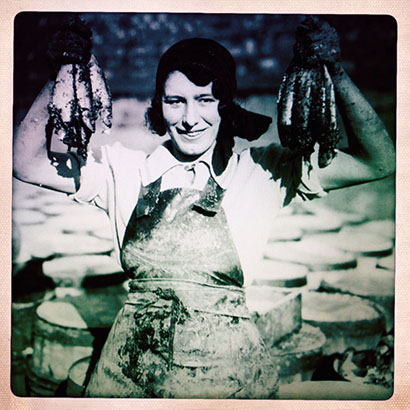 Herring fishing was once a big industry throughout northern Europe and North America. As vast shoals of fish were located and plundered before being readied for shipment across both continents, entire communities were founded upon this single process.

As Donald S Murray explains in Herring Tales, though the fishing itself was undertaken almost exclusively by men, back in port the processing of the catch was the domain of the Herring Girls.

With so many fish requiring cleaning and gutting, teams of women were formed, often in threes, who would work their way through a staggering quantity of herring each day. A skilled herring girl could rattle through 60 fish each minute. One a second – gutted and cleaned – while another would pack the fish in barrels for her two colleagues. The knives used were incredibly sharp, and the slightest slip would result in a deep wound. There was no time to dress any cuts though, and they would be wrapped in briny rags while the work continued. Many injuries were crippling, and arthritis was common.

It is sobering to hear of such working lives. Fishpool was bemoaning the cold an hour ago, but can see that life really isn’t that tough…