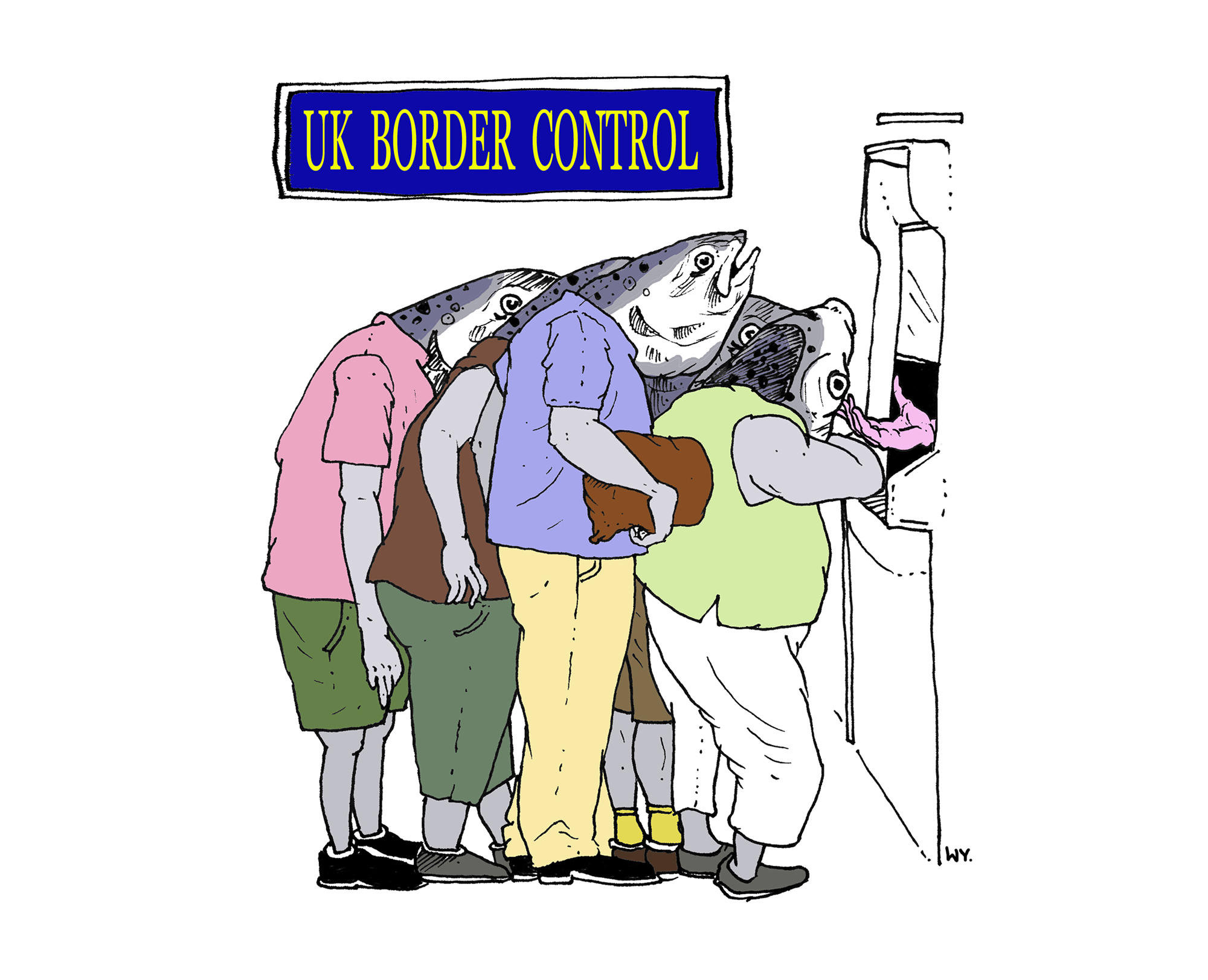 Fishpool spends most of his life dressed as nature intended. Unshackled from the suffocation of clothing and freed from the demands of modern society.

This love of naturism was probably borne in the years that followed my modelling career. A decade spent strutting and pouting and being told exactly what to wear took its toll on Fishpool. There was the drug addiction, two fatal heart attacks, torrid affairs with Kate Moss and three quarters of The Corrs (Sharon wasn’t interested) and the endless Papping and tabloid scandal.

It came as quite a relief to turn my back upon the world of material – hence my appreciation today for other people treating labels and high fashion with indifference.

Take this lovely Taiwanese lady, for example. Gifted a handbag by her grandson, she paid no heed to the maker, and instead looked at the practicalities of a smooth-finished and seemingly waterproof carrying aid. Perfect for keeping fish fresh on the way home from the market. Who the heck is Louis Vuitton, anyway?

The migrant situation is getting more confusing by the day. One moment we are demanding that our borders be barricaded and the next we are all excited because the swallows and house martins have returned. Then there’s the muddle with our salmon. Apparently, the native British ones are no good anymore, and might even be causing problems to the blimmin’ migrant ones that cruise around the Atlantic and then crowd into our rivers looking for a nice, quiet, inland residence where they can have a thousand offspring and sponge the system until they die.

Frankly, it’s all a bit of a nonsense. At least the British salmon are trying to do a bit for the economy – although someone does need to explain to them the advantage of farming on dry land. They could really struggle when they lose their EU grants in a couple of years….

What a mess – it really does grind Fishpool’s gears. Just like all those people who get all angry because they only read the headline and not the detail….

Chuck another shipworm on the Barbie, mate!

Fishpool used to loathe the catwalk. All those costume changes, the heat of the stage lights and those bloody heels…

And yes, the money was good – really good – but at what cost? I remember nothing of the black years when my dear Marilyn ditched me for the President. It was a dark, dark time and heaven knows what Fishpool got up to……All I remember is waking up in a Dallas side street in late November ’63 with grass stains on my knees and nothing in my wallet except a spent prescription for barbiturates and a membership card for the NRA.

There were happier times, of course. Snorkelling with Twiggy after the fashion week in Skegness, and Cindy Crawford’s legendary beach barbeques at her party pad in Pwllheli.

Cindy’s speciality was devilled lugworm, gathered at low tide and cooked in her secret blend of spices. She wouldn’t part with the recipe, but did lay claim to the lugs being the biggest and juiciest in the world. Lord knows what she’ll be thinking when she hears about the giant shipworm recently discovered in the Philippines. She always used to cook on a small disposal bbq from the Asda on Porthmadog Road, but you couldn’t fit something the size of a baseball bat on one of those…

Speaking of Cindy Crawford, FishPool recalls the time she plied him with 2 dozen oysters and a crate of brown ale in a desperate attempt to seduce him. I managed to dodge her advances (it wouldn’t have worked out – Naomi would have got fiercely jealous), but I have adored oysters ever since.

It came as a great relief, therefore, to hear that efforts are ongoing to restore the legendary oyster beds of the Solent. Once the largest source of oysters in Europe, the previously rich waters off the Isle of Wight have been too long plundered and fishing had to be banned in 2013.

The recovery effort is not only good news for Fishpool’s libido, but also for the water itself. A single oyster can filter over 200 litres of seawater every day, helping combat pollution and excess siltation.

One of our Nessies is missing!

Remember ‘The Usual Suspects’? And that epic line – ‘The greatest trick the devil ever pulled, was convincing the world he did not exist.’….?

Well, it seems that Nessie might be lulling us into a similar false sense of security. Because, apparently, the Loch Ness Monster is missing.

The more cynical among us might immediately question how something that has never actually been proven to exist cannot really be ‘missing’. The particularly cynical among us might even go so far as to suggest that this story be little more than a cheap attempt for some publicity, perhaps to boost tourism or at the very least gain a few more clicks for the webcam.

However, Fishpool is no cynic, and in order to prove the point would be willing to go and visit Loch Ness in order to undertake a thorough search of the loch. A Walker Avon Mark IV and a spool of 8lb Maxima should do the trick. I’d kick off with double maggot on a size 14 and go from there. Perhaps Editor Fallon could commission me for Fallon’s angler Issue 10? With expenses, of course……