By Garrett Fallon on September 2, 2017 in ALLAN’S FANGLER, SMALL FRY 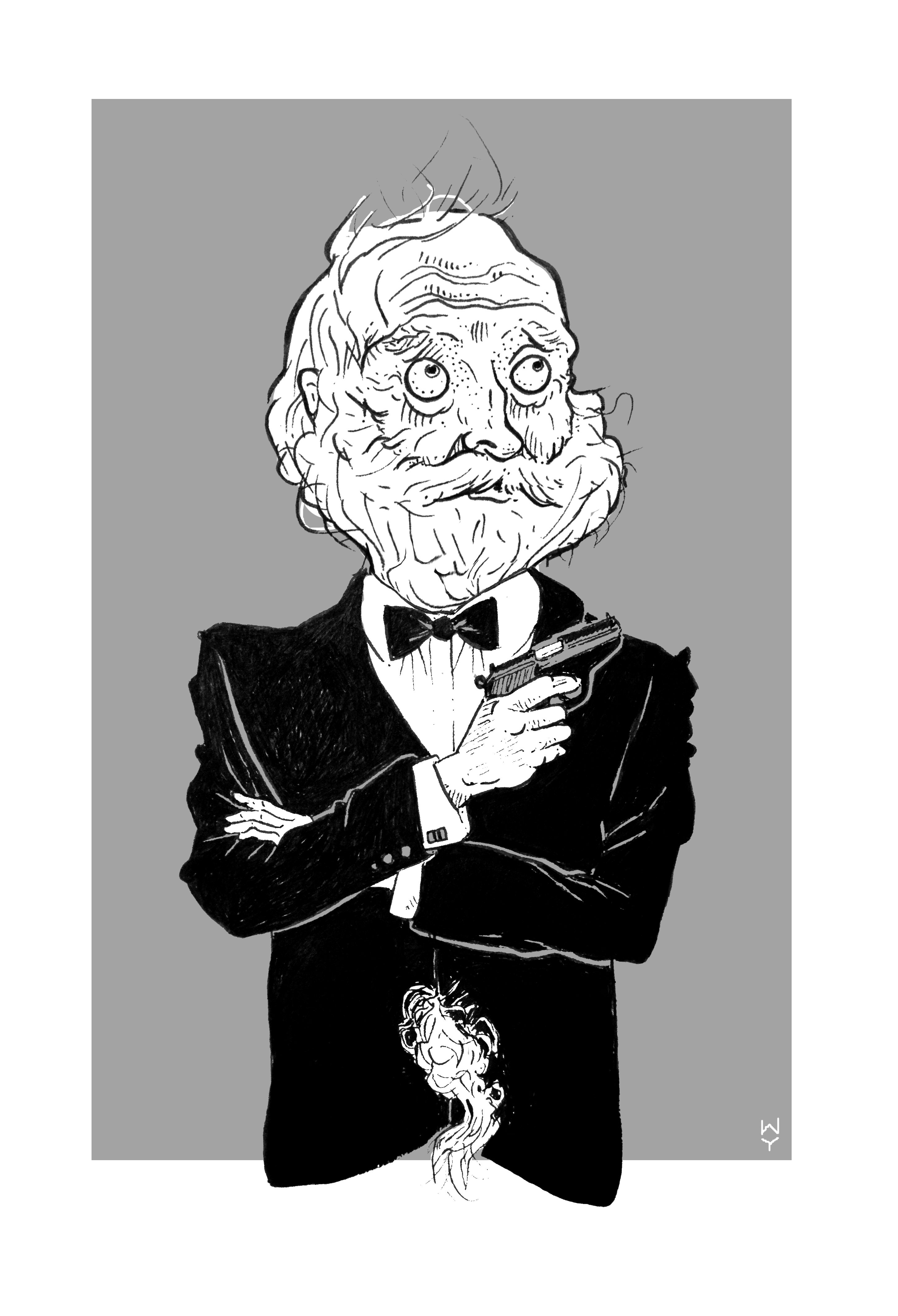 From Russia With Love?

Fishpool received a slap in the face a few weeks ago. Having enjoyed watching my mate Feds win Wimbledon for an eighth time (from the comfort of the Royal Box in fact – I was just behind Wills and Kate), my agent called to say the BBC had given the Doctor Who role to someone else. Apparently, my behaviour at Glastonbury Festival did not reflect the image that they felt was required for a children’s television programme. And so it seems that my antics with one time-travelling overlord (Lord Buckethead) has hindered my chance of playing another.

I was a little disappointed of course, but my agent did bring positive news about another upcoming role. I can’t reveal too much, but I SPY a major opportunity, and (despite what you may have read in the papers) and although I would be breaking a secret BOND to share the exact detail, I’m sure these words are FOR YOUR EYES ONLY.

For the more astute among you, there is also a tiny little clue in the headline of this piece – a nod to the rather alarming number of pink humpbacked salmon that have been turning up in Scottish rivers this year. Normally found in the waters of the north Pacific, and well known for being a favourite snack of grizzly bears, there is a suggestion that these fish are offspring of an attempted introduction in Russia 40 years ago.

Perhaps they have been bugged or fitted with cameras and ejector seats…. or maybe they are KGB agents in very small disguises… if only there was some kind of secret service figure who could infiltrate the Kremlin and find out…..

The Man with the Golden Grains

Fishpool had a bit of a run-in with Hollywood megastar Bradley Cooper at Wimbledon. I was trying to keep a low profile before the mixed doubles final (it’s a long story, but I’m not allowed within touching distance of Heather Watson and Martina Hingis…), when Cooper appeared for a crafty bowl of strawberries. He’s got a major problem with soft fruit, regularly exceeding his five-a-day before he sits down for breakfast, and though we normally get on pretty well, he can get spikey when he’s on a binge.

It was all fairly amicable until he asked me what bait he should use for the tench in the long water at Hampton Court. I suggested corn, and he immediately whipped his phone out and purchased a sack-full. The problem being that he’d gone and ordered maize—not sweetcorn, and by the time we’d noticed the loss in translation he’d lost signal and couldn’t cancel the order.

He’d had too many strawberries and totally overreacted. In fact, if Sue Barker hadn’t turned up to calm things down it could have got really nasty.

Anyway, if you thought that tale was the daftest sweetcorn-themed nonsense you’ve heard today, wait until you read this…. I mean, really??

Fishpool has been learning a couple of new languages for his forthcoming audition. Russian and Mandarin ought to cover all eventualities, though I’m chucking in a few Korean phrases (with a north of the border accent) too.

The script is top secret, but I can reveal that it’s got quite an identifiable, topical feel about it. Without giving too much away, it’s about a bloated narcissist with designs on world domination. In stereotypical espionage-based style, he isn’t a politician, but a money crazed businessman who manages to bluff his way into power through a campaign of smear and social media hysteria.

Because he’s got ulterior motives, he convinces people that climate change is bogus, and that anyone who cares for the planet is a namby-pamby. He ignores the ‘scientists’ and claims the increase in extreme weather is due to us not burning enough fossil fuels.

Of course, plenty of people see through this, including some of his henchmen, so he decides to start a nuclear war as a distraction. Someone has to stop him – and that’s where my character comes in…

I imagine the filming will be done abroad so I’ll be stocking up on sun cream and sombrero’s. I saw ‘Pi Newood Studios’ mentioned which sounds Mexican, so if I get the part, think of me in my shorts supping tequila while you’re all getting sodden….

It’s funny how we embellish things. They aren’t lies as such, but a touch of anthropomorphism here and there designed to stir human emotion and tug at the heartstrings.

Take this clip, for example. The whale and dolphins are interacting, but the suggestion that they are ‘playing’ is a little bit presumptuous.

Nevertheless, it’s a pretty cool video and well worth 20 odd seconds of your time……and perhaps Fishpool needs to lighten up.

Fishpool learned of some sad news this week. Bigwig, the hero rabbit from Watership Down, has been found dead.

To be honest, I didn’t have a clue he was still alive. After all, Hazel (who, now I think about it, sounded a little bit like John Hurt), died at the end of that 1978 documentary. Not long after Bigwig had nearly perished at the paws of General Woundwort.

I presumed then that Hazel and Bigwig were of a similar age so for the latter to live for another 39 years must be some kind of rabbit-ine record. Mind you, judging from the photo in his obituary, he hadn’t aged all that well. He’d really, really, let himself go – possibly a reaction to having gone completely bald and losing all his legs.

In fact, and I know I shouldn’t speak ill of the dead, Bigwig had started to look a bit like a fat, bloated carp…