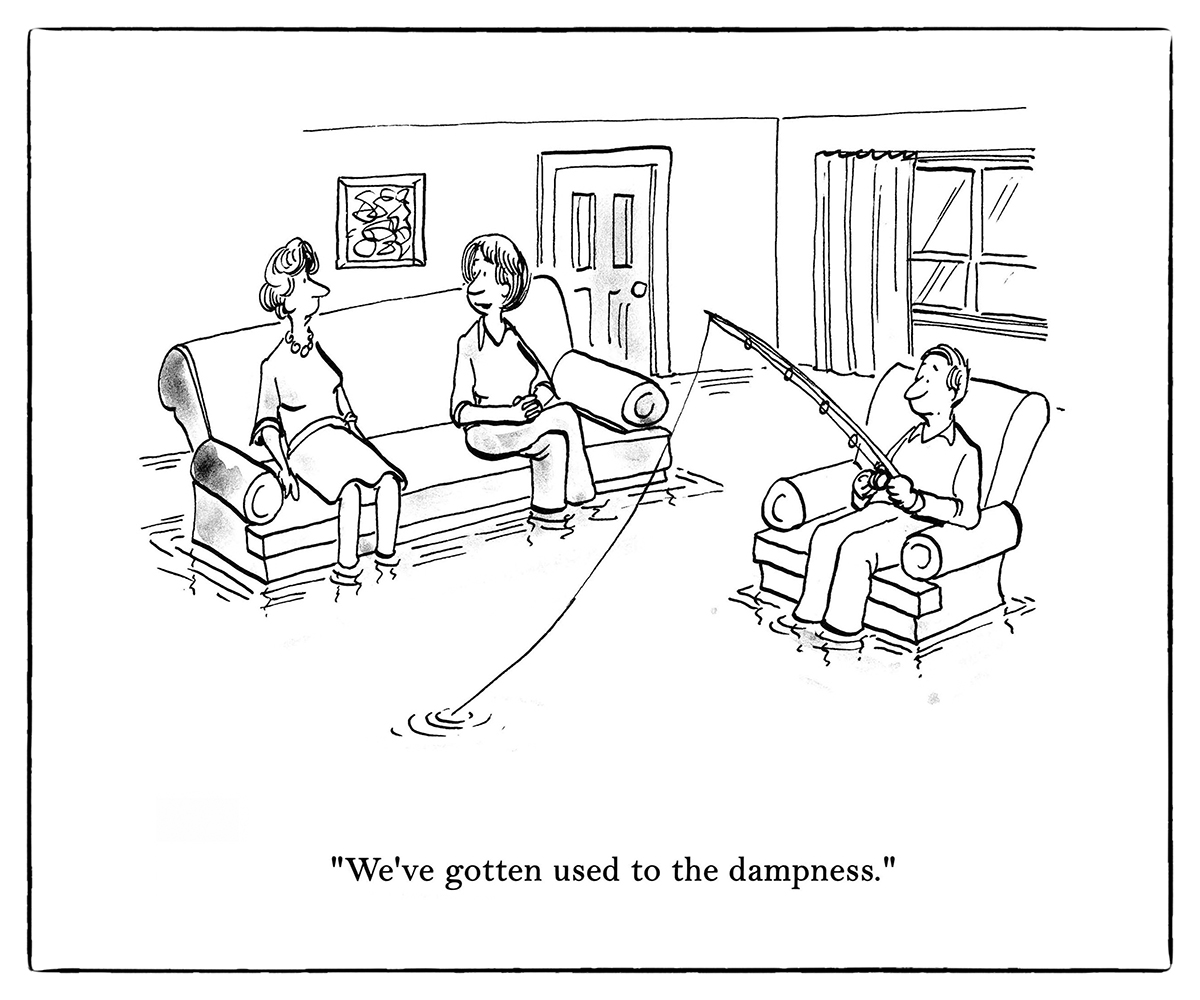 The picture above has absolutely nothing to do with any of the stories below, but it made us laugh. Courtesy of Cartoon Resource

We’ve seen a fair bit of sunshine this month but it has been accompanied by a stiff breeze—invariably from the north. As a result, the dryfly season has not exactly got off to a flyer. If the rivers aren’t on fire here yet though, then spare a thought for anyone wanting to fish the Condamine River in Queensland Australia. Earlier this month it literally was on fire.

In order to demonstrate the side-effects of fracking, MP Jeremy Buckingham took a barbeque lighter out onto the Condamine and flicked a spark over a bubbling release of methane.

And indeed it was. Quite how it was extinguished isn’t clear, and though the Government funded Independent Science body—the CSIRO—argued that the emission is a natural occurrence and nothing to do with nearby fracking activity, this is a story that will smoulder for some time yet.

Meanwhile, in Kent, a carp angler was lucky to escape with his life having been woken during the night and savagely mauled by a fox. Or so the red-tops would have us believe.

The Sun, Mirror and Angler’s Mail (it’s got a red-top….) all led with slightly melodramatic headlines—‘Angler almost blinded!’ for example—though the reality was slightly less sensational. Attracted by the whiff of a sandwich (M&S, no less) the fox crept into Dan Hedges’ bivvy and scratched him accidently as he shooed it away.

“It was surreal to be honest,” said Hedges, with notable understatement.

“I could see he was blanking and just wanted to make sure he had at least one run…” said the fox. Possibly.

One of the finest captures of the spring so far was made by Peter Fine on the Royalty stretch of the Hampshire Avon. Taken in the last week of March, Peter hooked a huge cock fish on a Park Shrimp from a pool known as Edward’s and landed it 400 yards downstream in The Pipes. It measured 48 inches from nose to fork suggesting a weight well in excess of 40lb—the biggest from the Royalty for 45 years. Peter fished on and landed a 20 pounder for good measure. That is some brace of fish…

Zeb Hogan has been exploring deeper into the world’s waterways in the search of Monster Fish for the National Geographic Channel’s television programme of the same name. Anybody familiar with the ITV and Animal Planet series River Monsters will understand the premise. But whereas Jeremy Wade ventures up the Zambezi having heard rumours of a terrifying people-slaying kraken which he must catch in order to de-mask and demystify (a lot like Scooby-Do when you think about it—but without a dog. Or pretty girls. Or cravats.), Zeb is doing it all in the name of conservation.

With 70% of the World’s freshwater ‘Megafish’ at risk of extinction, Zeb (who has a Ph.D. in Ecology) is aiming to educate and preserve. He has tagged more than 3000 catfish that he and his team have bought from African fishermen and released on less pressured stretches of river. He sounds like a good man—and certainly an issue that needs highlighting.

The Angling Times this week broke with tradition as it unveiled a new, glossy magazine look. One reader on Facebook claimed ‘Will try it, but if I don’t like it I won’t buy it anymore.’ A revelation that Editor Fallon wishes he’d considered before buying his thousandth jar of Marmite at the weekend.

The apparent similarity to Anglers Mail has not gone unnoticed, but made-up AT Editor Pat Fitzstevens assured readers that, “Any Resemblance to Angling Magazines, Living or Dead, is Purely Coincidental. We simply realised that the old style newspaper was a bugger to handle when sitting on the toilet…”

The magazine certainly carried a story worthy of its new look. A tench weighing over 17lbs that was netted by a couple of predator anglers from that well known Southern Stillwater, ‘Undisclosed’. The tench (who was unavailable for comment) didn’t look particularly well, and was likely water bound, but nevertheless it provided an eye catching headline.