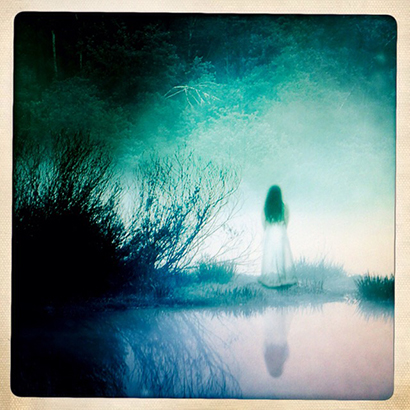 Perhaps it is because we spend too much time staring at rod-tips or motionless floats, but whatever the reason, anglers do seem particularly prone to seeing ghostly apparitions. Almost everyone has a creepy tale to tell, so what is it that makes people of sound mind go all aquiver – particularly at night?

Many pools and lakes are supposed to be haunted – perhaps the most famous being Redmire (see Places we Like). Eerie occurrences have long been reported here, particularly in a swim known as The Evening Pitch. Here, childrens voices have chattered in the darkness, strange black figures loom, phantom bicycles pedal, and a ghastly green apparition with burning red eyes will scare you to your core.

Some laugh off such tales, but rumour has it that a local vicar was invited and performed an exorcism, so intense had the experiences got.

More recently, the ghostly goings on have been in the lake itself. That lovely Leney strain (see People we Like) has been threatened by an introduction of ghost kois. Fortunately, an expert has been called in and a further exorcism is underway.