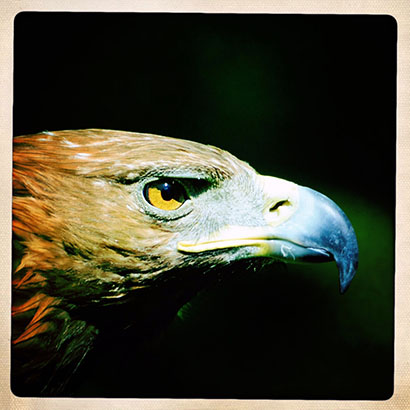 Every morning in early spring, a gaggle of birders gather near the Cumbrian lake of Haweswater, clutching telescopes and gazing anxiously at the skyline. They are here to catch a glimpse of a male golden eagle displaying. Since 2004, when his 28 year old mate disappeared, England’s last golden eagle has displayed in vain for another female to share his Lakeland home. Sadly, illegal persecution has driven the species away from the Borders and any hope that an English population will endure is almost gone.

On a positive note, in Scotland, away from areas where the eagles may come into conflict with Man, the goldie is doing okay. There is a stable population of well over 400 pairs and in some parts of the Western Isles – on Mull and Skye – the population is as dense as anywhere in Europe.

They have a wingspan of up to 7 ½ feet and a female may weigh as much as 14 pounds. Though they may take the occasional lamb their staple diet is carrion, rabbits and mountain hare.

These are one of the most majestic, awe-inspiring birds in Britain, and it is sad that it will soon be lost to England – shame on Man for making it so.