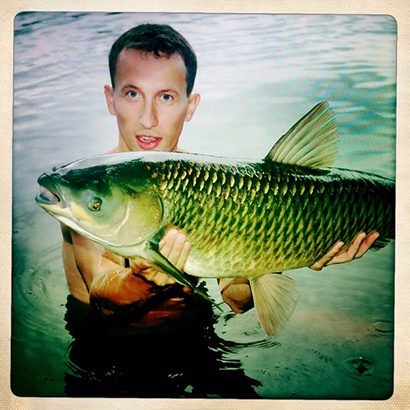 Native to eastern Asia, the grass carp (Ctenopharyngodon idella) is a fast growing Cyprinid with a large mouth and cigar shaped body. They superficially resemble the chub (Squalius cephalus), and confusion has led to more than one erroneous chub ‘record’ claim.

Grass carp grow large, with specimens reaching nearly five feet in length and weighing over eighty pounds. Their fondness for a vegetarian diet has led the grass carp to be introduced across the globe where they are stocked as a means of weed control. They are widespread but uncommon in Britain, and are not believed to have successfully spawned here – needing a water temperature in excess of twenty degrees Celsius in order to do so. Nevertheless, individuals have been caught in excess of fifty pounds – though the species is no longer recognised on the official record list.

Grass carp are commonly farmed as a source of food, though you are unlikely to find them on the slab at your local fishmonger. Despite the noble efforts of Hugh Fearnley-Whittingstall’s River Cottage this is a fish yet to capture our culinary imaginations.