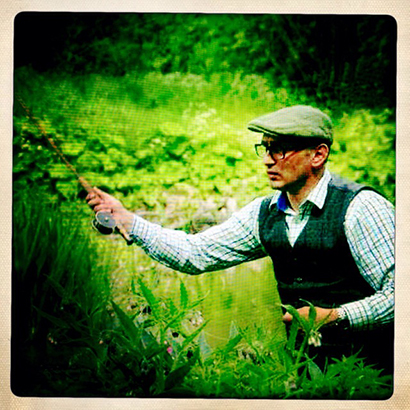 One half of German pop group JaKönigJa (alongside wife Ebba—see Issue 16 of Bits and Pieces) Jakobus Durstewitz is a man of many talents. He is an artist—self-taught—and has exhibited in Germany since 1994. More recently his artwork has featured in the hallowed pages of Fallon’s angler (Issue 3).

JaKönigJa have been wowing critics for over twenty years, and are currently working on their sixth studio album, while Jakobus has also turned his hand to acting, and starred in the 2008 feature film Madboy.

In his spare time (if he is able to find any) Jakobus is an angler, and loves nothing more than spending time on the river bank with a piece of cane in hand. He is a lover of traditional tackle, and is a proud member of TART (Traditional Angling, Retro Tackle). He also builds his own split-cane rods, some of which have recently been finding their way onto British riverbanks. Is there anything this man cannot do?