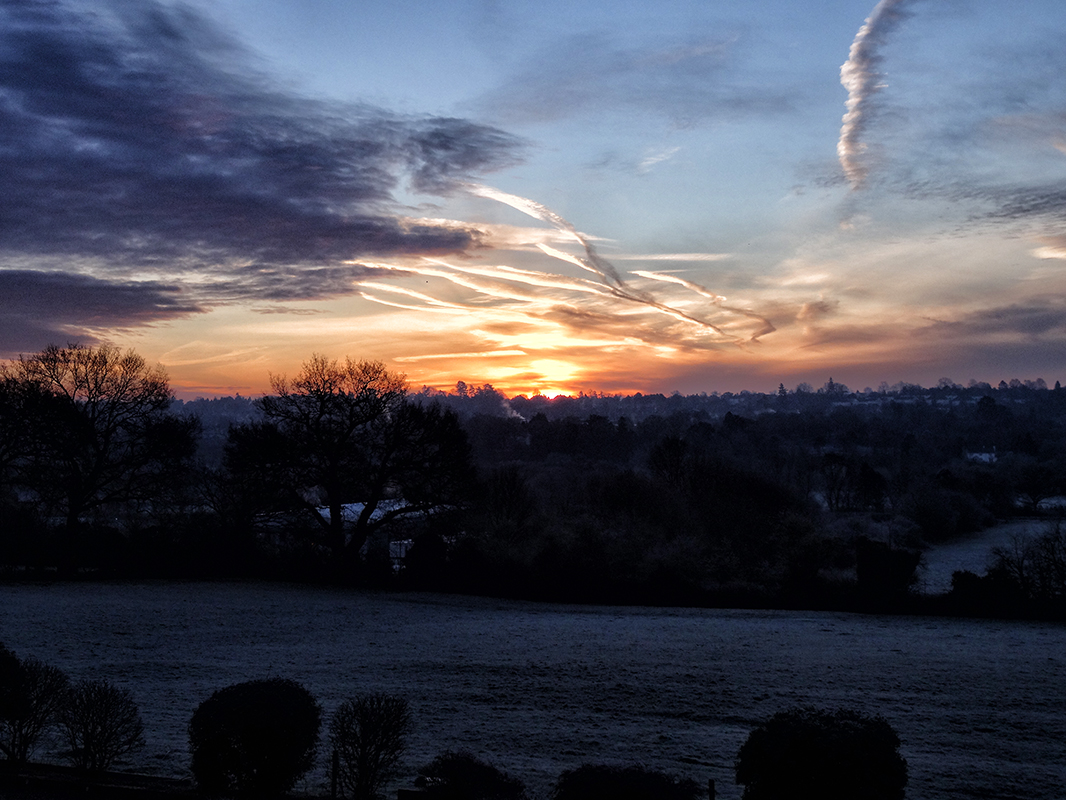 New Year’s “fabled infant” comes to me stillborn. After the festival of Christmas I cannot shake off January’s slump; the winter bears down, the dim fairy lights in house windows, waiting on Twelfth Night, are relics of a better time.

Fishing in January is usually hard; floods are expected and cold winds from the north anaesthetise the river. Stillwaters draw me to them in this dank bone-chilling weather, their moodiness a companion for my own. I used to fish a narrow arm in the corner of a lagoon attached to the main pit. Here the roach gathered during the cold months, and some very good catches were made. They were pristine and ran to over a pound.

The question, when I arrive at the gravel pit, concerns the state of the surface. Is it frozen? The water is clear of ice close to the bank and beneath the trees at the end of the long thin arm, but the ripples from my feet stop at an invisible barrier a few yards out. Throw a little stone, a muted chime sounds when it strikes the ice. I only have the little patch of clear water in front of me.

I didn’t expect to catch anything; I thought the roach would be motionless somewhere beneath the ice in the inky water. The water is not coloured: it is the decaying leaves on the bottom and the ranks of leaning willows blocking the light that give the water its blackness. The soil has lost purchase on roots and some of the trees lie in the lagoon, their drowned branches havens for the pike.

Bites come but they are few and I miss most of them. A small roach, steely flanked, on a maggot, then later another on bread. Soon enough the float moves no more and I leave the darkening water to the pair of ducks sifting around the margins. 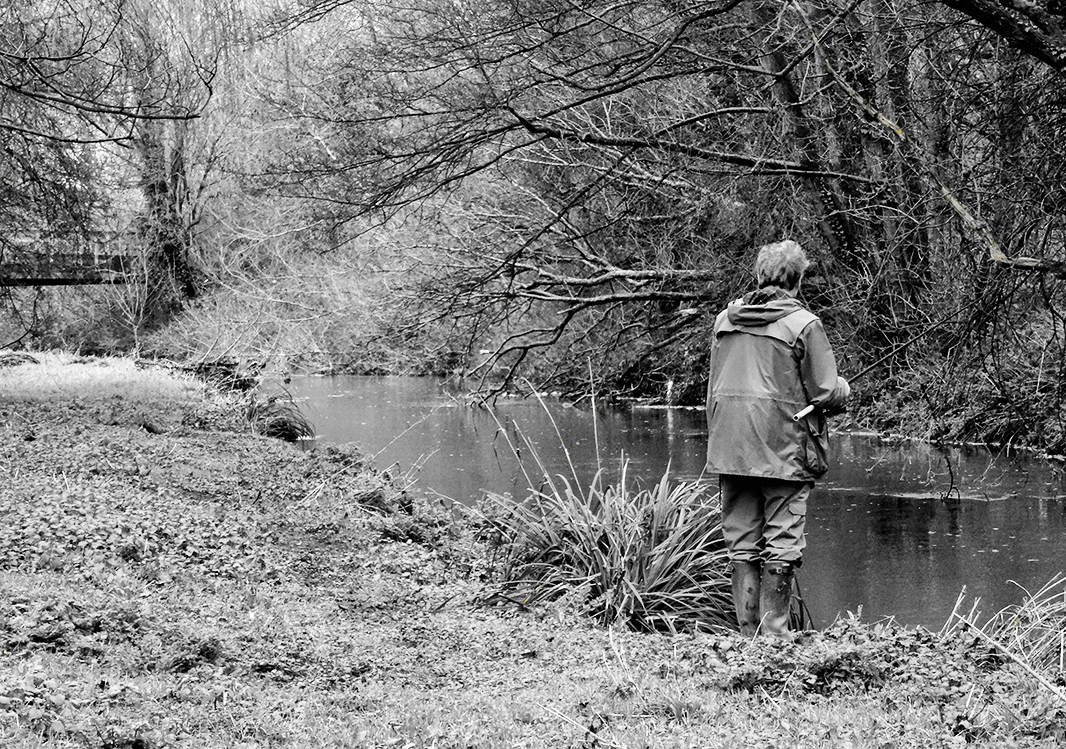 Redwings and fieldfares turn up late in January and I feel winter moving on. Once again I sense another of the interleaved fishing seasons slipping away while the tackle bag and rod holdall adds to its film of dust. The moment comes when there is no use in waiting for the right mood; something must be done to avoid another year passing, another year of disuse for the coarse fishing kit in various corners.

I look into the dark past of my rucksack and pull out the reels, watermarked and sprinkled with maggot sawdust and remnants of groundbait. Not a full clean and service, just a wipe over, a drop of oil on dry handles and spindles and a test of the line strength. The line is still good. Then I handle the floats, light and delicate, piled into compartments in the space-saving wooden box I made a few years ago when I abandoned the conceit of laying them out in rows on green baize. Floats, flies, sea fishing rigs — rosaries to the angler.

The question I need to answer now is where to re-emerge as a coarse fisherman. The River Thames enchants me. Copious book-reading in childhood imbued my fishing sensibility with notions of roach, fine tackle, tiny bites, ancient anglers who practise a fine art. The long deep draw of the river innervates these memories and I’m urged to cast a float into the mythical stream. I am a fishing romantic, which is a gift and a curse.

From February the season moves briskly towards its close; there is no time to waste yet I waste plenty. The winter thrushes go north, the song thrush starts to sing in the mornings, the chaffinches trill. There is a club water above Windsor. The river is low and clear, the current listless. Strolling the bank, looking for a hopeful swim I feel a pang of optimism as the river draws me in and I picture the dark gravel bed and indeterminate fish. An hour later I give up on the float rod and lob a feeder into the middle, sit back and feel the warm sunshine on my back. Someone speaks behind me, a retired fisherman just out to see what’s being caught, untidy hair and a skeletal face. Not one bite, I tell him. It’s the cormorants, he replies. I can’t deny they were about, three so far, diving the other side of the river or flying upstream. Yet the Thames has always had variable fish populations; one year would be awful, another full of fish all along the river. Now the cormorants get the blame and
maybe they deserve it. “Last winter we used to get 80 paund o’ roach,” said a fishing geezer to me once, “nar we don’t get nuffin’ since the bleedin’ cormorants.” But next year the Thames is full of roach and the cormorants are still there. 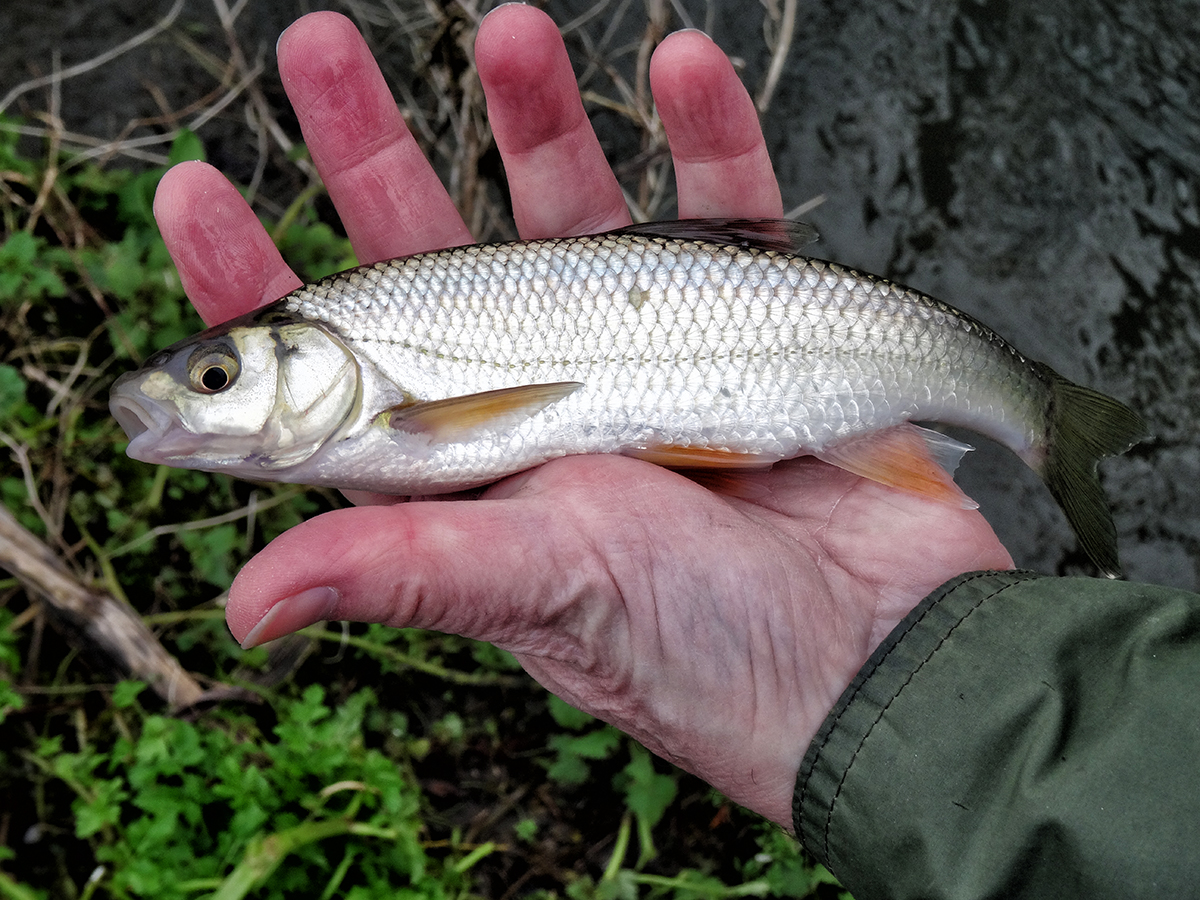 My local stream, a fishing rod, a few floats in a waistcoat pocket. An hour or two wandering around, casting into runs eighteen inches deep with a piece of bread flake. The dace never let me down. From streamy laminas they burst in silver against the water’s grey. Are they the most cheering of fish? Or is it the lengthening days, the muddy boots put away for the spring that tell us, like Larkin’s budding trees, to “Begin afresh, afresh, afresh”.

Photography by Nigel and Rosie Ling