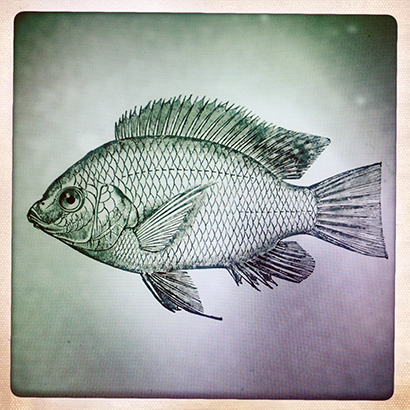 Now a familiar sight on supermarket fish counters, the Nile tilapia (Oreochromis niloticus) is, alongside the Mozambique and blue tilapia, one of the most important commercial fish species in the world. Native, as the name suggests, to Africa and the Middle East, this fast growing species is now farmed throughout the world, with more than 1,500,000 tonnes produced every year – only carp are farmed to a greater intensity.

The tilapia is a deep-bodied cichlid, with large eyes and a dorsal fin that runs along most of the back. They grow to a maximum size of around 8 pounds in weight, though most shoal fish are significantly smaller.

Man has long targeted the tilapia as a source of food. In fact, they were one of the principle species targeted in the Sea of Galilee in Biblical Times and a tilapia is believed to be the species holding a coin in its mouth that was caught by St Peter. The tilapia is often referred to as ‘St Peter’s Fish’, though this is also a title also attributed to the John Dory.