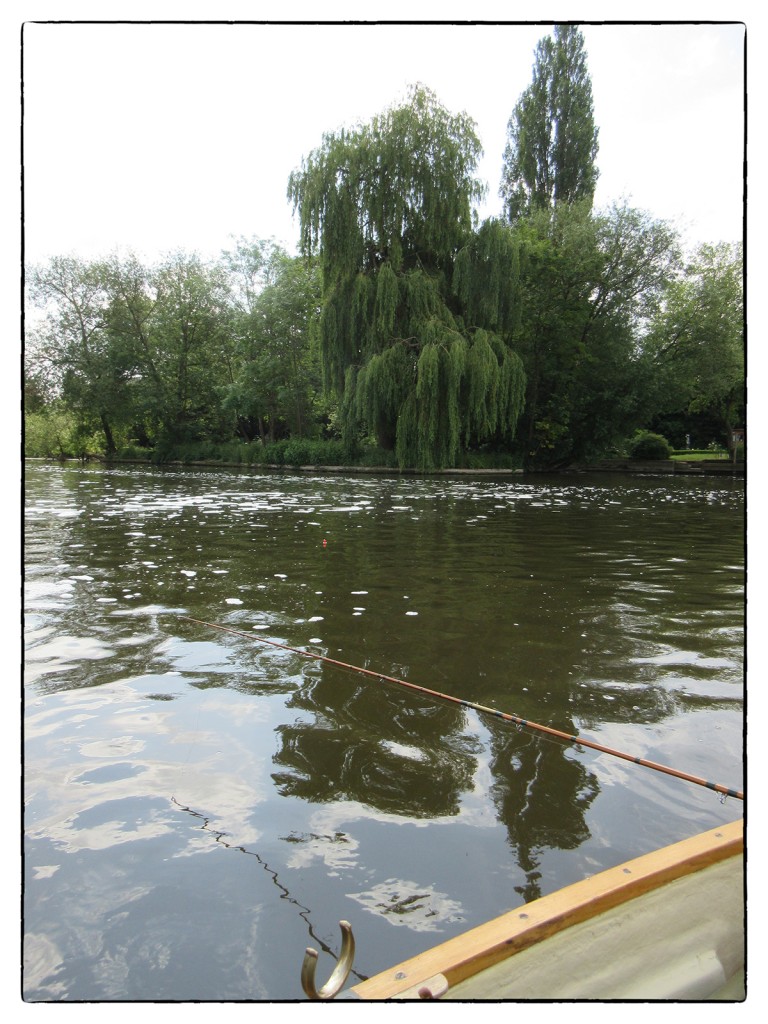 Words and pictures by Steve Roberts.

Peace. Tranquil expectant peace. I sat in the boat waiting, the only movement the lazy passing of the foam from the weir, and some stirrings from a tent away downstream. A girl’s tired face peeped out and looked at me curiously as her boyfriend mixed up and lobbed out some evil smelling groundbait. The expression on her face described the aroma. It was not coffee.

I had gulped mine down an hour ago, and here I was now with the boat all prepared and waiting for the client. In the quiet of the early morning I had wished my fellow anglers well as I drove the lanes to the river. New born light filtered through the trees, and I thought of the mist rising from the lakes and rivers my brothers were sat by, bathed in the delight of a new born season.

After hearty handshakes and the ship shape stowing of rods and bags I turned us around and gently rowed upstream to the pool past weeping willows and shady still islands, and the sound of the rushing water gradually building. Into the pool, and I gave the boat its customary pirouette to show off to the newcomer the full spectacle of the weir. Then on to the sheltered nook for the bait fish.

My client wanted to fish for Thames Trout in a very traditional manner. He had read his Hobbs and Chalmers well. Although a bait mounted on a Thames flight was a most deadly—and oft used—killer, also effective was to trot a bait fish past a known lie, or a feature in a pool. And at this time of year the pike and perch, which of course are not averse to a tethered lunch (there is, indeed, no such thing as a free one), can be taken with a clear conscience.

So the float weebled around the deep drop off and, as the sun rose to fill the aromatic pool with sunshine, it bobbed, dipped and followed the diver down into the hidden depths. What a moment, always a moment, when a good perch rolls deep beneath the rod point for that first confirmatory glimpse! Don’t they always look so big? And when it is a good fish it’s always a thrilling, tense and tender hooked fight before the relief of the fish in the net. “Your fish, sir!” and the smiles widen…

Tea break, and on the Island the Kelly erupts its fire spout and the smoke filters through the sycamores to join the sun. A table and chairs, home made biscuits, and another pot of Assam… Can this be happening? Indeed it can, peeps the passing flash of blue!

We resume our joy in the eddying pool, and the conversation turns to the aromas of a weir. Evocative, individual, unmistakable… exciting, entrancing, and ours for the day! Joy indeed, and the waters tumble and the foam rafts wander and coalesce like galaxies in a sea of reverie. And then the float shoots under! This time it’s Mr Pike and, although only a youngster, makes good use of his youthful exuberance by displaying his ample abilities as a tail walking acrobat. A great little fish, so full of Life in the spray!

And so to Lunch. The Island rests us again, and the talk meanders between diverse subjects…salmon flies and shark boats, bream baits and laying on… away we roam to distant rivers and mighty quests. More tea, and a quest for a chub is determined upon.

We row quietly up past the willows and anchor broadside to the stream. Wallis is made redundant as the steady glide pulls all it needs from the reel. Down drifts the quill, but Mr Chub is elsewhere today. It has been a cool spring, and rumour has it that the honeymoon isn’t quite over.

At the back of the pool enters a clear, bright brook and, under the shady embrace of another island’s willows, the anchors are lowered and the dark confluence is explored. Bread wafts down the stream, the ducks investigate and talk turns to another day. Last casts and laid plans… the perfect end amidst smiles and satisfaction. A lazy, unhurried row down past the villa that gazes at this idyll always, and the tackle is stowed, the memories stored.

Handshakes of farewell this time, and assurances of a day well enjoyed. I watch the happy angler stride back across the meadow, now parched in the afternoon’s rude glare.

The little bay embraces the bows again. In the early morning light all was hushed, the bird song and my rustlings the only sound. But now the world is wide awake, indeed heading for another night, and amidst the noise of the toll bridge and the last of the gardeners (no one owns shears any more…) I remain quiet as I tidy away my day. This was a good day, it was Opening Day, and a happy angler is my satisfaction. And I hadn’t even wet a line… 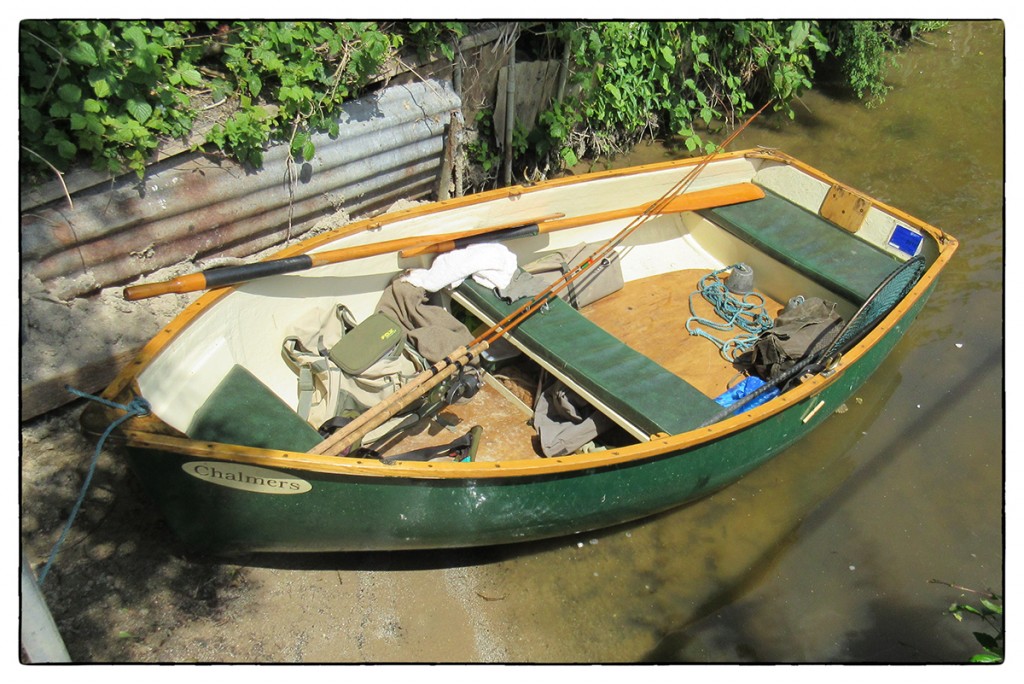 Steve Roberts runs River Days, a unique river guiding service for the angler who wishes to fish the Thames weirpools, as well as some deliciously private waters for coarse fish, trout and salmon. He can be contacted via steve.roberts@riverdays.co.uk or on 07917 243 263 – though he may well be at, on or in the river!