By Garrett Fallon on September 2, 2016 in BIG FISH, FALLON FISHES 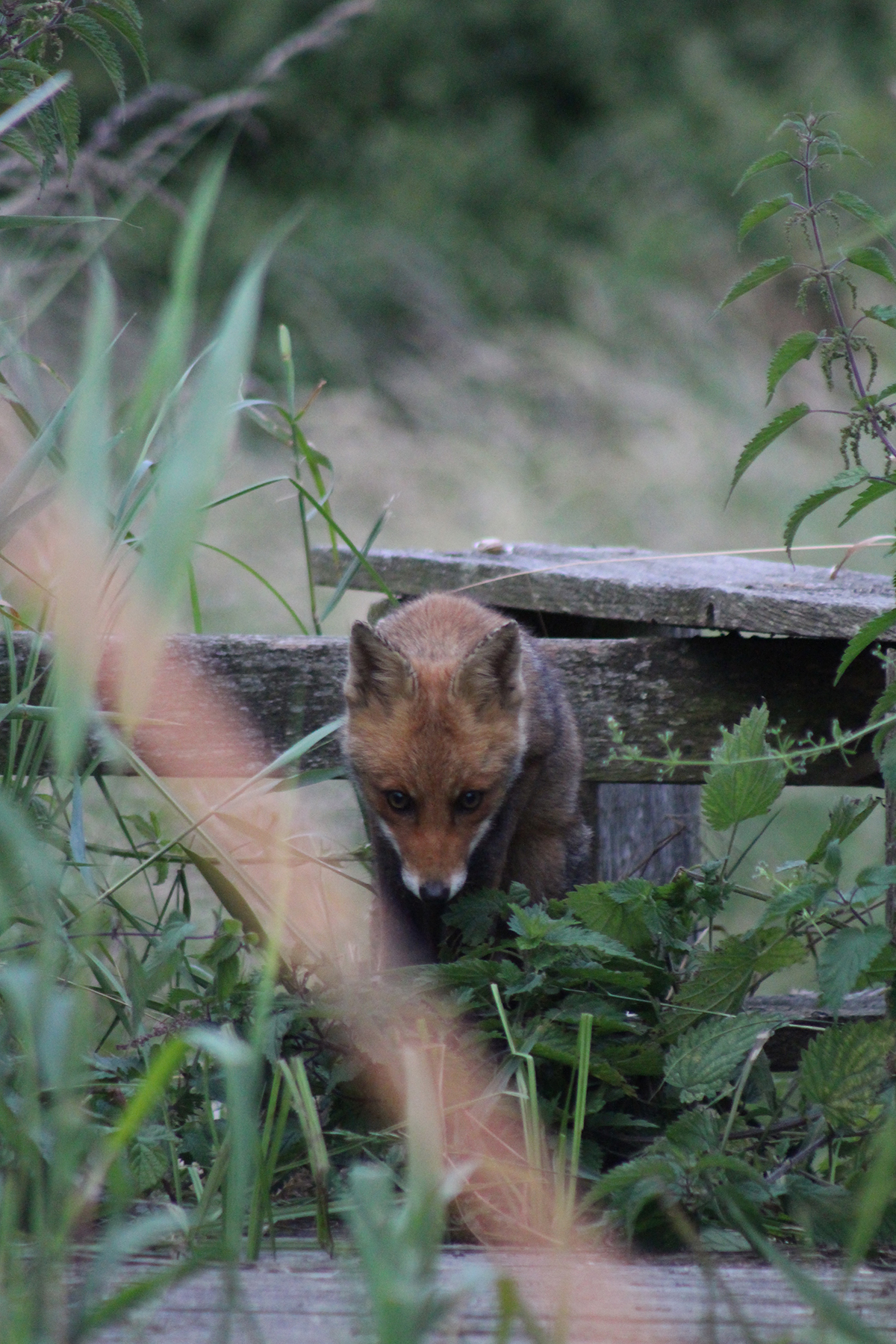 Standoff: a fox cub wished to use the bridge, or is he eyeing our bread?

“Bring your coarse fishing gear!” read the text message. Three hours later Rick arrived, caught late on that devourer of Bank Holiday time, the A21, with wife, three children and sizeable dog in tow. They were visiting our little coastal bolt hole for the afternoon. I myself was visiting it for the weekend so that I might actually see my family who had left London behind for what seemed like the whole summer while I toiled away in a sweaty office where the roaring heat outside had pushed the air conditioning into retirement and pushed the tempers of those working inside to the brink.

As unsatisfactory as the summer’s working conditions was the summer’s fishing, grasped only in fleeting moments, though some were admittedly memorable. Like Daddy Longlegs on the wind they teased as they fluttered then landed nearby, long enough for cupped hands to try and gather them in for a closer look. Sometimes I succeeded and a moment transformed into adventure, but most times I opened my hands to reveal nothing but the story of my life written on my palms.

I had given it as much thought as is possible when one is very busy thinking about fishing but not able to do it. I decided that I was so intent on making the most of what short occasions I had, that I was trying to cover all eventualities, and in actual fact was covering none. Instead of being a jack-of-all-trades (and master of none) I needed to focus on one discipline per trip, and prepare better for it. It made the initial decision harder, but every subsequent decision easier, like taking the plunge and sipping the first whiskey of the night when you know it will lead to at least a couple more.

So fishing off the beach pushed the little rudd-filled ditch at the back of the fields to the back of my mind. I had fished it several times since the young lad materialized out of the evening gloom last summer to tell me of the giant rudd that lived there. I had never seen them, had fished hard, caught dozens of tiny rudd, with ne’er a sign of anything bigger than half a sandwich, but all in snatched moments where my mind was somewhere else. No, it was the sea’s turn now. That morning saw me rise early to meet the tide shuffling inland, to lie on a shingle beach at dawn looking up at the tip of the rod against a mute sky that gradually coloured as the sun woke the spectrum from its sleep, and I hoped to heavens that a passing bass might drag that tip down hard towards the waves and drag my fishing into new territories. Instead I got a Lesser Weaver, the UK’s most poisonous fish, who seemed intent on making me pay for ruining its morning. Only for the fact I had encountered one with an experienced angler in Suffolk, I would have grabbed hold of it as sure as it was a small roach and then spent the next two hours feeling like somebody was driving a nail through my hand. Then I caught another. I should have brought my coarse fishing gear. That’s when I sent the text to Rick. 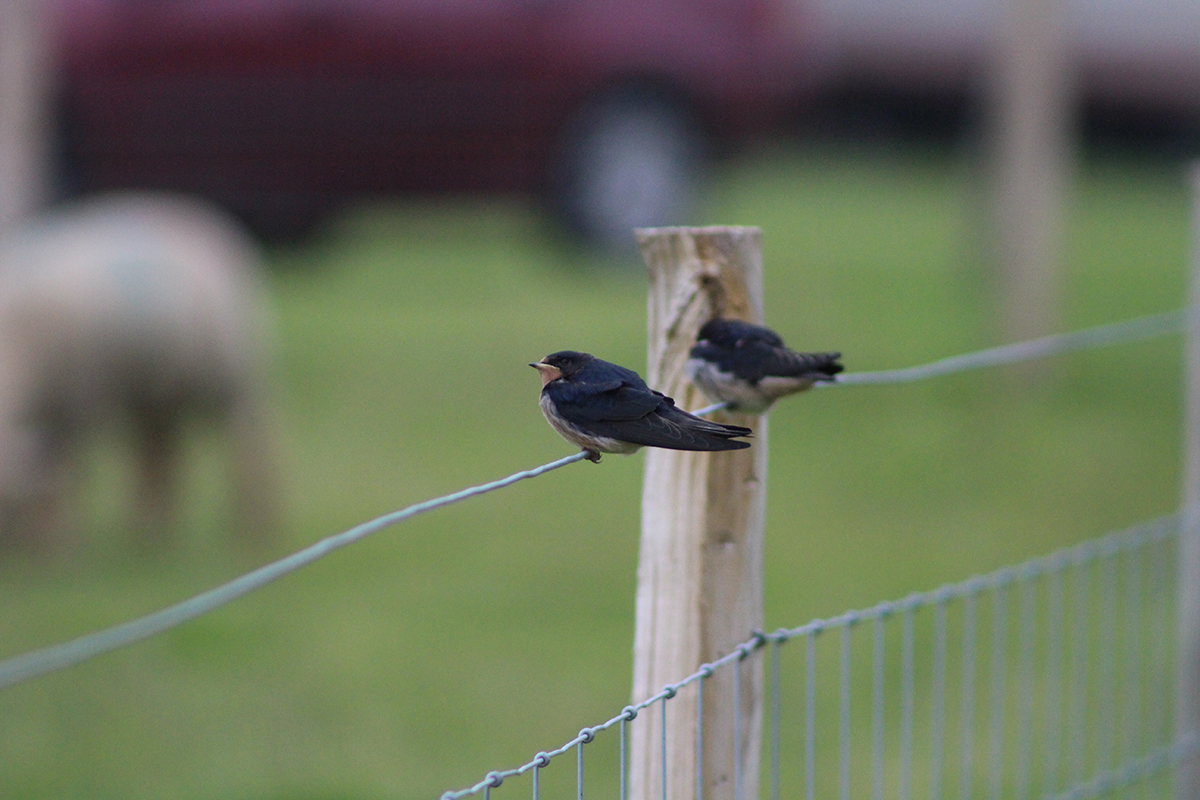 Fledgling swallows by the bolthole

Rick is a novice angler, having only ever caught a handful of fish, all small roach from a pond in South West London with me by his side. When I fish with him I am placed in a lofty position I am certainly not worthy of, but I’m not telling him that. We go through his fishing tackle: the new 11ft carbon fibre wand, light as a badminton racquet; the reel a shiny new contraption with more gears than my bike; the tackle box a multitude of bits and pieces purchased with enthusiasm without expertise, all bought for the price of a family meal at Pizza Hut. But crucially there was a float, some hooks-to-nylon, and some weights. We take my daughter and his youngest and head across the fields to the drain. It is full of small fish. Shooting fish in a barrel. It will be easy, surely. This is a wonderful place to let children experience nature. From the fledgling swallows to the fox cub that tried to cross the bridge we were standing on. There is much to open the eyes. 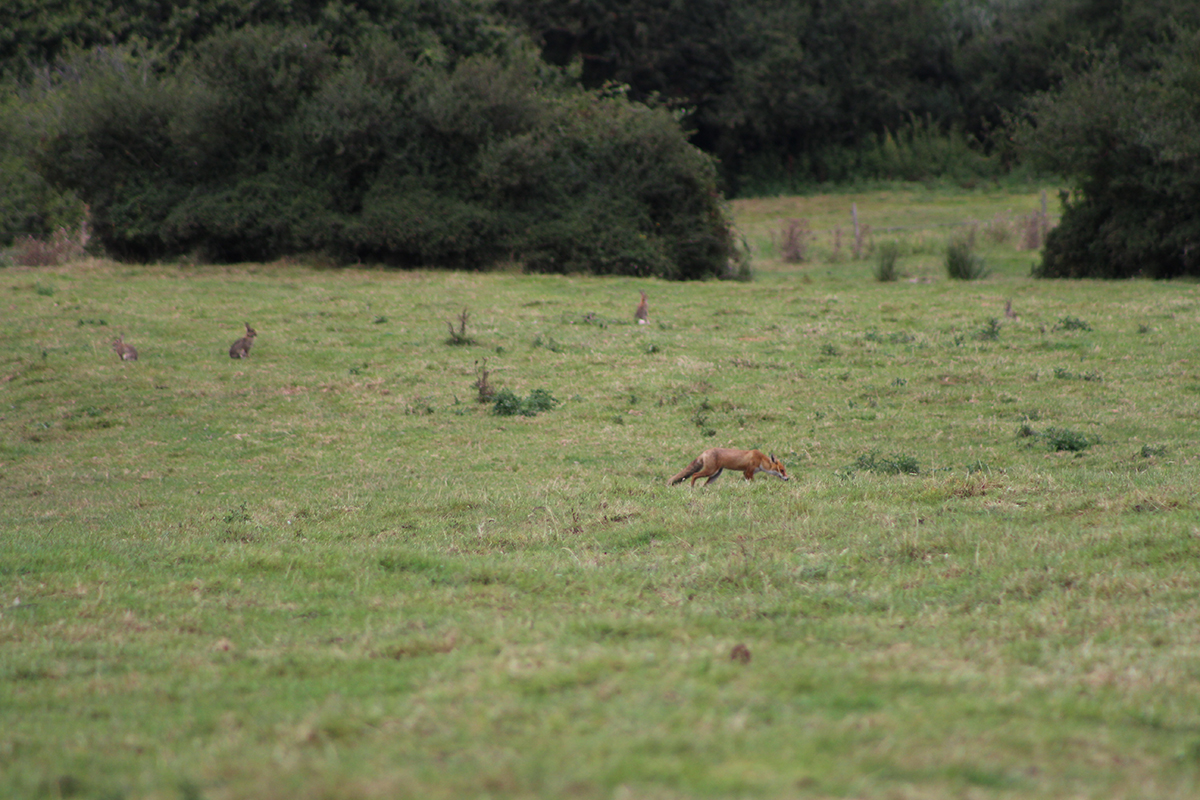 Hell, it is overgrown. The weed has really taken hold and the only way to fish is from the foot bridge above into clearer water on one side, but up this high the fish can surely see us and the cross wind makes the float and line want to dive for the reeds, which are tough and unforgiving, festooned as they are with the remnants of previous anglers failure. But we manage to flick the line where it is needed and feed tiny balls of white bread into the clear patches of water and immediately little rudd snatch at them. We are only fishing bread because that is all I have to hand. In a sense, there was no time for me to prepare badly, but it brings me back to my childhood when all I fished with was bread paste, made with flour and water, as it was cheap to make and less likely to get eaten by me. 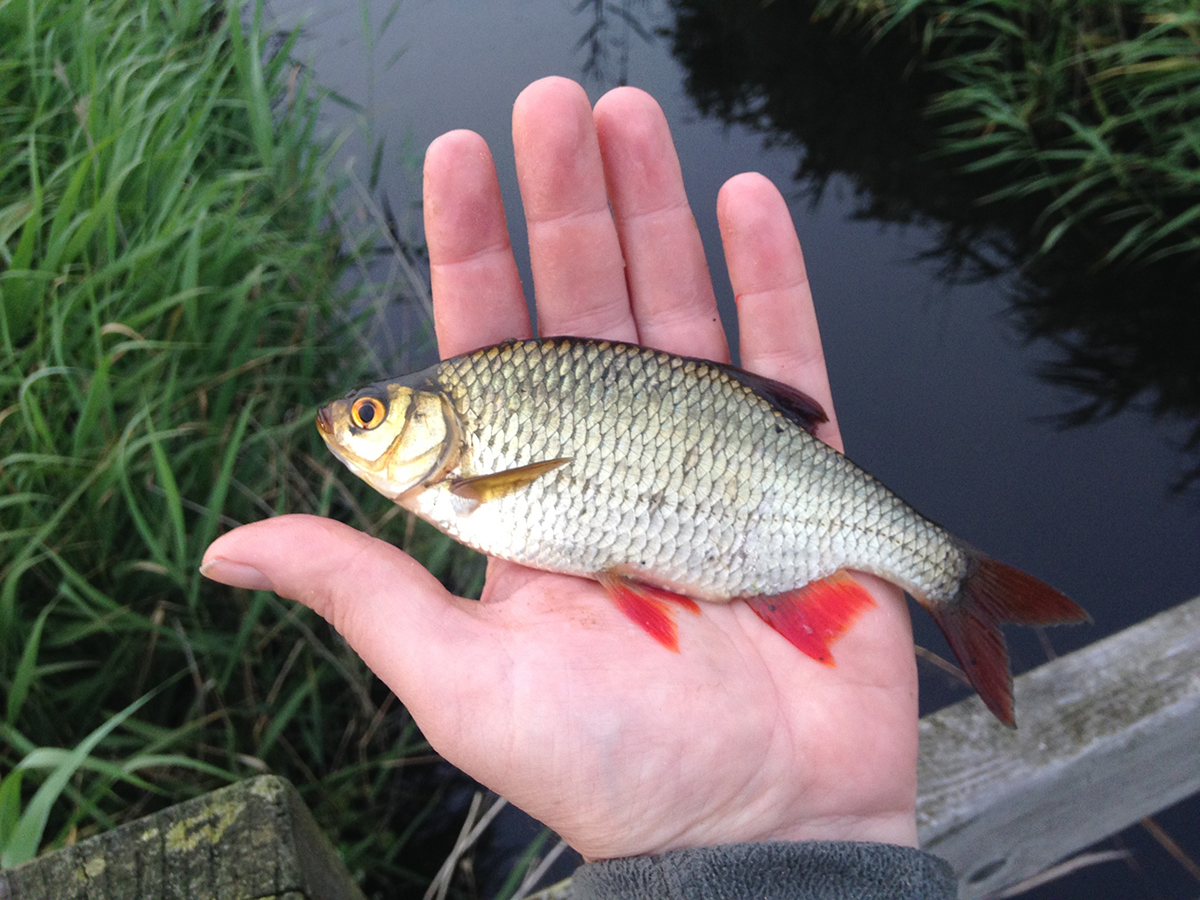 Ditch rudd: but where are your bigger brethren?

We watch the bread fly off in one direction or another, little fish too small and dark to make out against the bed of the ditch, swimming frantically for sanctuary and a moment to stuff their faces with pieces of food too big for their mouths. The float sinks immediately but we’re not connecting. With a little tinkering we play with the bait size until eventually the first little rudd comes to hand. The girls are enthralled. Rick is delighted. We pass the rod around, everybody has a go, a few more are caught. Then the swim dies down and we turn around to fish the other side of the bridge, the really weedy bit, the second side of the same coin. I throw some bread in and just for a moment think that my eyes have played a trick on me. The bait didn’t zoom off, but simply disappeared. Did I just see what I thought I saw? Then Rick lands his bait very close to the reeds, and all hell breaks loose.

The whole event lasts about 5 or 6 seconds. The float dips and Rick strikes, but the little fish doesn’t lift easily from the water, rather the rod tip is dragged down forcibly. Rick feels the power of the fish and pulls back, an enormous rudd breaks the surface, the hook loses its hold, and the biggest rudd I’ve seen in 25 years swims away. There was no in between small and big, no half measures in this ditch of rudd. No way to prepare Rick for what happened. It was either tiny, or massive. But crucially there is no sadness, nor regret. We just sit there laughing, two fathers with their daughters, all of us shaking our heads at what we have just seen.

A rain squall gives us a soaking and the children take refuge in a thicket. Rick turns to me and fills the space with momentous wisdom…

“That’s what makes fishing so bloody amazing. It’s not necessarily about what you catch, but what you don’t, and how the whole day tells its own story.”

Not bad for a beginner. Not bad at all.

Postscript: I fished the same area again this morning, and half-way across the fields I realized that I didn’t have a camera with me, and joked to myself that this greatly increased the likelihood that the fishing would be excellent.The extra weed growth of the past two months has indeed pushed the larger fish into a new swim. With bread under a home-made waggler, in a short session I caught a dozen fish up to just under a pound from a very tight swim. Nothing tiny, nothing huge, all in between. But you’ll just have to take my word for it. And I’ll go back soon, better prepared.