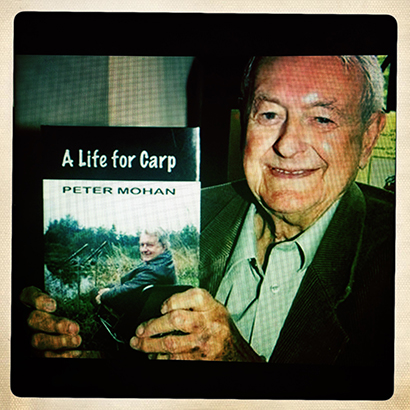 Angling, and carp fishing in particular, lost another advocate shortly before Christmas. Peter Mohan was born in Berkshire in 1930 before growing up on the Channel coast at Bogner Regis. He began fishing at the age of twelve, and, at a time when the species was deemed by many to be uncatchable, developed a special love for carp. He caught his first ever carp from Beechmere and a lifetime of obsession was born.

Having completed his National Service in the RAF and worked for three years as a gardener, Peter found his way into teaching – a career within which he remained within until 1970 when he decided to try his hand at writing. He was rather good at it.

Peter has written at least a dozen books, and along with instructional titles and memoir, he also turned his hand to angling based fiction – with possibly his most famous title Cypry the Carp, published in 1973.

As well as writing, Peter was a fine editor, and worked at Beekay Publishers for many years alongside magazine production and the promotion of carp fishing itself. Peter founded the British Carp Study Group in 1969 and the Carp Anglers Association in 1974 and was a force behind the first Carp Fishing Conferences and Shows. He has left quite a legacy.