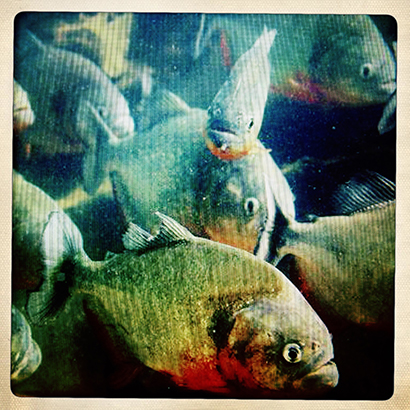 Ah, the late seventies…..a time when music was real, man….

The Sex Pistols were busting the establishment with Never Mind the Bollocks.., The Clash were fighting the law, and out of Brighton came The Piranhas – a ska band whose cover of Tom Hark had people shimmying around disco halls right across the country.

Despite their cheery, brass-edged sound, The Piranhas named themselves after one of the most feared fish that swims. The piranha. Obviously.

There are numerous types of piranha – fifty or more – and all are to be found in the waters of South and Central America. With a couple of vegetarian exceptions, the piranha is known as a voracious predator and scavenger. They are relatively small fish, often weighing less than a pound, but make up for their lack of size by shoaling in number.

The teeth of a piranha are razor sharp – designed to rip quickly into a food source. Much is made of the danger posed by piranhas to humans, and numerous attacks are reported every year. For the most part, though, they behave like typical small, shoaling fish. They are timid and easily spooked, but rather like a horde of hungry minnows, when a food item presents itself all fear is lost to the competitive drive to eat. They are a popular target for fishermen as a source of food – though wading is not recommended.