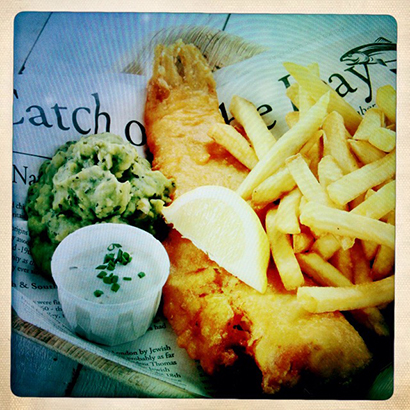 Fish and Chips. Yes please – lots of salt and vinegar, perhaps a pea fritter on the side and even though it is a dinner guaranteed to deliver Fishpool a major dose of indigestion, he or she simply cannot resist.

Aside from the tradition within the meal itself, there is also a lovely, and very British, trait in evidence above the Chippie door. We love a pun, and the Fish and Chip shop rarely fails to deliver. The ‘plaice’ is a little over-used, (‘Kay’s Plaice’; ‘Fallon’s Plaice’ – they’re ten a penny) but ‘Manchipster Plaice’ does at least take it a little further.

In Market Bosworth is the brilliant ‘Batter of Bosworth’, while in Goole you will find ‘Frying Nemo’. In Battersea is the ‘Battersea Cod’s Home’ while a particular favourite comes from South Wales – ‘A Fish called Rhondda’.

There’s ‘Hippie Chippie’ in Dartford, ‘The Cod Father’ in Manchester and London, and ‘Codrophenia’ in Sheffield.

The winner, though, in Fishpool’s mind at least, goes to Leeds – ‘Proper Battered’. Like it.