By Garrett Fallon on December 19, 2015 in FALLON FISHES 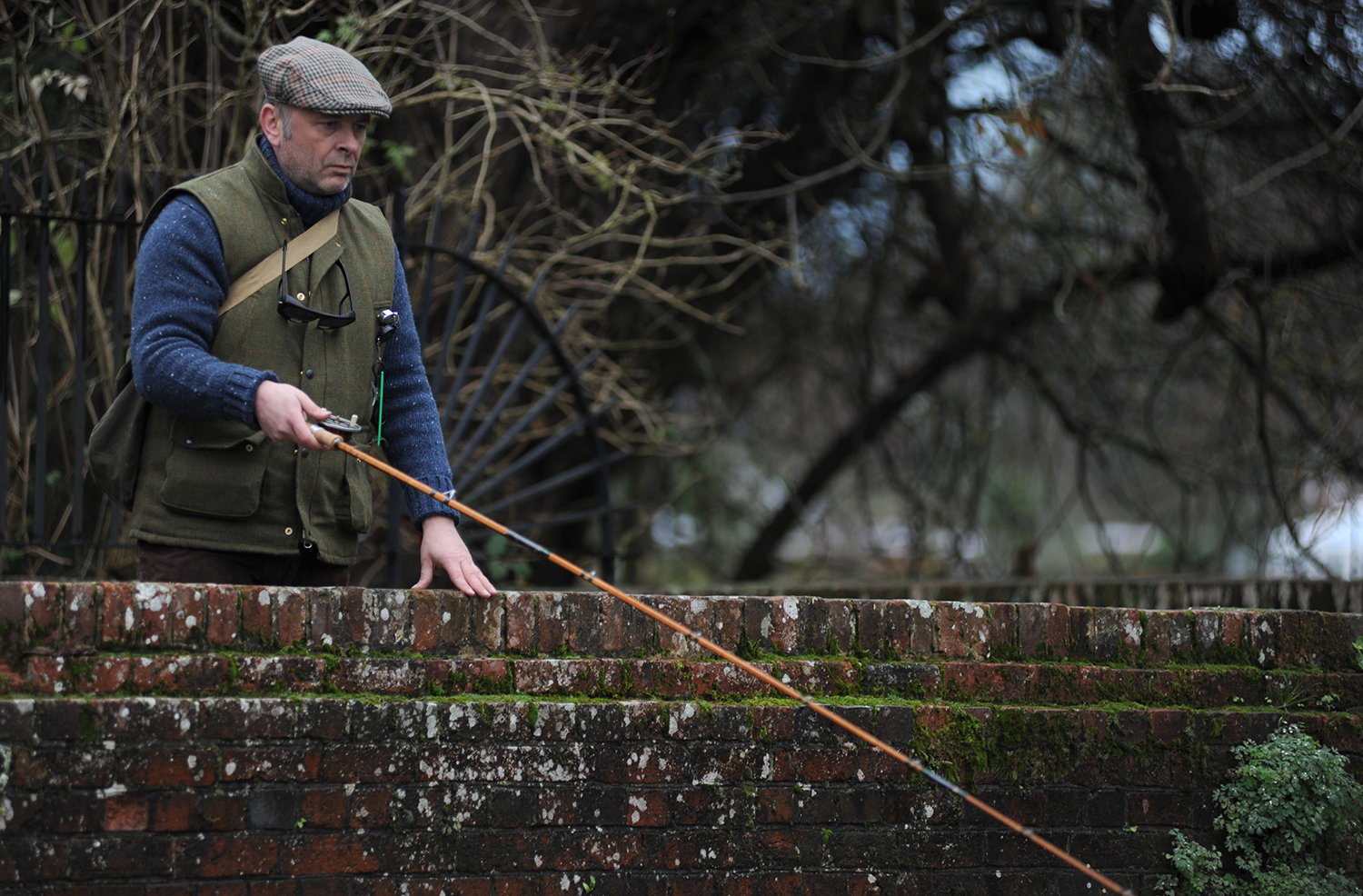 Off the wall: a picture of concentration

I was too young to shave and still at an age when I thought girls were pointless and as annoying as acne. But I followed him like a puppy, yapping at his heels in joy.

We approached the old stone bridge that crossed a little river not five minutes from my front door. It was an ancient, decrepit place, reeking of local history like an auld drunk in a bar. He showed me how to tie the line to the hook, attach the weight, impale the worm, where and how to cast and—most importantly—how to feel for bites with my fingers. With each tiny tug on the line my heart launched itself against my rib cage as if it was trying to burst from my chest.

“Strike!” he shouts. I hoik the rod and the worm flies from the water towards my head and into the Hawthorn behind me..

The heart races again. I hear only it and the river, then his breathing as he turns his head closer to my ear and whispers…

It is a short but pointless fight for the fish; a brash, thrashing lump of sandpaper with spikes that bloody my hand and a mouth that looks like a gateway to Valhalla. How mighty it looks, more dragon than fish. Evolution was having fun when it created the perch.

That little river flowed into a bigger river and perch could be caught throughout easily enough on stout old rods and heavy tackle—the type that lie forgotten in sheds until young children discover them, and if broken, cause no great loss to anybody except the child in all of us. The finesse of the experienced angler was for later in life. We used whatever fishing line was to hand; nuts and bolts instead of split shot—crude but effective—and pilfered hooks from wherever we could find them; a brother’s tackle box, a father’s fly tying kit. The perch formed the cornerstone of our youthful angling adventures, each trip preceded by back-breaking digging in manure heaps for bait, four lads heading for the river stinking of horse-shit, probing the riverbed with do-it-yourself terminal tackle and our determination to ignore the wider world outside our bubble. Girls could wait, but perch could not.

We never used landing nets as the fish were never big, and we rarely caught trout on the same tackle, most probably because we were too clumsy, jumping around the riverbank like young otters, as much frolicking in and out of the water as fishing in it, but we occasionally caught eels and gudgeon, and always fought off the unwanted attentions of a multitude of minnows. Live baiting wasn’t allowed in Ireland—one of the few laws we didn’t break—so the minnow was free to attack a ‘wurrum’ in the knowledge that if caught, it wouldn’t end up as bait for a perch. But a perch was often taken by a pike before we had the chance to land it. The circle of life indeed.

But we never caught big perch. I think the biggest was about a pound, and I killed it as it had swallowed the hook, as perch are prone to do if given half the chance. I was so distraught that I brought it home and fried it in butter with a little garlic, even though I didn’t like eating fish (and still don’t). I didn’t want its life to be pointless. I was about 11 years old, and there I was filleting and consuming a fish that I’d caught myself, just like Huckleberry Finn. I remember it was bony, but tasty. My mother came into the kitchen asking about the smell. I thought I was sure to get a telling off. But it wasn’t a big perch.

Some days were halcyon. Young David beat me 45 fish to 33, when we stumbled on a voracious shoal of small perch at the point where the little river joined the big river. I was thoroughly thrashed, and removed myself to sulk with all the dignity of a spoilt brat. Once we watched perch corral a swarm of minnows beneath a weir, and the bigger perch thrashed out of the water after their prey, the minnows taking to the air like whitebait escaping bass. With the rods at home we simply gazed in awe. But despite the horror they were wreaking on those minnows, there were still no monsters.

David’s father Tony took an interest in our adventures. He was uncommonly tall, always elegant with his well-tailored suits and his trilby hat, a Sweet Afton nestled comfortably between his fingers and ribbons of smoke gently encircling his gaunt features like mist on a limestone cliff.

“Perch you’re aaafter, is it?” he asked in his soft educated accent, hiding most of his rural upbringing behind the façade of the only Morris Minor dealer in the whole county. He often tilted his head upwards as he ended his sentences, accentuating his ‘A’s’ and elongating them, and the words got whisked away on the breeze.

“Why, I caught a 6lb perch when I was a laaaaad. It was sooo big that we drove it to the butcher’s shop in Kinnegaaaad to have it weighed.”

It was the first time we even considered that perch could grow much bigger than we had seen, but I’m not sure we fully believed him. Then we discovered a 3lb perch, dead and decomposing under the same old stone bridge that traversed our little river. Where on earth had it come from? I never saw another even close to that size until years later and a summer’s tench fishing on a canal in Westmeath, and our frequent glimpses of a four pounder. It would appear out of nowhere like a ghost, then vanish as we rubbed our eyes in disbelief. It was uncatchable, to us at least, and taunted and haunted in equal measure.

I forgot about the perch as tench and bream drew my attention elsewhere, and I only refocused last year when I fished with Will Barnard, who generously put up with my obvious failings as an angler. I had a well-recorded battle with my own inadequacies that left me familiarly fishless, and so resolved to fish better in the future. I even visited a secret lake where big perch were promised, only to arrive to a scene of polluted devastation as dead and dying fish littered the water’s edge, and my long drive home made me think I was cursed.

I am thinking about all of these things as I drive down the M3 from London to Romsey. I am heading for the River Test at the kind invitation of an old friend from my football-playing days, Oliver Johnson. I am hoping to try his beautiful new Clearwater floats, and compare them to some handmade floats I was gifted by a kind friend, but we are also researching a feature for the magazine about big dace, and this man’s lifelong connection to this river. At Fleet Services I get a text saying there were some big perch about. By the time I collect Nick our photographer from Winchester train station, I am seeing stripes. 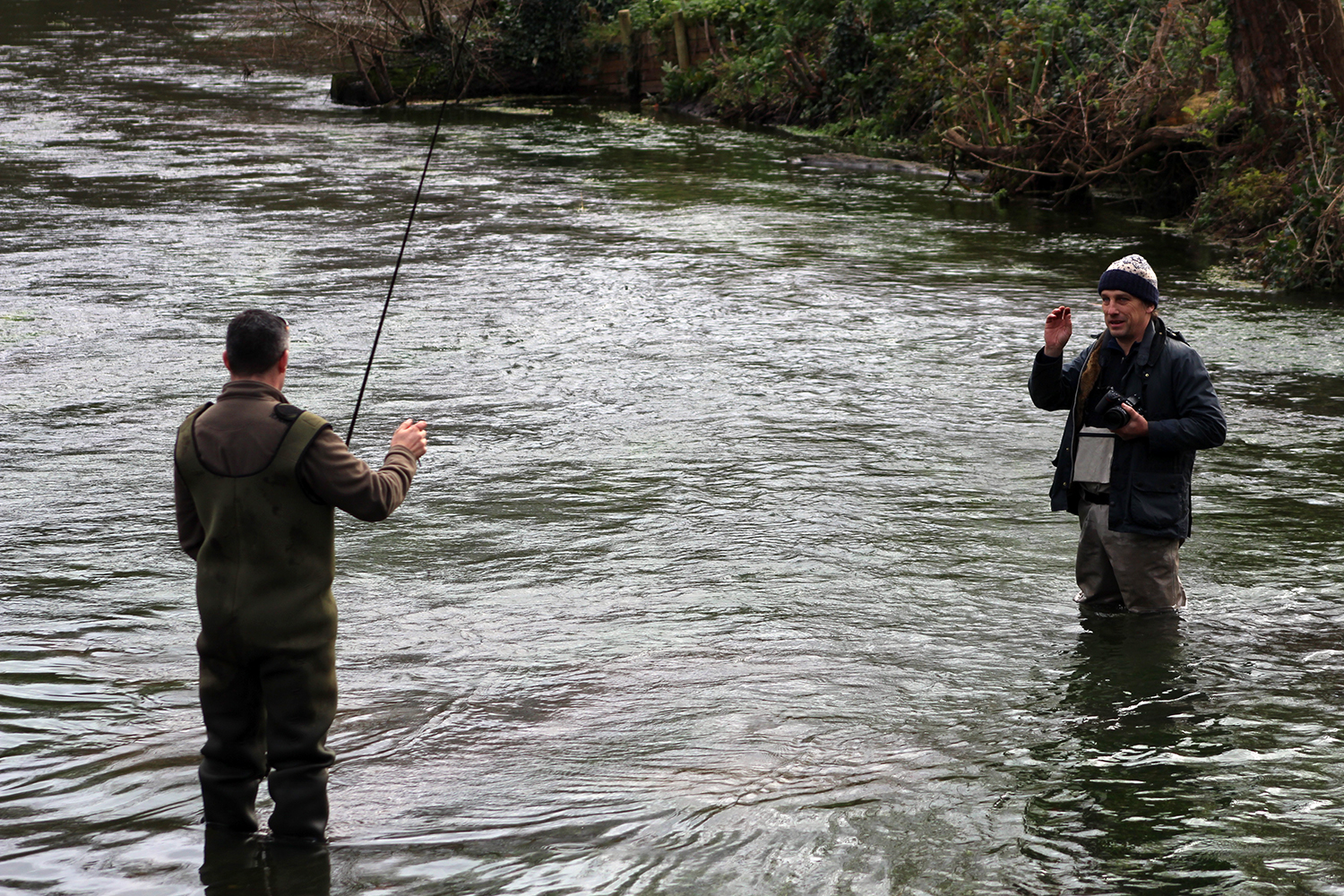 Messing about in the river: Nick and Oliver chase the perfect shot

The river is magical. I feed a constant trickle of maggots under the rod tip and into a pool where the river flows out from under an old mill. We are boys at play, fishing straight down the wall into the water below, watching our floats bobbing hither and thither, absorbed.

Nick and Ollie venture downstream and into the river to take some shots. I get a finer view of Ollie’s skill in maneuvering his floats exactly where he wants them, but I need to concentrate on my swim.

There is clear riverbed where the strong flow prevents weed from taking hold, forming a tantalizing pool, before the river starts to shallow. I catch grayling after grayling almost straight away. The float bobs around erratically, then almost always at exactly the same spot in the swim it disappears. What is strange is this tiny ‘hotspot’ relocates randomly around the swim—perhaps in response to the subtle changes in the flow of water—but as soon as one hotspot stops working, I search the rest of the pool until I find the next. I experiment with the depth at which I’m setting the float, add extra shot, try cocktails of bait (almost always three red are more effective), and eventually I find what works. I am reminded of my early days fishing friendly matches in Ireland, always thinking, ringing the changes. But these hotspots never occur outside an area of a few square yards. I am spellbound. 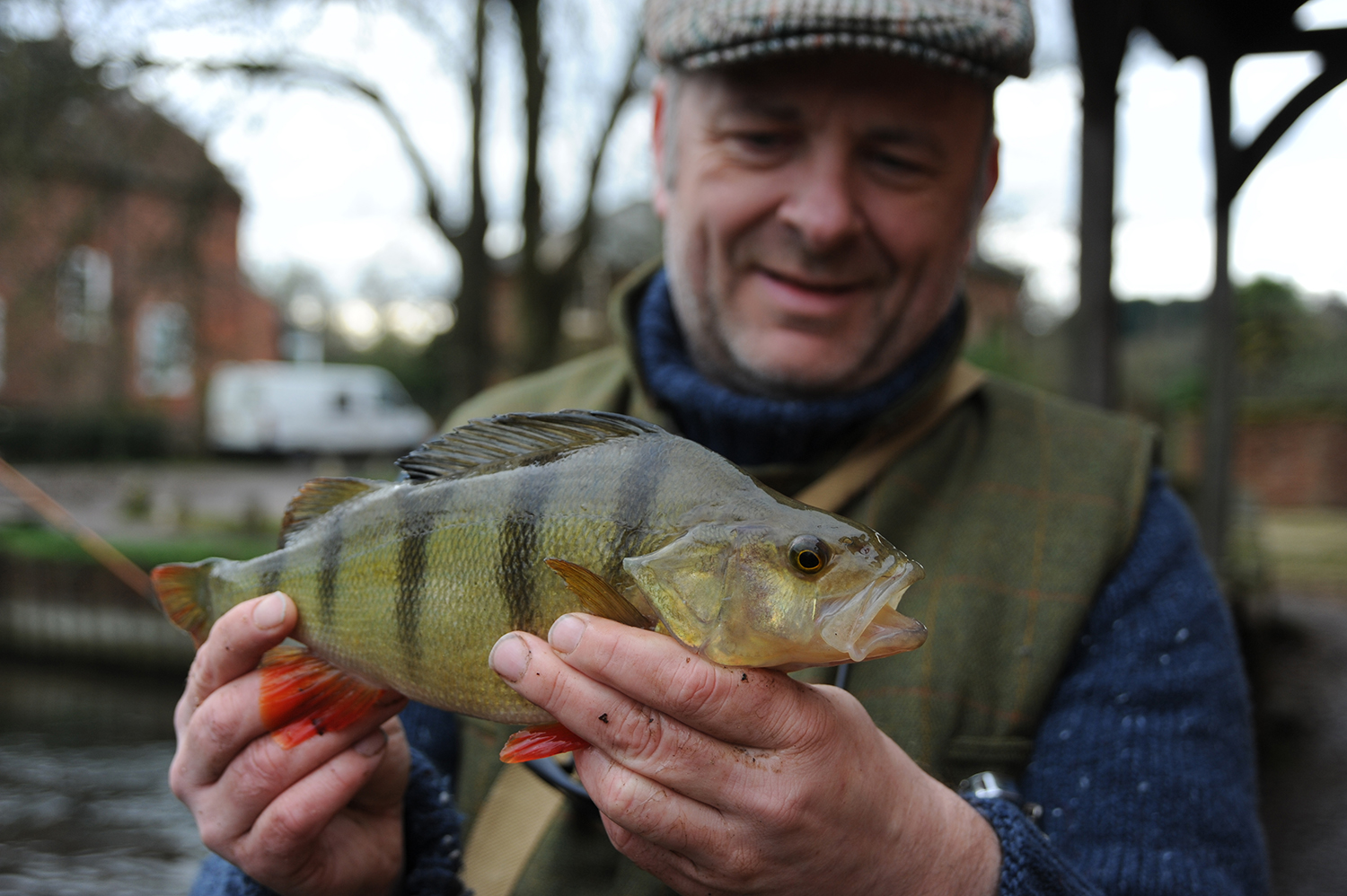 Not bad: and sure to get bigger

The grayling keep on coming so I switch to worm. Still no perch. I switch back to maggots then I catch a perch of about a pound and a half, and am ecstatic. It’s not the size that matters, but the fact that it looked ‘big’, if you’ll excuse the term. It is at that stage of growth where its shoulders rise steeply from directly behind its head, and the belly starts protruding underneath like that of an over-watered publican. It’s green like Irish grass, with dark stripes running down its side and bright red fins like wings of fire, and its belly is the colour of butter. That is good enough for me. 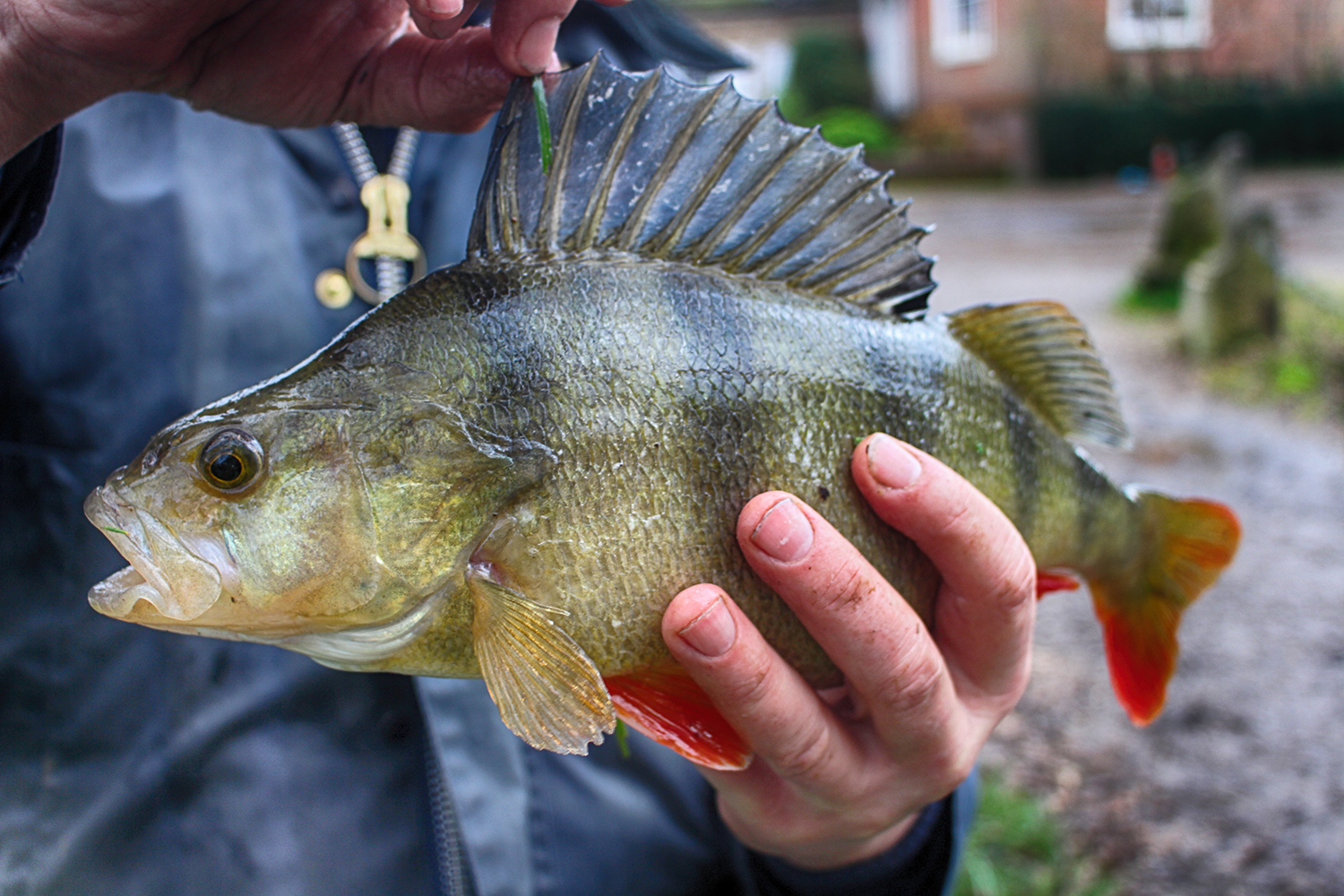 Best of the day: Nick’s perch of 2lbs 2oz

I have just landed another beautiful grayling when my companions return from their mid-river sojourn. I offer Nick the swim and straight away his float slides under and we suddenly see the unmistakable stripes of a decent perch. There is a fine bend in the rod and the perch tries to swim upstream under the mill, directly under our feet, but Nick has everything under control. I am at the net so I’d better not fuck it up, and I don’t. At 2lbs 2oz it is no monster, but what a beauty. It is the biggest live perch I have ever seen, and despite not falling to my own rod, it is the fish that I have come for. The Guinness will taste good this evening.

I am a born-again river angler having spent too long sitting silently beside canals, ponds and lakes, and though I will always adore the lily-lined loveliness of the stillwater, picking my way through the subtle creases of flowing water is what excites me right now. Where in youth I bumped a bait along the bottom, or weighed it down with parts of machines, I now use the flow of water to do my searching for me under the magic carpet that is the trotted float, taking me to parts of the river I couldn’t normally reach. I am no longer reading the braile of my youth, but am seeing through opened eyes. After all, it is the perch, more than any fish, that takes me home.

Good times for Crooked lines
The oldest of fish