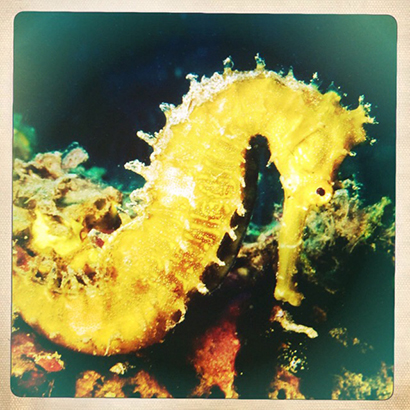 One of the most extraordinary creatures in our Oceans, there are over fifty species of seahorse on the world, though only two are found in British waters.

The Spiny Seahorse (Hippocampus Guttulatus) and the Short Snouted Seahorse (Hippocampus Hippocampus) are found in small numbers around our coasts, predominantly off western and southern shores. Despite their appearance, seahorses are true fish, though they lack caudal fins. Their upright stance in the water, with a down turned head and snout, and long curved prehensile tail, give the impression of something otherworldly. They feed on small crustaceans such as shrimp, and have eyes that can move (and see) independently of one another.

Throughout the world, the Hippocampus family is threatened. Seahorses are taken in huge number for use in Chinese medicine and are also taken as curios—often being left alive in the sun to dry (and die).

Sadly, the pet trade also takes a huge amount, with a huge percentage dying before they even reach the shops.

We can’t catch them as anglers, and nor, perhaps, would we want to—but we can be aware of a truly amazing creature.