“It has long been an axiom of mine that the little things are infinitely the most important.” 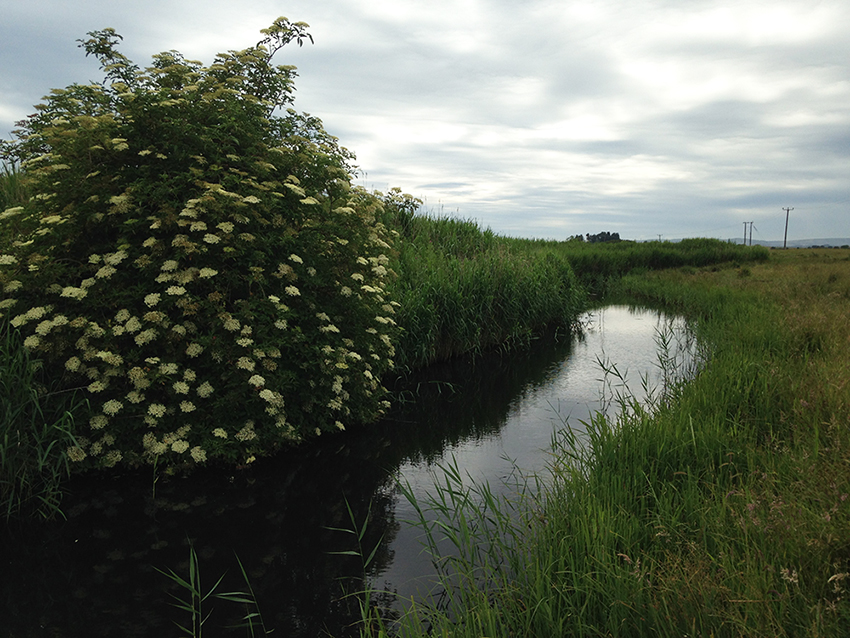 Actress and bishop jokes aside, it is healthy to occasionally ignore the brutish force of the colossal for the intimate pleasure of the small. As as with the best of liaisons, it pays to spend time together, get to know one another better, and understand the kinks and quirks that make the connection special.

During the close season—which I observe even on stillwaters—my fishing was largely on hold with the exception of some minor flirtations with the sea where my amateurish fumbling was slapped away by the uncooperative English channel, as well as some fruitless pursuit of trout on a large London reservoir. It was frustrating. To add to this, quite unexpectedly, my head had been turned by a charming little drain, really no more than a ditch, in East Sussex. We have the use of a 1970s static caravan, and while exploring the surrounding fields I found the water by almost falling in. It was ripe with potential, but I had to wait patiently for the glorious 16th before I could put down my beachcaster and pick up the Wallis Avon that had been waiting patiently for some attention.

When not following the tides while facing a distant France, I’d change paths between the shingle beach and the one that hugged the river’s edge, and explore the forbidden waterway on foot, leaving the rod at home, allowed to look but not touch, a voyeur under a window. It snaked silently behind the camaraderie and back-slapping of an exclusive golf-course, within earshot of the forceful tide that raged behind the high shingle bank just beyond, which protected the low-lying grassland from flooding, and created this very water where once there was no more than marsh. On one such day, having just photographed some old groynes that were half-submerged in the shifting shingle, I encountered groins of a different kind, 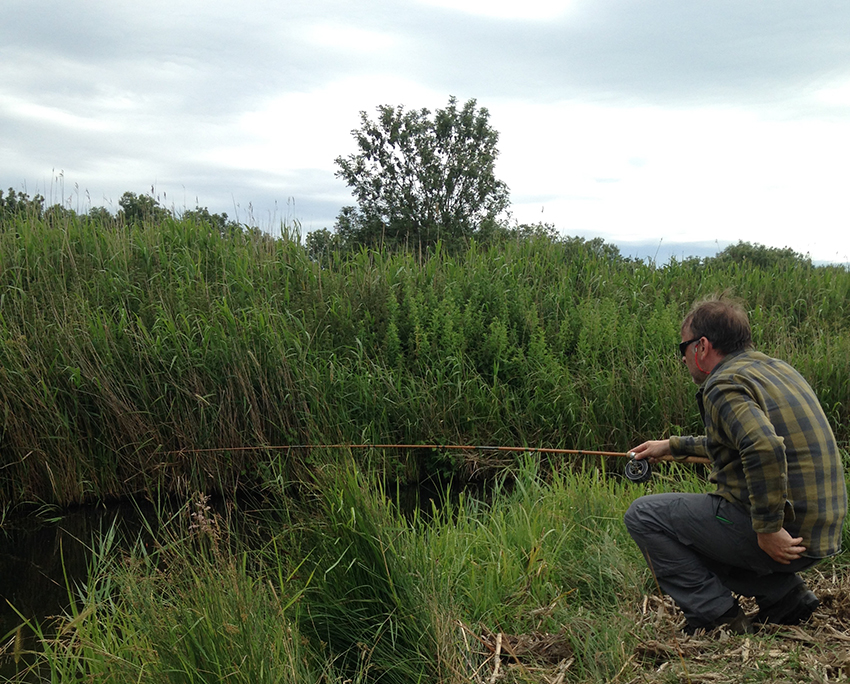 as I disturbed two corpulent nudists. I prefer nature to naturists.

The water was enchanting, quickly blossoming into a beautiful reed-lined channel as other ditches fed and nourished it on its short journey, hidden away, sneaking furtively behind a world that knew little of it, except for the sheep that drank from it, the farmers whose land it ran through, and the golfers whose balls were errant. If I had been distracted before, I was now bewitched.

The 16th was long passed by the time I had the opportunity to fish it, and I was excited. I passed through the broadleaf wood, beech soared while oak trees gnarled their way to the sky, and hawthorn snatched at my sleeves; the pockmarks of badgers scarred the ground as next year’s bluebell bulbs were uprooted, and the reek of fox piss stung the nose. I crossed a meadow and followed the water as it skirted the fairways and greens until I arrived at a wider stretch. A heron was there before me—a good sign. Straight away I could see the dashing of small fish.

Many fine writers have had their say on this subject recently: Stuart Harris in Fishin’ in the rivers of life, (Fallon’s Angler issue 3) and Jeff Hatt in Lords of the Piscine Punyverse (idlersquest.blogspot.co.uk) to name but two on this side of the Atlantic, while New York-based angling writer ron P Swegman’s Small Fry: the Lure of the Little illustrates perfectly that the American angler can appreciate the titillation of the tiny. In an angling world where we are bombarded by big fish, it is fulfilling to change tack and fish not for bigger targets, but smaller ones.

However, nobody fishes for smaller fish better than the 10-inch, action-packed plastic figurine, The General, a new addition to the angling blogosphere. For a man in miniature, every fish is enormous, and indeed, this is the point. It is Full Metal Jacket’s Gunnery Sergeant Hartman meeting Action Man, but with a rod in his hand instead of a plastic gun, and he forcefully displays his wonderfully tongue-in-cheek attitude to the little is his excellent blog http://www.fishing-with-the-general.blogspot.co.uk/, an antidote to the preoccupation with weight if ever there was one:

“The drain itself was only five yards wide and as tangled as a farmer’s mind.

For some two hours I walked along, staring intently into the water but seeing nothing. Just as I began to suspect that I was chasing a lie, there was a shiver of life in the water. What I had guessed was a large, sunken log began to swim along the bottom. Tracking it along the ditch, I hooked a small suckling pig onto snap tackle and waited. “

The pike ate the pig at the first time of asking. I could see it was thin and probably starving hungry. After a couple of vicious runs and a shake of the head, it was mine. A good looking jack pike of forty-eight pounds, but nowhere near the fish I was hoping for.”

Of course, chasing 50lb roach and 100lb pike is easy for an action figure, but back in the real world their tiny siblings were keeping me occupied. 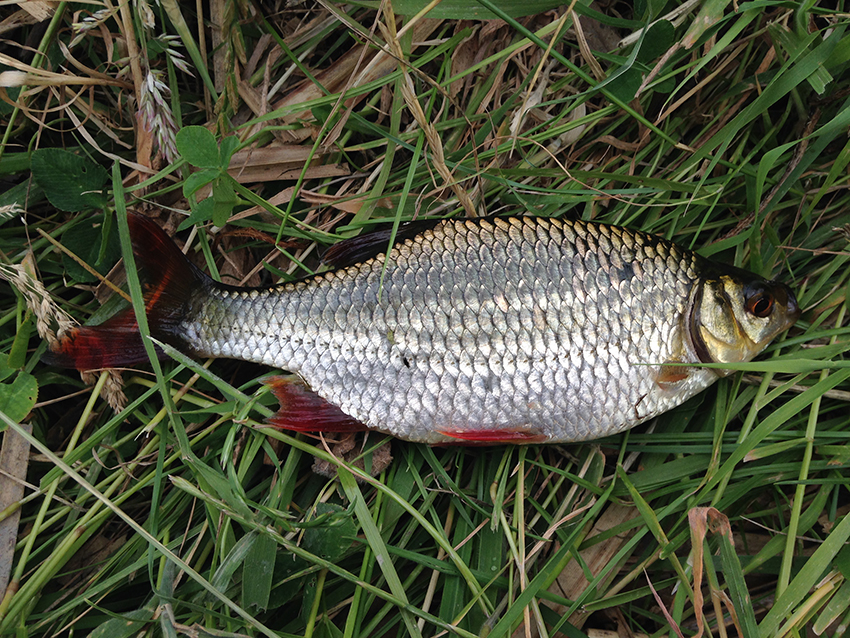 Using the lightest float I had—a handmade Minter beauty—and fishing up in the water, I caught immediately, a flurry of maggots all that was needed. First there was rudd; tiny, golden, perfect, then bigger rudd on the edges—perhaps even with a blend of roach—staying away from the main threat but still intrigued enough by the occasion to remain catchable from the fringes. Barely would the bait land before it was snaffled. My action was in demand, I was the boy all the girls wanted to dance with. I caught fish after fish—nothing over four ounces—and became wholly focused on flicking my tiny float to sit tight against the far margin as the shoal became wiser to my moves. A year before I would have fished with a modern fixed spool, not the ancient Alcocks Aerial that was spinning beautifully, a moment to keep in a throwaway society, new life breathing from a forgotten object in a lost world.

I noticed some weed floating up to the surface, often the sign of bottom feeders—occasionally tench or the bigger carp—but the lack of bubbles made me think ‘eel’, and indeed I had recently caught two in similar circumstances. I pressed on a bigger weight, enough to sink the float, and guessed the depth, then cast to measure it, but neglected to remove the bait first. I was about six inches overdepth, but still saw the float sail away before I struck. In the clear water I could see the brash stripes of a small perch dancing away. Glorious. Three more came before it was time to pack up. I was short on time, which was a shame, but sometimes it’s better not to ruin the moment by outstaying your welcome. 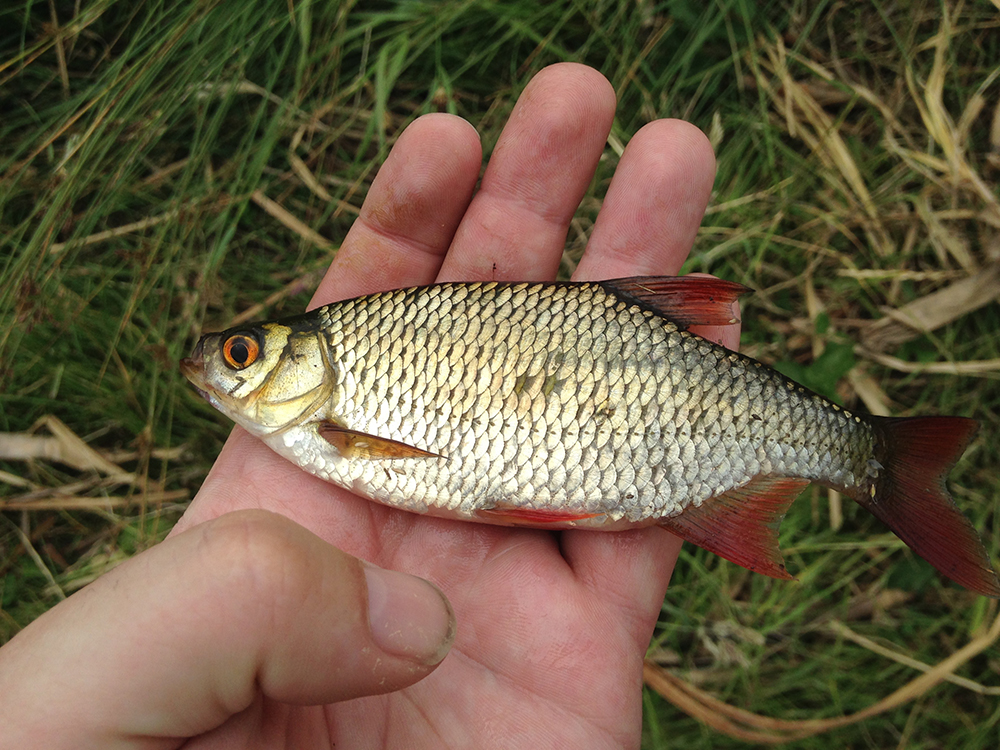 I joyously skipped back to the caravan, the raucous cawing of a murder of crows the only accompaniment. Normally sinister, their boisterous chorus seemed almost congratulatory. I have been without a ‘home’ water for so many years, that I had forgotten what it felt like to become intimate again. Having the time and opportunity to nurture the relationship with any water makes the experience so much more fulfilling, so I shall be back soon. That the venue is so idiosyncratic, makes it more than water; it is a muse, inspiring contentment and excitement in equal measure. The lure of the little indeed.