By Garrett Fallon on July 21, 2017 in ABOUT THE MAGAZINE, BIG FISH, FALLON FISHES 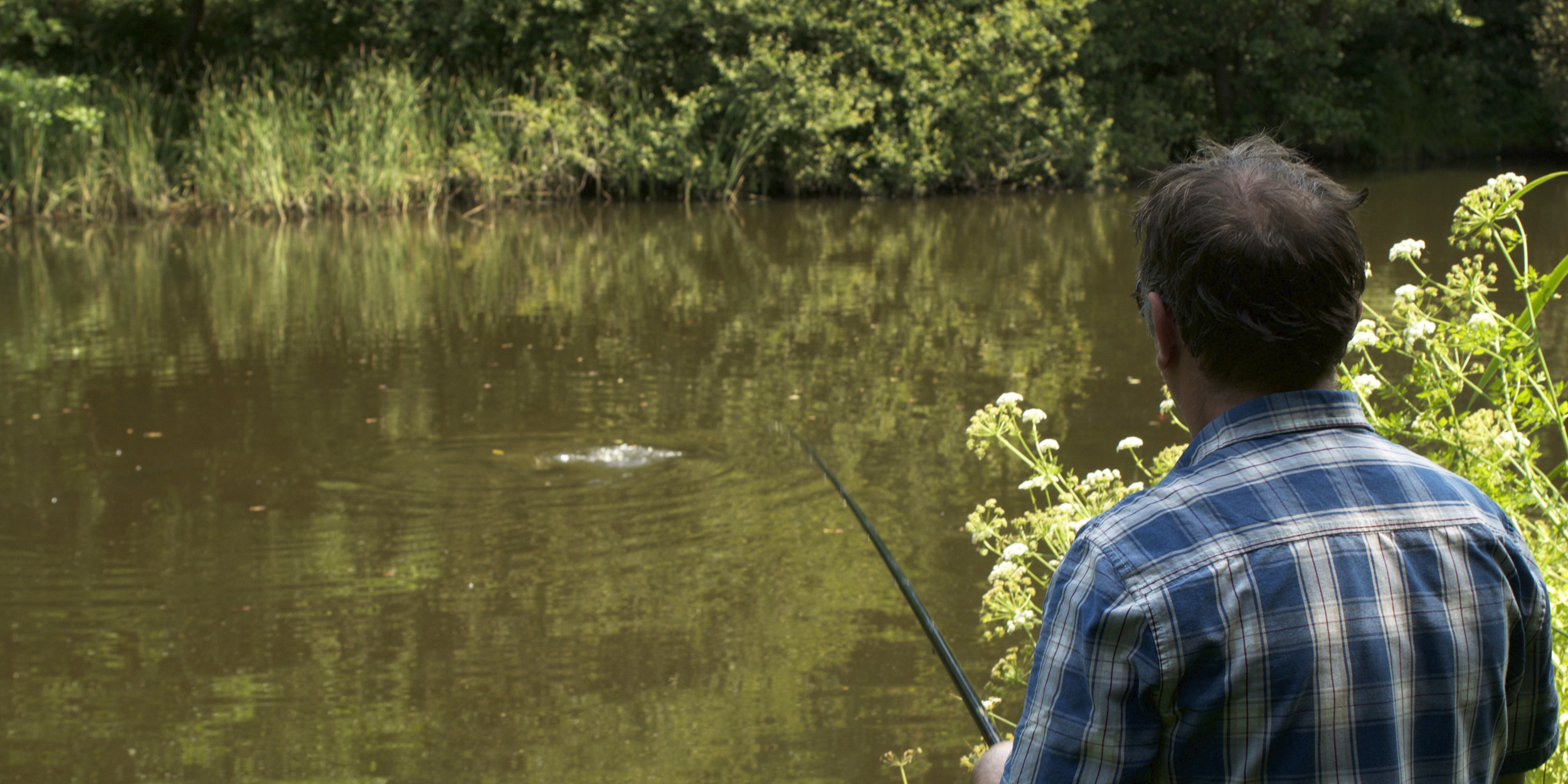 I’m not a sun worshipper, not with my delicate Irish skin. I crisp like burnt potatoes, dry out rapidly like a jellyfish stranded on a beach. I find myself wishing for any of the many types of rain we have back home, hitting my skin and exploding into little balls of steam. Still, once the sun is securely in the sky, it’s time to surface fish for carp, as much a sign of summer as beach towels and sticks of rock, red bellies and speedos covering middle-aged spread.

If these things sound slightly retro, then it’s fitting that my first foray of the year for surface carp was with a rod from the 1980s, astutely recommended to me by that purveyor of angling history, John Andrews. The Daiwa Tornado, 13ft of 30-year-old carbon was married to a Mitchell Match reel I bought 10 years ago from my off-the-wall driving instructor, who we shall, for the sake of the story, call Steve. It was—Steve would remind me often–very much like his significantly younger wife; in mint condition.

And so a recent Friday morning found me driving towards the coast south of London and into Sussex, but not for the beaches. Instead I turned into a narrow farm track and to some private, ancient mill ponds I have got to know over the past two years. Dominic Garnett joined me for the day, intent on showing me how much carp like a well-presented fly. It was another scorching day, volcanic in its heat, and the couple of cold beers we brought didn’t remain unopened for long. I guess fishing is like airports… (it’s pub opening time somewhere in the world) so one can indulge in a tipple no matter the time. 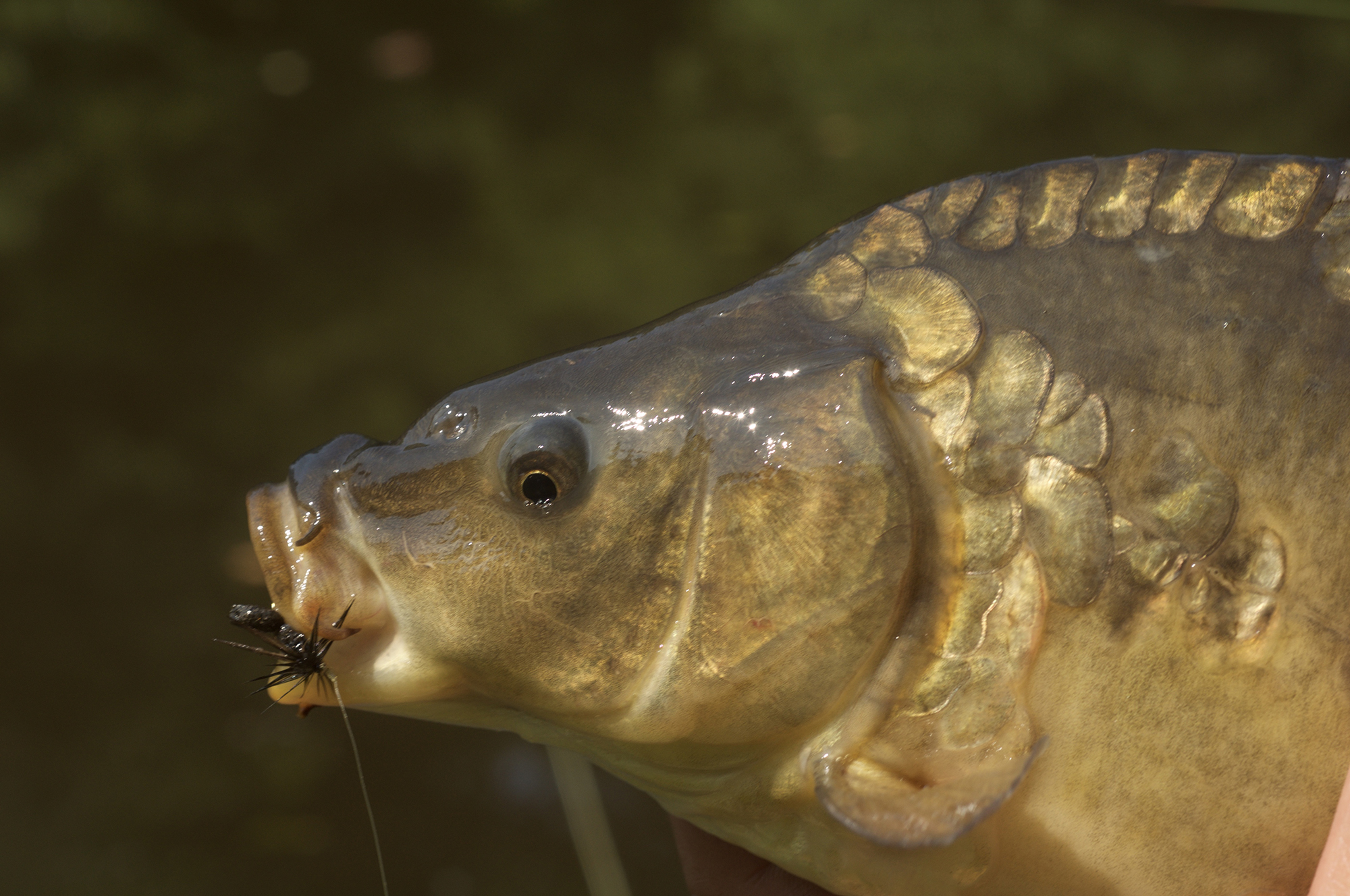 We began by walking the three lakes and spying for the large rudd which occasionally show themselves. In my experience, rudd like hot days. I chased them every summer on the canal at home and trust them as a quarry. I know where I am with a rudd. And like the sun worshipers who line the beaches like toasted sandwiches—their bodies of cheese melting and dripping over the sides of their towels—the rudd frolic freely in the heat, where other fish hide their lack of eyelids from the burning sun, The lakes looked healthy but quiet, as if it was taking the chance to snooze as temperatures rose. A sea of lilies offered shade and cover to small fish as they darted playfully in and out of open water. A family of coots—the parents and four chicks—were emboldened by the abundance and were making their way across the lily pads, there was a large splash, a sudden commotion, and four had become three to a marauding pike. It was Amity Island beach, Jaws preying on lilo-loving swimmers, and I am police commissioner Martin Brody watching helplessly. Nature has no room for the cute. It’s simply a meal for something. 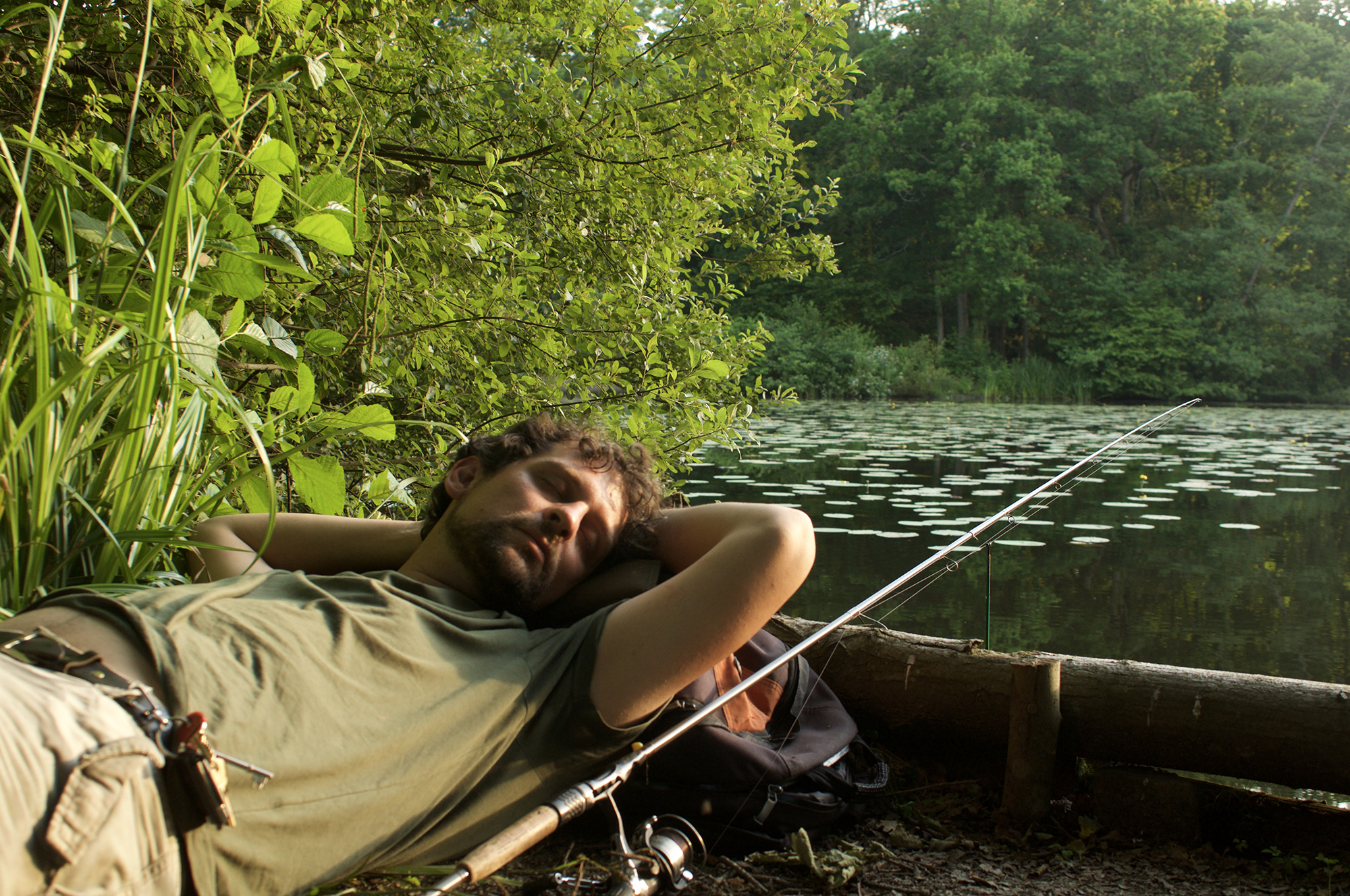 The two larger lakes had rudd aplenty in the margins and Dominic treated me to some skilful flicking of flies into the tiniest areas, often simply catapulting the fly into the margins where it was met enthusiastically. Little rudd like little flies, spider patterns I believe. But there were no signs of the bigger fish. It seems that, after all, I might not know rudd as closely as I thought. Long-distance relationships and all that. To catch anything bigger we needed to move to the smallest lake where the shade of the overhanging trees allowed marauding carp to take turns in the sun.

I enjoy thinking about my fishing and working out problems as they arise (like moving location, for instance). I was fishing a small controller float with an oozing floater on a hair rig, which sat among a scattering of offerings. This wasn’t part of a grand plan, merely me fishing with a freebie that came with an overpriced bucket of bait from a nearby tackle shop run by a grumpy sod. Still, it caught me. But the carp probed the controller like hens would peck at a new addition to a coop, and the floater stuck out like a sore thumb, but more like a bleeding finger. It became obvious that these weren’t stupid fish. Still, they hadn’t seen too many artificial flies before, and Dom was met with instant success as a lovely two-pounder led him a merry dance in the shallows. It’s something I’ve seen a bit of recently… fishing the scum line, where the floating detritus gathers in the wind. The fish seem less on-edge, they are less likely to see you through the dirt, and they more readily search the scum for anything edible that had happen to drop into it. I guess that’s one of the advantages of fishing under trees… there must be myriad bugs that drop into the water. 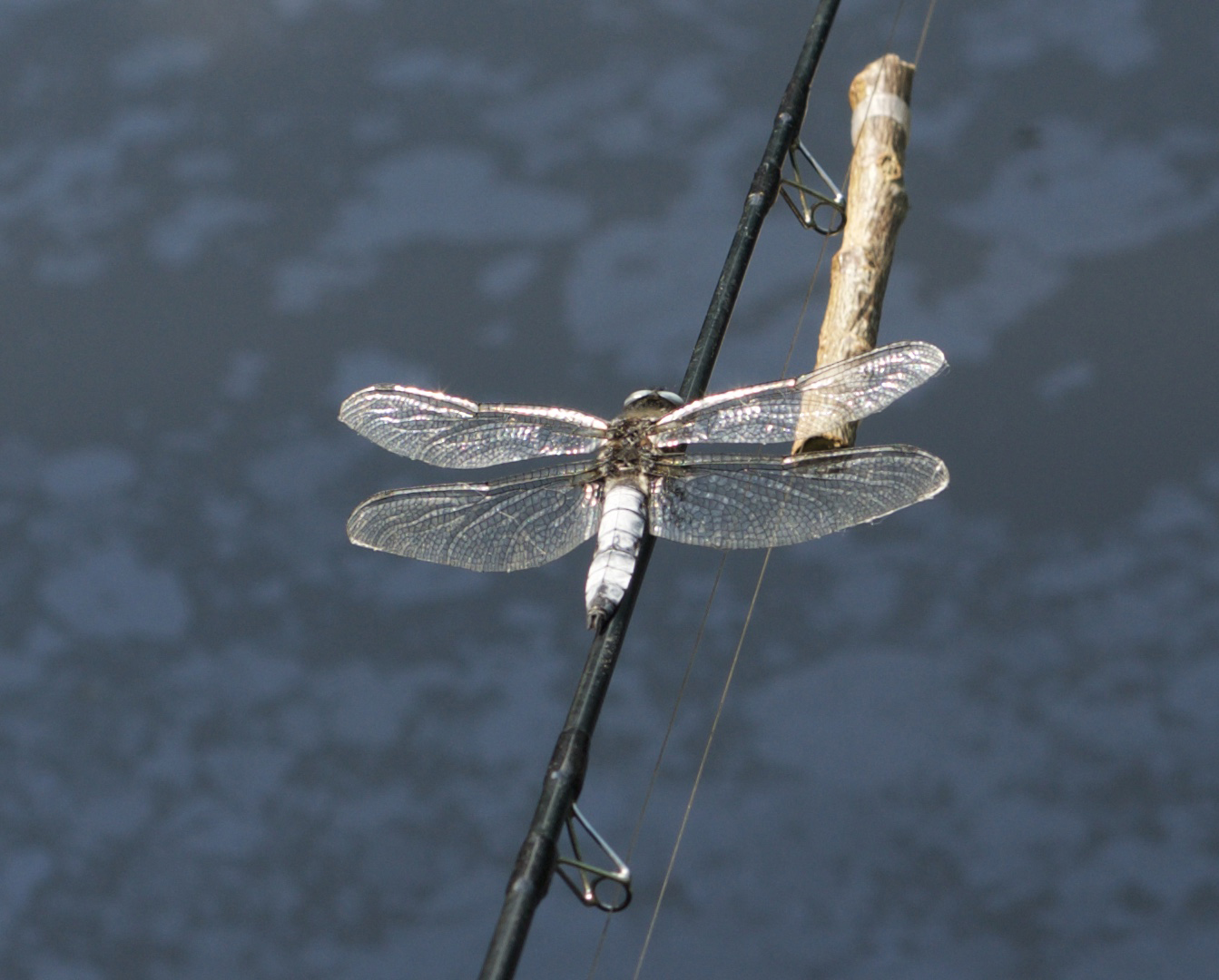 Still, the larger carp gave this area a wide berth. Perhaps they could smell the sweat and testosterone from the bank, two men baking slowly in the sun of the high noon, the odour permeating the heavy atmosphere like burnt bacon in a tiny flat. However, after prolonged feeding in ones and twos, they were happily chomping dog biscuits but ignoring the seeping floater. It’s the first time I’ve used a floater, and I’m not sure of the benefits with cagey, wilder fish. As if its not already suspect that somebody is tossing in delicious morsels, then why not exacerbate the problem by making it even more obvious which one is hiding a hook? I changed to a normal biscuit but they still probed the controller. Perhaps I could use it as a red herring? It was time for a more traditional approach, so a small twig was found. I broke off about about 4 inches and used bands of a similar colour, attached the twig to my line at each end, and crimped extra weight along the line behind the twig so it was out of sight, but balanced at each end to prevent the twig from tilting in the water. Carp are less suspicious of twigs (well-balanced or not), and so it proved when a three pounder gave a good account of itself on my first cast with the new setup. But the intense commotion put paid to that end of the lake, every other fish taking cover and melting into the depths like teenagers running from a car alarm. 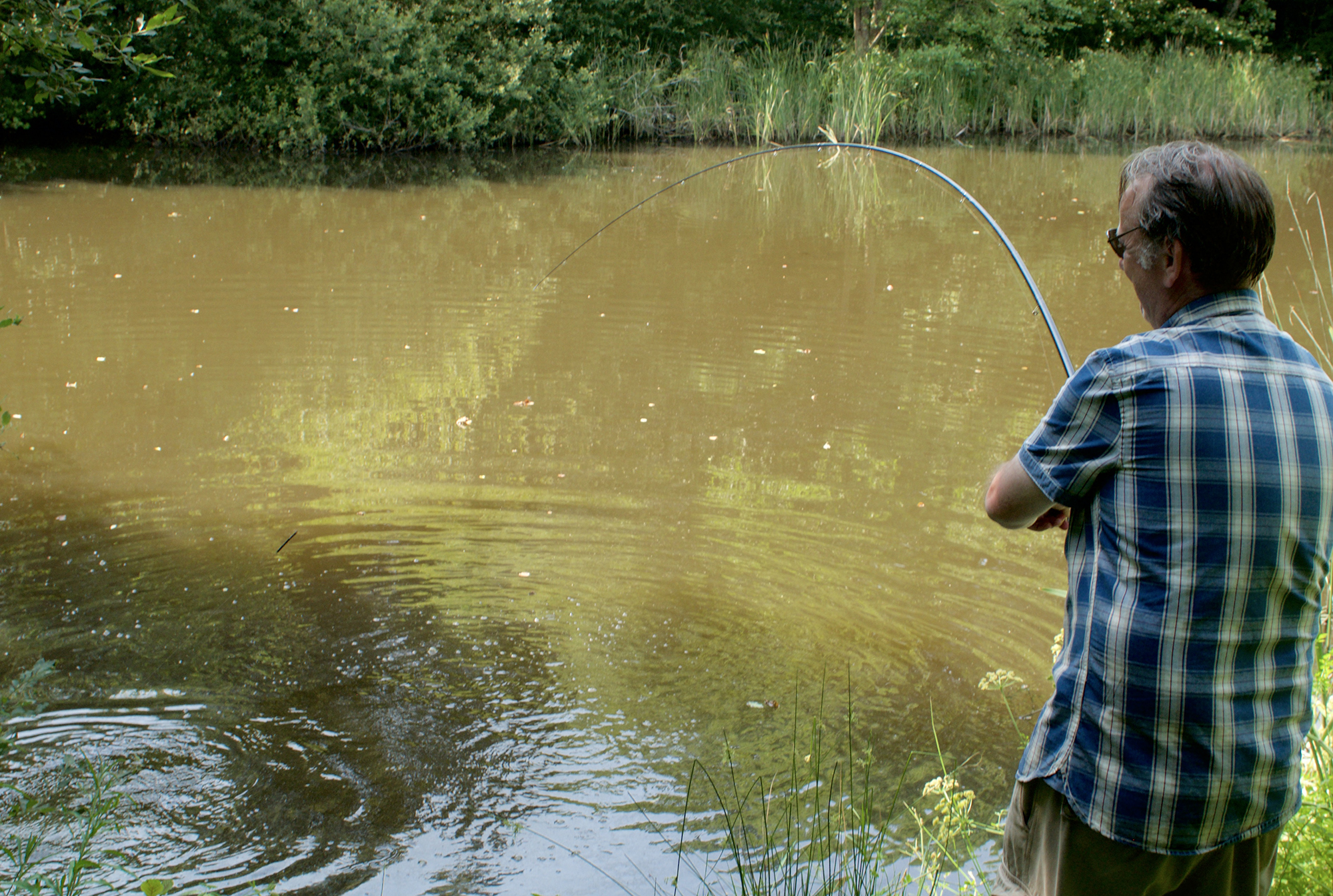 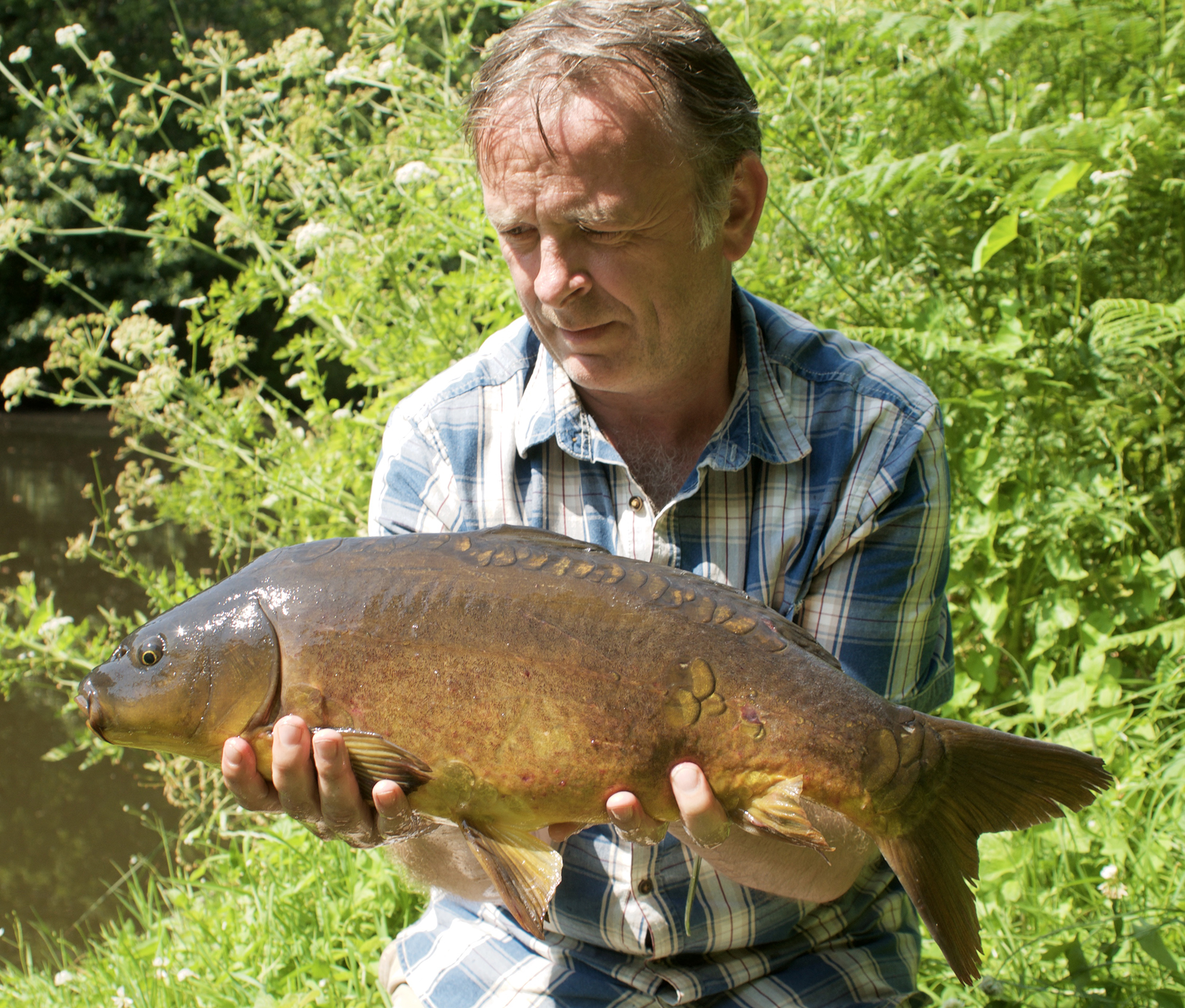 The fish in the small lake are not big—perhaps up to twelve pounds—but that is more than enough for an angler of my limited expectations. It has been a poor year for playing a numbers game, both in totals of fish and their weight. These carp were wary but with careful catapulting we began to lure them towards us, single biscuits laid like a trail of breadcrumbs, until the fish came into range. Adam Fisher of Angling Dreams recently wrote in Fallon’s Angler 10 that the ideal scenario in surface fishing is to get two fish chasing the same bait, and so it unfolded. A decent fish was cruising with intent when from under it appeared a bigger one that bullied its way forward and took the biscuit without hesitation. Christ we had a battle on, but the rod (unlike me) had retained its strength since the 1980s and coped wonderfully. The fish went from open water to under a tree to my left in seconds, and with Dom urging me on I sunk the rod tip and turned its head. But it wasn’t finished there. The sun burned down and how I wished for a cooling pint. But with careful pressure the fish was done and soon netted. It almost looked like a linear, and its colours hinted at an inherited lineage to the older Leney fish that were once in these ponds, and at over 8lbs was the biggest carp I have caught in over ten years. I persuade myself that this is mostly due to the fact that I have rarely fished for them. The fight put paid to the swim for a while, and gave us a chance to grab some shuteye away from the sun, then London called and we made our way back, top-and-tailing the day with that well-deserved cool beer under the evening sky, watching the fox cubs play behind my house, enchanted by nature and remembering the coot chick that met its unfortunate end. Maybe nature has room for the cute after all.

It’s not always easy stepping back in time. Like Acid House, I am given carp a wide berth for a while and concentrated on other fish and other methods, but it was lovely to reacquaint myself with the brutal force of the fish. To fish for them using tackle from the 1980s, a genre that is as comfortable for me as an old cardigan. was reassuring for a man who has recently started working with the millennial generation, constantly reminded (as I am) that the ageing process is never-ending, but that progress is a subjective term. With the wonders of the carp Mecca that is Ashmead to come soon after this trip, I would be stepping even further into the carp world and digging out my bivvy and bedchair from the late 1990s and my heavy chrome solar sod pod. The matching monkey climbers and bite alarms would be dusted off one last time before being passed on to an old friend. Was I opening Pandora’s box, or merely gently caressing a soft goodbye to an old flame? Who knows? But the carp, no matter the size, is a wonderful fish to catch, and whatever the result, this little trip to a quiet part of the world has reminded me of that. 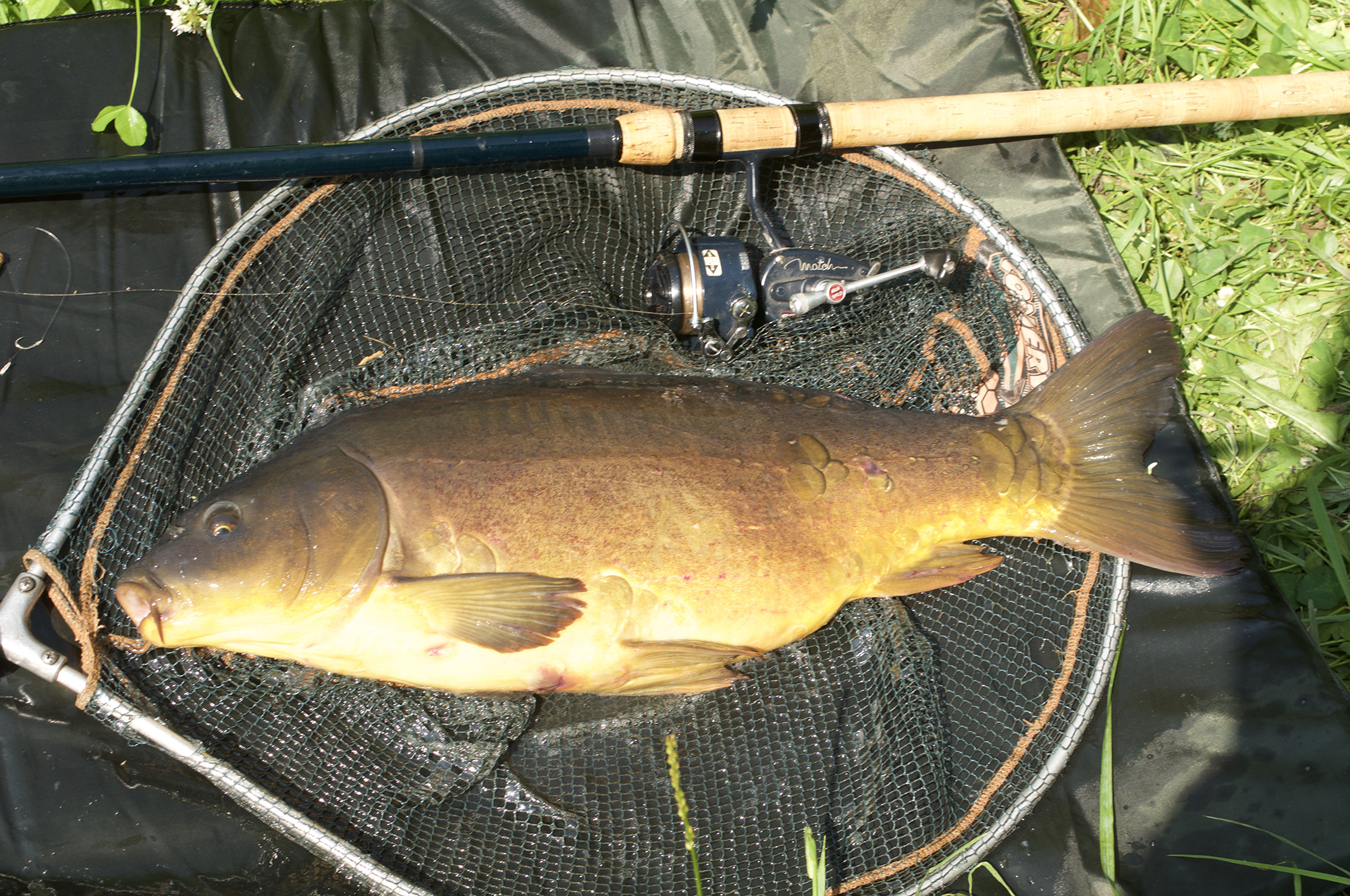