By Garrett Fallon on September 24, 2015 in FALLON FISHES, Uncategorized 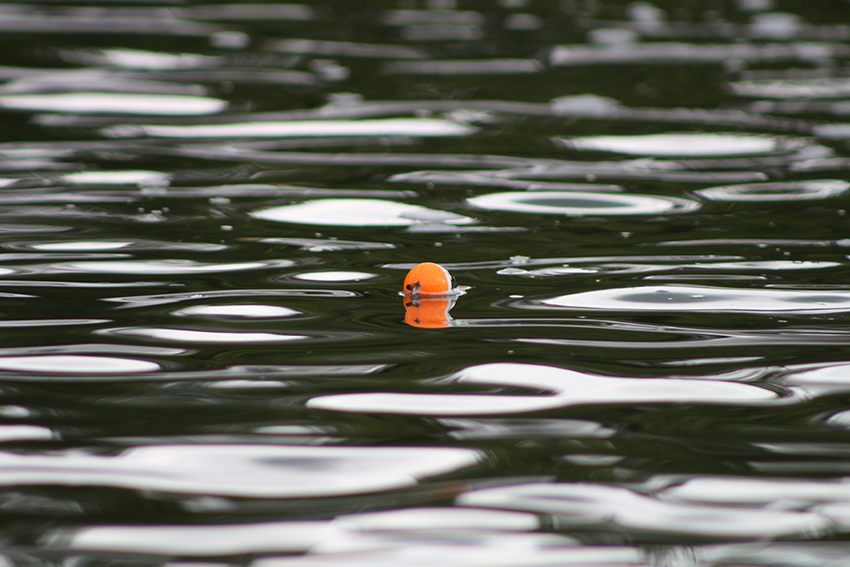 Why is it that we spend so much of our lives running, when really all we’d like to do is walk? We have a propensity to complicate our days, rush through them, fill them with activity, purpose, goals and achievements. But does it actually get us anywhere? Do we actually know where it is we’re trying to go? We keep lists of lists, to do’s that unravel all the way to the floor, and tasks that carry on for weeks because we can’t get to them, gradually turning from the straightforward and mundane into odysseys of difficulty and bad time management. I remember writing something similar over twenty years ago, asking the same question, so I still haven’t managed to answer it.

Fallon’s Angler is only part of what I do, and though I enjoy my work, it’s the part that I REALLY enjoy, and that is why I do it. Otherwise I fear my working life would be without meaning. I need meaning. It matters, though exactly why, I am unsure, but I seem to be a very busy man. The Financial Times magazine ran a brilliantly incisive cover story recently: Multi-tasking: how to survive in the 21st century. I’ve always been told that multitasking is something I, as a man, am supposedly not able to do. I can’t disagree. We have multiple jobs, ‘portfolio careers’, we freelance and hot desk and Skype and conference call and platform share and endorse blue sky thinking, whatever the hell that is. Fuck that shit. Take me to the river. 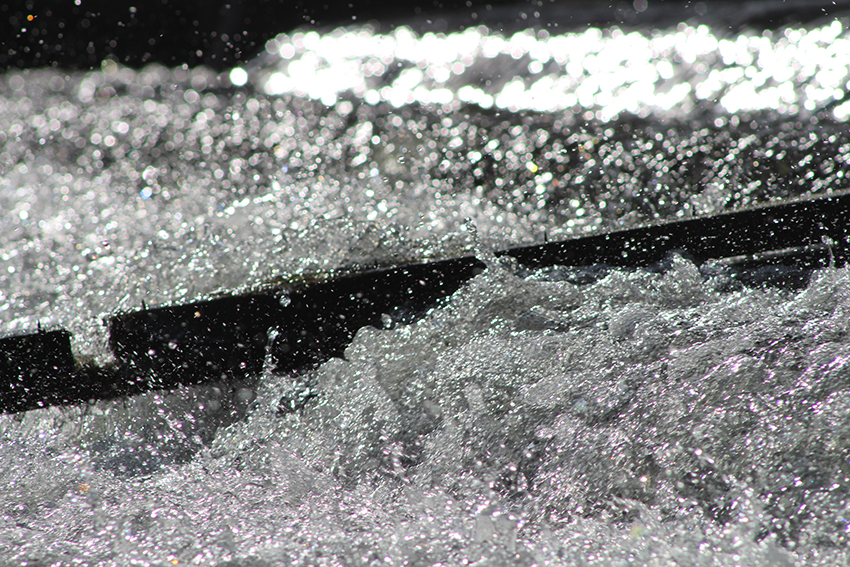 The weir: take me to the river

So, with a head full of micro-troubles from the daily grind I finally managed to take a day off and go fishing. The morning saw me drop my daughter off to school before disappearing into the London Tube network. Like a rat in a sewer I weaved my way through grimy tunnels, the air hot with sweat and urban toil, not a cloud in sight, where the only wind is a false one pushed around by trains hustling through the underground maze, nothing at all to do with nature’s whim. When I resurfaced in Paddington I grabbed my seat on the train as if somebody had thrown me a lifebelt to stop me drowning in a turgid sea of irrelevance. My email was ‘pinging’ as I answered ‘life-or-death’ questions that could easily have waited until Monday, and the stress stubbornly refused to abate. I reached into my bag and produced my current read: The Lost Diaries by Chris Yates. There was a joyous paragraph that hit me like a horse shoe to the forehead: 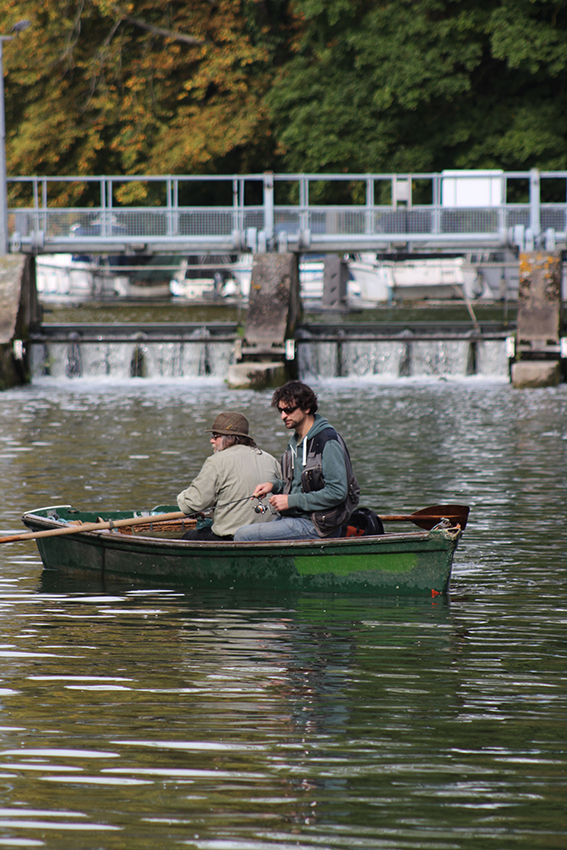 Two men in a boat: Dominic and Steve

“So, though I had, after all, quite enjoyed my visit to Crazyland, it was still very blissful to be travelling away from it again — away to where the trees gradually outnumbered buildings and where, just after the little station at Witley, the train rumbled past a rather nice red-fringed lake.” 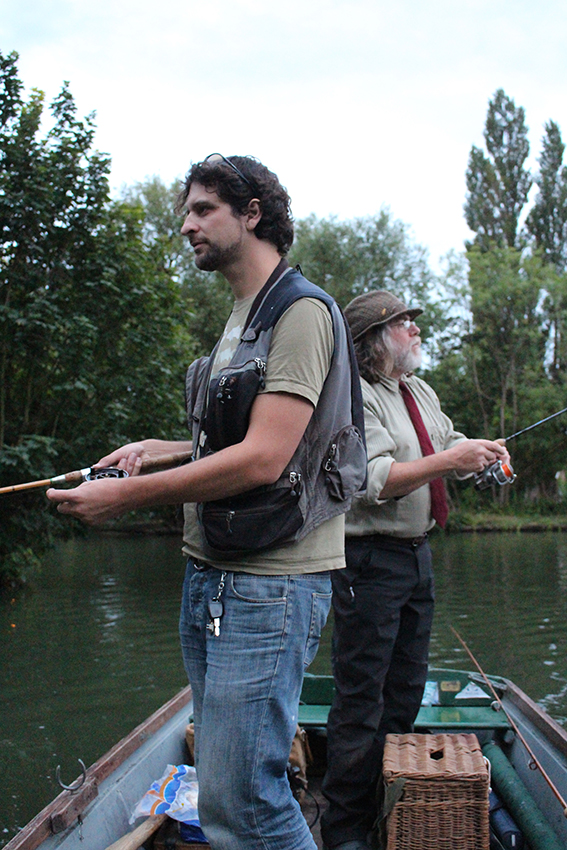 The air opened up and invited me to breathe it in, the landscape grew greener, and water appeared as tantalizing glimpses through gaps in the trees. But I wasn’t going to Witley. When I disembarked instead at Pangbourne, two stops past Reading, I followed my nose, which led me to the River Thames. I could smell the sweet scent of life itself as the river, despite not being at its highest, swept over a long weir that arched in sections around a huge weir pool, tiny droplets of water creating a magical mist in the air that carried downwind, refreshing like a Carlsberg moment: “Worth waiting for.” Looking out over the water, there, placidly fishing in the middle, were my companions for the day, Dominic Garnett, and angling guide Steve Roberts of River Days. I switched off my phone for what felt like the first time in months and climbed aboard. This was a day for forgetting about how busy life was, and what a way to do it.

Steve fishes the Thames weir pools by boat using traditional tackle. His softly spoken, friendly manner makes you feel instantly at home. He busies himself constantly but takes his time in a reassuringly purposeful way, but without ever appearing to rush. You forget about time in his company, as time itself seems to slow down. Outside pressures become irrelevant. You only know the time of day by the setting of the sun, the generous, artisanal feast he spreads out from a hamper at lunchtime, or the tea that is taken in the afternoon. His collection of vintage rods, carefully matched with reels of an appropriate age, sets the scene for a day when you easily forget about how busy you were, and lose yourself sometime in the early twentieth century, afloat in a boat once owned by the great river man himself, Roger Barnes. 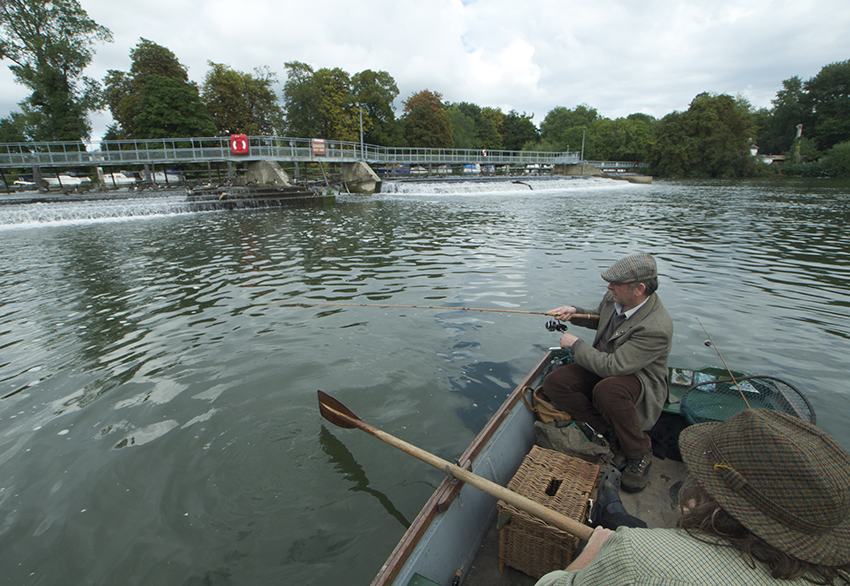 Spinning with the Alcocks Light Caster 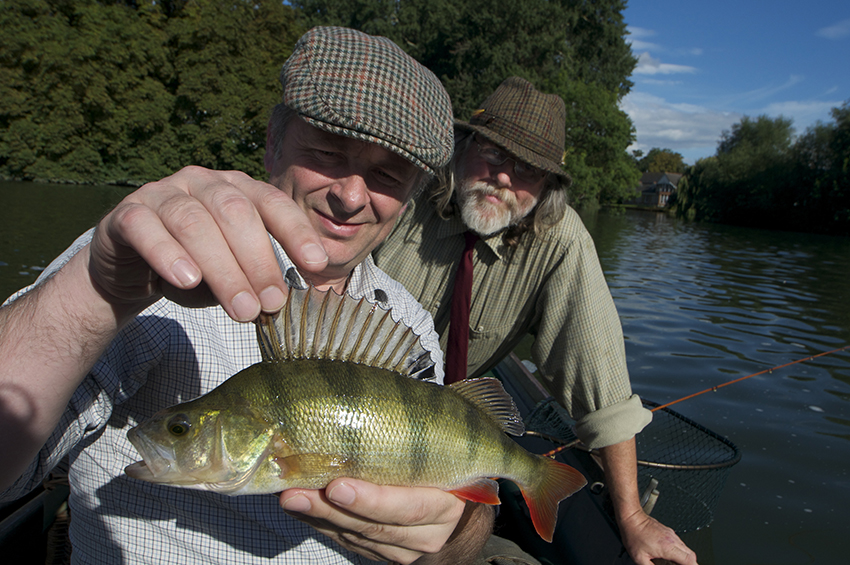 Best perch of the day: not big, but beautiful

I have known Dominic Garnett for over a year now and not only is he an insightful, crafted writer, but he is surely one of the great innovators of angling. His mind never stops working and his intuitive fishing brain and amply stocked reservoir of fishing anecdotes makes for great company, even more so in a boat, where he couldn’t escape me. He must have felt I picked his brain like a vulture would a carcass. While Steve used cane, Dominic held in his hand the smallest rod I have ever seen, fit for a hobbit. We had worked together on his brilliant book Tangles with Pike the previous year, and the chance to pike fish with him was finally being grasped in style, but I didn’t expect a toy rod. He is always full of surprises.

Late last year I had my head turned by a piece of cane lent to me by a kind friend, John Oliff-Cooper. He introduced me to other likeminded souls, including Michael Comyns from Ireland, and their approach to angling inspired me to abandon carbon for the more crafted approach. The feel of cane bending into a fish, and the beauty of a spinning centrepin that is 80 years old and working like it was new makes complete sense to me. With the exception of a fly fishing lesson, a cheap beachcaster that came as part of a sea-fishing starter kit, and my trusty squash racket, I hadn’t held carbon in my hands until Dominic handed me the hobbit’s rod, and every perch in the river seemed hypnotized by the little jigs that we worked around that pool. We caught a great many perch, and when I wasn’t using Dominic’s rod, I was stepping back in time with Steve’s Alcocks Light Caster, jumping across generations in the confines of our floating utopia. Whatever you use to do it, jigging is deadly for perch.

Then we dropped anchor in a shallow spot known as the Cliff, and caught bleak with maggots for using as live bait. Perhaps that is where they got their name, because once those agreeable little fish are in the bait bucket, their future is bleak indeed. I had never live baited before. It was banned in Ireland when I was growing up, and the closest we came was when old Esox turned up uninvited and grabbed its dinner. I was unsure of how I would feel about it, and still am, but it’s traditional in England, and that is where I’m fishing. Two perch agreed with me, nothing of any real size, but the voracity with which they devoured the bait proved its effectiveness.

After one of Steve’s bankside feasts (oh, the pork pies) and a savored, cold pint, we took on the pike of the pool. My float dipped first, and I learned quickly that you strike very early when live baiting to avoid deep hooking, and a seven-pounder put a good bend in the Mark IV. All was under control until it swam under the boat, and then I remembered the anchor rope. It wrapped itself around it and only some quick thinking by Steve got it into the net before the line shredded. It was long and lean and mean, a real pike, full of menace and primitive instinct, looking for all the world as if it’s existed since the beginning of time. So, my first Thames pike, my first live bait-caught pike, and enough nuggets of wisdom garnered from Garnett and Roberts to bring pike fishing within my grasp again. I realized then that I hadn’t looked at my phone all day, that I had forgotten about everything except that fish. 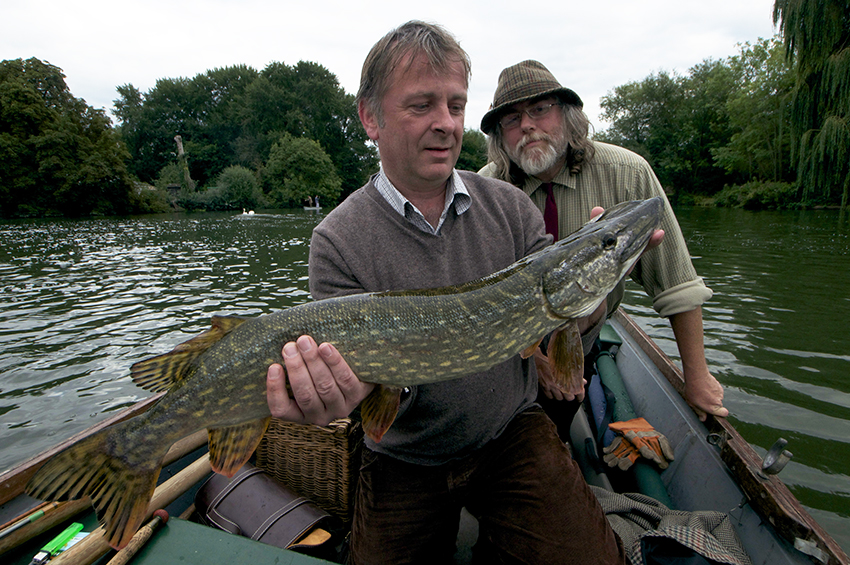 The perfect predator: my best pike of the day

Somehow the day ebbed away and the reflection of the nearby streetlights grew more defined against the water. The weir became a dark mass against the rose-tinted sunset behind, and the earlier incessant rattle of tube and train was replaced by the never-ending roar of the water tumbling into the pool. As the day drew to a close, we found ourselves trotting with bread for roach and chub, but the river was low and the trotting was slow as a result. When it’s higher, oh my, what a trot we’ll have in that spot between two islands, completely inaccessible to land-lubbers, a private paradise only for those brave enough to leave the bank and get afloat, in a boat, into the river. 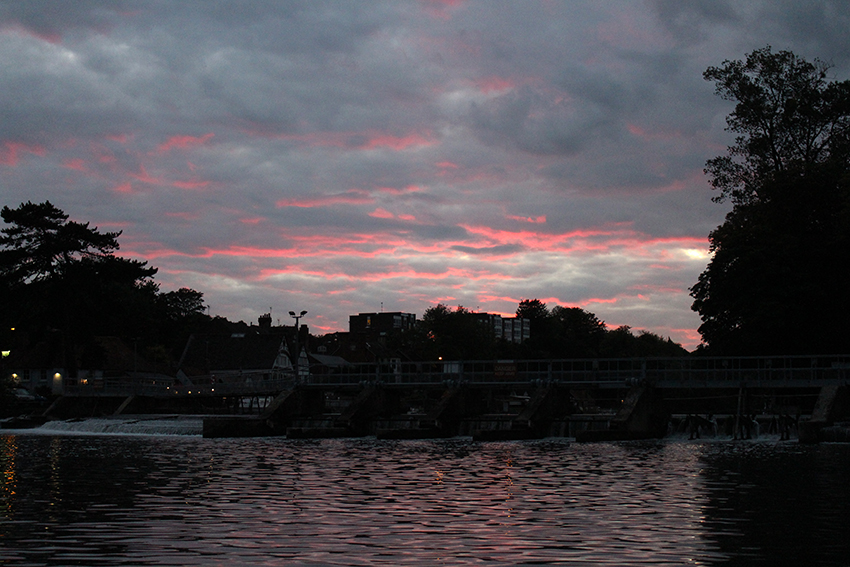 A man of many, many talents - The General delivers another selection of mouth-watering* recipes in the second part of his guide to cooking coarse fish - in Issue 19 of Fallon's Angler.

*disclaimer - recipes likely to cause extreme risk to health and even death. ... See MoreSee Less

A Letter from America - Tony Carmody fishes for bluegill in curious surroundings in St Louis....

Read his words (and his favourite recipe) in the latest Fallon's Angler.