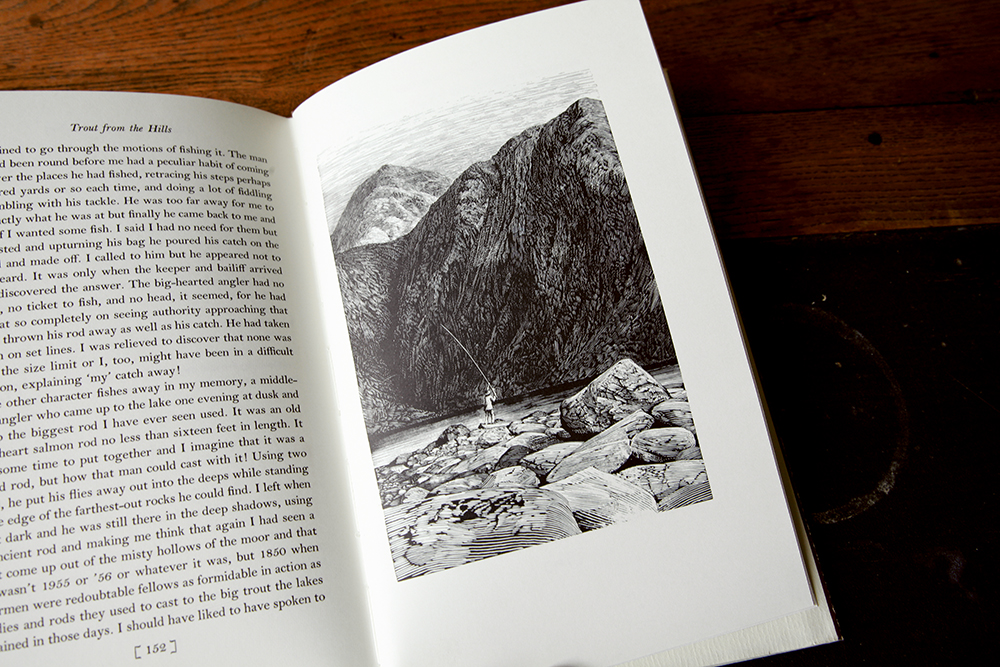 With over 30 books to his name, amongst them evocative, pastoral titles such as The Poacher’s Handbook, Fresh Woods and The Idler’s Companion, it would seem wholly natural that somewhere, within the bibliography of John Kincaid McNeillie, there would be a work dedicated to angling.

Published in 1961 and written under the pen name Ian Niall, Trout from the Hills is—in its subject matter at least—a highly original and exceptionally rare book. I think it’s fair to say that there are precious few angling titles whose sole focus is the pursuit of trout from the remote mountain lakes of Britain.

Although the author makes clear almost from the outset that the angling described in the book is set predominately on the high llyns of Wales, he is also quite explicit in pointing out that this is not a guide book. Nor is this a ‘how to’ manual, though there are things to be learnt from Niall’s informal, conversational tone.

We’re told of the dispositions; the qualities required in ‘the mountain lake fisherman’, of the flies that catch the fish, how they were tied, their ingredients. We’re told the truth about the trout; that they’re mostly small, stunted, hardly worth the effort, and of the half-truths—the exceptions, the cannibals—the big fish sometimes seen yet seldom hooked. And of course we’re told of the waters themselves, mysterious, legendary waters whose names are whispered, if spoken at all, for fear their whereabouts will fall on the ears of the uncouth—the worm angler, the otter boarder, the poacher.

Into each chapter the author weaves personal anecdotes, tales which those of us who ourselves tramp the mountains in search of trout will recognise, tales of becoming hopelessly lost in the hills, following rumours, off on a wild trout chase. It’s through these stories that the author seems to take us by the hand and walk us up those rocky trails, following the tumbling becks to the ‘Places Without Names’.

As if Niall’s words weren’t enough in portraying the ruggedly beautiful environments in which the reader finds himself, we are given a helping hand in the 1991 second edition of the book in the form of some of the most beautiful illustrations you are ever likely to see—intricate, achingly detailed wood block prints, carved by the hands of master printmaker Christopher Wormell. These are powerful images; brooding, moody, lucidly capturing the drama of the landscape, the viewer can almost hear the peep of the sandpiper, feel the breeze upon his face.

What Ian Niall has created here, if we consider the book in its entirety, is a wonderfully vivid portrait of a unique sub-genre of fly fishing, a form of angling in which the arduous journey to the water, the ever changing atmosphere of the hills and the cry of the raven wheeling over the wild corrie are at least of equal significance to the actual catching of fish.