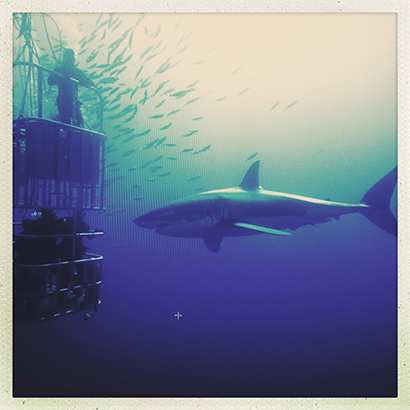 For many years South Africa was regarded as one of the premier spots in the world for shark fishing, with anglers coming from across the globe, many hoping to hook a great white shark. As the great white became increasingly threatened throughout its range, many countries, South Africa included, banned the fishing for them.

This caused financial difficulties for many skippers. The prime target for many of their clients was now off limits – and the penalties were high.

Some, though, embraced the change and instead invested in some seriously strong cages and plenty of chum. Cage diving for sharks has become big business in South Africa and Walker Bay, around 100 miles to the south-east of Cape Town, is one of the very best places to see great whites.

In the town of Gansbaai, at least six different boats operate on a daily basis. With a chum slick in the water, sharks of many species will begin to appear, and when they are confident enough, the cage is lowered in.

Fishpool quite likes the idea. Though seasickness might be an issue. And then there’s the flight to South Africa… perhaps a trip to Brixham Aquarium might be better…