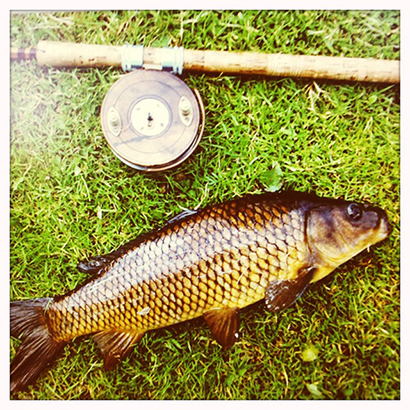 Long before the King Carp made it to our shores, a Danubian strain of Cyprinus carpio was finding its way into our lakes and rivers. Imported as a food source, these ‘wild’ carp were stocked into pools across the country by Medieval Monks looking for an easy to maintain food source.

These fish were slim and slow growing, rarely weighing beyond ten pounds. As bigger, more dominant strains of fish, such as the Galician, began to spread, the genes of the wildies were quick to dilute, and today only a handful of waters remain with a stock of genuine ‘wild’ carp.

This is a shame, because the wildie is a wonderful fish. It fights as hard as a king carp twice the size, and with large fins and sleek lines it looks superficially like a barbel.

There are an intrepid few, such as Fennell Hudson (see Places we Like) who actively seek and then champion the wildie, often travelling into the wilder parts of Britain to find untainted waters.