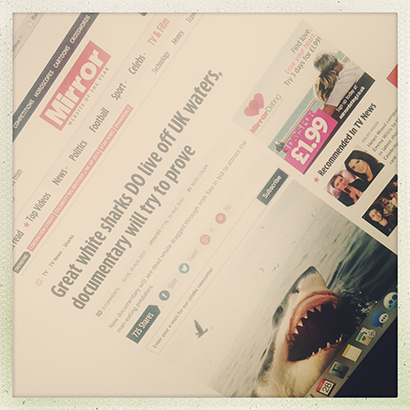 Every summer, with Parliament out and news stories slow, someone will spot a shark off The Needles or the Cornish Coast and the papers will explode with tales of Jaws prowling around our beaches.

Invariably, the sighting proves to be a basking shark, an enormous, but utterly harmless plankton eater.

Just occasionally though, these stories carry a little more credence. They come from experienced skippers – people who have spent a life on the sea bobbing among basking sharks. We have had mako sharks and tunny off our shores so why not a great white?

The great white shark is found throughout the Mediterranean, along the Portuguese Coast and into the Bay of Biscay. We are not many tail flicks further north and the Gulf Stream provides a rich environment along our west coast.

In a former guise, Fishpool once tracked down Jackie, a prawn fisherman who worked the Inner Hebrides. He had twice seen a great white and was indifferent to it, suggesting they came every summer to feast on the seals.

It was a seal’s carcass washed up in Cardigan Bay that presented the best evidence yet of a great white. The fresh remains had teeth marks that matched that of a white shark – but how far offshore was it bitten?

Alas, maybe Ben Fogle will answer all these questions when he drags a whale carcass into the Celtic Deep in the hope that one of nature’s great predators is a lot closer to home than some of use would like to believe.