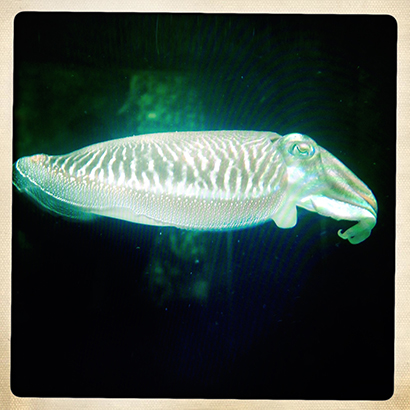 Yes, Fishpool is well aware that the cuttlefish is not technically a fish, but as Dominic Garnett proved in Fallon’s angler Issue 1 (and Fishpool mentioned in Bits and Pieces Issue 7), squid and cuttlefish can be successfully targeted with rod and line.

The most frequently encountered species in British waters is the common cuttlefish (Sepia officinalis), which, though largely absent around our Northern shores, is becoming increasingly common in the warmer seas of the south. They are short-lived molluscs who sport two tentacles and eight arms, all of which carry suckers that are use to clasp onto prey.

They are active hunters, catching small fish, crabs, worms and even smaller cuttlefish, but in turn are predated by all manner of fish and marine mammals. Like the squid and octopus, the cuttlefish has an ink sac which it rapidly empties in order to evade capture. It also possesses a remarkable ability to change colour as a means of camouflage – particularly odd when we consider that its ‘w’ shaped eye does not allow the animal to see in colour, instead perceiving the polarization of light.

Many of us know cuttlefish for their ‘bone’ – which is formed from aragonite and provides buoyancy and is often given to caged birds as a source of calcium.

A walk on the beach after a heavy sea will often find dozens of these cuttlebones, which are a unique feature of the species.