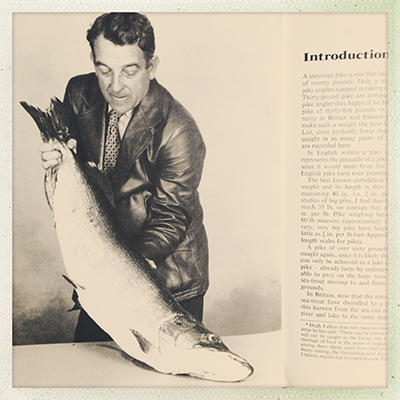 There was a time – a dark, dark, time – when Fishpool was merely a leaf floating on the breeze and Mr Fallon, our hallowed master, was forced to conjure up Bits and Pieces for himself.

One of the first entries in ‘Things we Like’ was The Domesday Book of Mammoth Pike – and Fishpool certainly approved. Written in 1979 by angling historian Fred Buller, this remains one of the most comprehensive, and awe inspiring, selection of pike tales ever penned.

Buller’s knowledge of pike is second to none, though his insatiable thirst for facts and fables are not limited to a single species.

Buller was a successful match angler in the 1950’s, winning an array of trophies and the respect of his peers. As he broadened his skills, so he discovered a penchant for writing, and in Hugh Falkus he found someone who shared his ideals of angling and writing. The two wrote the 1975 book, Freshwater Fishing, and the 2001 title Dame Juliana: The Angling Treatyse and its Mysteries.

Aside from his collaborations with Falkus and his compilations of monster pike, Buller, has also written The Domesday book of Mammoth Salmon (Vol 1 and 2) and is the patron of Angling Heritage.