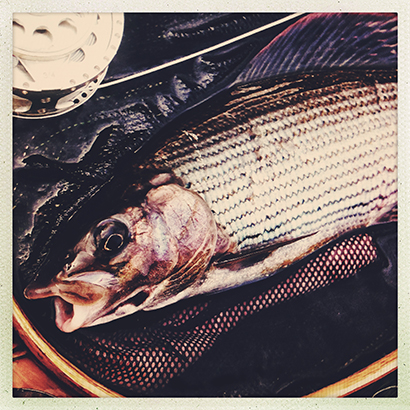 The graying (Thymallus thymallus) is an often overlooked fish. The presence of an adipose fin places the species (taxonomically at least) with the Salmonidae, but the grayling has not been looked upon favourably in many rivers, such as the Itchen, where it swims beside the more desirable trout and salmon.

Most coarse anglers, meanwhile, are unlikely to come across the grayling by accident. Its love of fast flowing chalk-stream environments means it swims largely unnoticed by all but those who specifically target it.

In recent decades though, both coarse and fly anglers have begun to appreciate the ‘lady of the stream’.  The grayling is a stunning fish, with small-scaled flanks that glisten between slate and turquoise, and a huge, spotted, crimson edged dorsal. The fish use these fins like sails, drifting effortlessly across shallow runs, and cutting against the current when hooked. They have a varied diet, and can be caught on nymphs, dry flies, maggots, worms and sweetcorn, while their propensity for feeding in the coldest of conditions make them a viable target throughout the winter.

A grayling in excess of two pounds is a big fish, though in a few rivers, such as the Upper Severn and the Dorset Frome, they may grow to twice as large. Whatever the size they are a worthy quarry, and well worth targeting this coming winter.