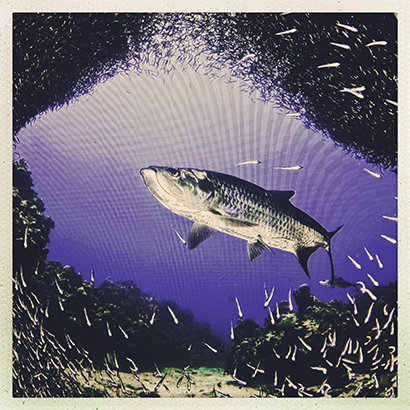 Perhaps it is its similarity in appearance to a sprat or bleak, but the tarpon is a fish that really doesn’t look as if it should grow as big as it does.

The closely related Atlantic and Indo-Pacific tarpon (Megalops atlanticus and Megalops cyprinoides respectively) are fish that require warm water in which to breed, but, aside from the temperature, are tolerant of fairly poor water quality. The swim bladder of the tarpon has evolved to enable the fish to ‘gulp’ air from the surface, meaning the fish can survive in brackish water and waters containing low oxygen levels.

The tarpon is a long-lived fish that does not mature until it is between 7 and 13 years old. As they age so they grow, and their size (8 feet long and 200lb in weight), and fearsome fighting qualities, make them popular species among game fishermen.

Tarpon are often active in shallow water or near the surface, making them ideal fish to target with saltwater fly gear or floating plugs. The mouth is bony and hooking a tarpon can be tricky, and once on, the fish will frequently leap clear of the water. As a result the fight can be spectacular, if a little damned dangerous.