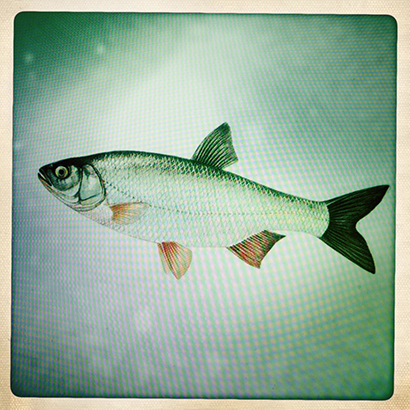 Common across much of Northern and mainland Europe, the ide (Leuciscus idus) does not naturally occur in Britain, though populations are becoming established in an increasing number of our rivers.

The golden and blue varieties of the ide (more commonly known as orfe) have long been stocked as ornamental fish in garden ponds or in commercial fisheries such as Angler’s Paradise. In some areas, floods have seen these fish finding their way into other waterways, and populations in rivers such as the Hull and Trent are sufficient to make them a viable target for anglers.

The ide (to ease confusion, Fishpool will henceforth refer to orfe—in all their variations—and ide as a single species) is closely related to the chub and though they are similar in appearance, the ide is less streamlined and has a smaller mouth and scales. In fact, it looks rather like it could be a roach x chub hybrid, and this confusion has led to some serious knee trembling as anglers mistakenly thought they had caught the roach of a lifetime.

Away from our shores, the ide is causing concern in New Zealand where illegally imported fish have found their way into rivers such as the Waikato. Whether they spread further and quite what impact they will have on the native ecology remains to be seen.