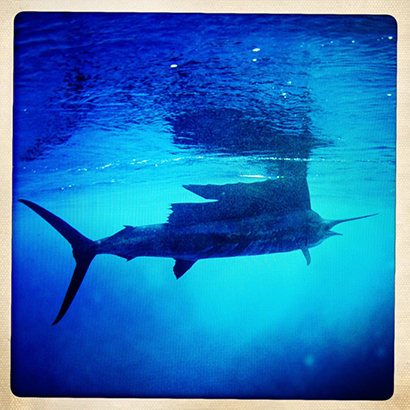 There is some conjecture as to whether there are one or two species of sailfish in our Oceans. Some bodies recognise the Atlantic (Istiophorus albicans) and Indo-Pacific (Istiophorus platypterus) as separate species, yet they are anatomically the same and most authorities only recognise the single species – platypterus. Despite so often swimming stubbornly against the flow, Fishpool will, on this occasion, go with the majority.

The sailfish is a stunning looking creature. A billfish, it has the long, sword-like upper bill so typical of the family, and also a huge sail-like dorsal fin from which it takes its name. The sailfish is an extremely fast growing species and also has the ability to change colour instantly, an ability with which it confuses prey and likely communicates with other sailfish.

Despite growing up to ten feet in length, the streamlined body of the sailfish means it rarely weighs more than 200lb. What it ‘lacks’ in size though, it more than makes up for in speed. This is the fastest fish that swims – a sailfish has been clocked at an incredible 68mph – hooking one must be terrifying.

Such speed has made them one of the most sought after game fish, with anglers such as Zyg Gregorek spending hours afloat waiting to be electrified….