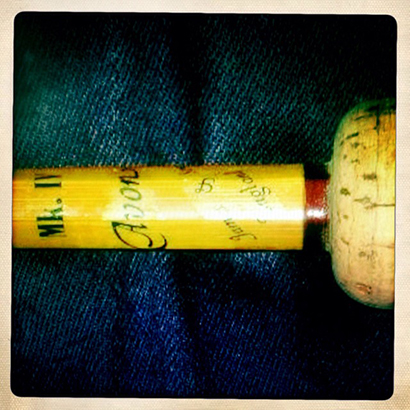 In the early 1950’s, a small group of anglers were revolutionising the notion of carp fishing. Deemed by many as uncatchable, these men discovered that not only could they be fooled, but thanks in part to the actions of Donald Leney (see People we Like) they could grow massive.

One of these men was Dick Walker, who was struggling to find a rod suitable for his needs. After some experimentation he built from scratch the Avon Mark IV – the first purpose built carp rod ever made. Ten feet long, with a long handle to aid two handed casting, the Mark IV was tapered to form an action specific to Walker’s wishes. In September 1952, at Redmire Pool (see Places we Like) Walker used his rod to catch a new British record carp, and the Mark IV became one of the most sought after rods ever. The design was aped by numerous rod builders, and Walker’s original appeared in Passion for Angling – at the generosity of owner Chris Ball – where Chris Yates landed two 20 pounders in front of the camera. Yates himself caught a record carp of his own back in 1980 – from Redmire Pool – on a rod built by Dick Walker!

Today is the 25th anniversary of my Dad's passing. Niall Fallon was his name. Dead now, longer than I knew him alive. I will always miss him, but his wisdom continues to be a guiding presence, long after he's gone. He wrote a highly regarded book on Irish fly fishing. I named my magazine is his honour, and to the honour of his brothers and parents who painted pictures, whether it be with words, or sculpture, or the use of a brush. I post this story every year, but it always makes sense. My Dad's greatest trout…
fallonsangler.net/out-of-the-darkness-my-biggest-trout/ ... See MoreSee Less

Fallon's angler is with Adam Chetwood.

The latest angler to bare all in our 'What's in your bag?' feature is musician Adam Chetwood.

Adam is fond of a spot of carp fishing, but is never more at home than on the banks of the Hampshire Avon chasing roach and chub.