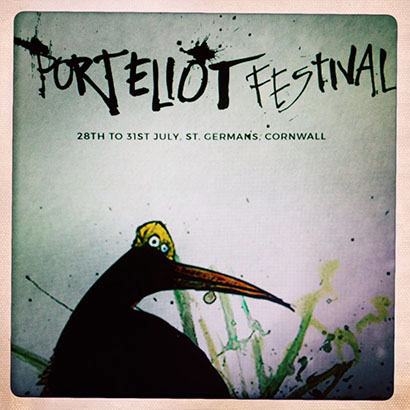 Every summer, a few thousand like-minded souls converge on the banks of the River Tiddy in East Cornwall, where they share the music, literature, comedy and the altogether laid back nature of the Port Eliot Festival.

The 6,000 acre Port Eliot Estate is the ancestral seat of the Eliot family, whose present head Peregrine is the 10th Earl of St Germans. The Literary festival began in 2003 and has developed a reputation for being quirky and diverse – if a little middle class.

The Festival has had a long running association with Caught by the River (and Jeff Barrett), who have a stage, rather appropriately, near the river itself. Here they run workshops, play good music and give interesting people the opportunity to talk about interesting things.

Plenty of faces known to readers of Fallon’s angler might be found lurking at the Caught by the River tents. John Andrews is a regular, Jack Sellen may be found behind the decks and poet Will Burns might well be in residence. In previous years the likes of Chris Yates and Jon Berry have been spotted loitering too, while other angling writers to have read there include Luke Jennings, Charles Rangeley-Wilson, Tom O’Reilly and the late and much missed Roger Wyndham Barnes.