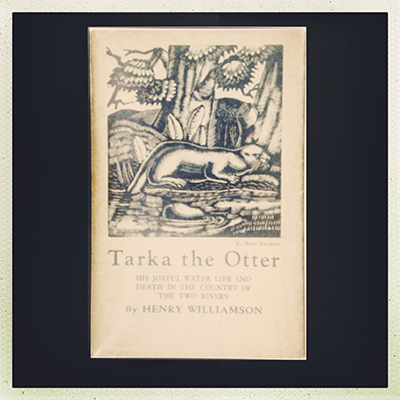 The otter (Lutra lutra) has seen a dramatic shift of fortune in Britain over the past few decades. Previously persecuted, their range was limited, and away from the coasts and more remote river habitats, the mammals were largely absent.

In 1927, Henry Williamson published his novel Tarka the Otter: His Joyful Water-Life and Death in the Country of the Two Rivers. Though the title was rather a mouthful, the subject certainly didn’t lack bite.

Williamson spent much of his own time studying otters in north Devon, and begins his tale with Tarka’s birth, in a holt on the River Torridge. Though often regarded as a children’s book, Williamson never shies away from the brutal reality of life. Tarka spends his life on the run from the local Otter Hunt, and though Williamson clearly respects the skill and understanding of the hunters themselves, he offers no quarter when describing the climax of the hunt itself.

There are many people in the present day who are concerned about current numbers of otters. Though their presence has caused local decimation to fish stocks, a balanced habitat should support predator and prey. Perhaps the problems lie a little deeper than within the otter’s holt.