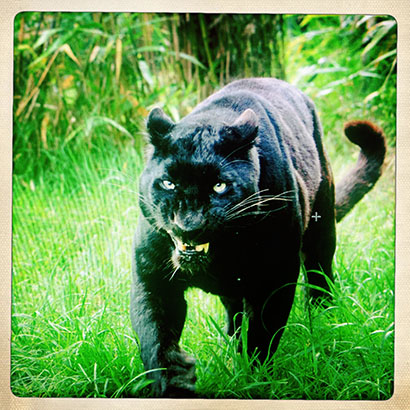 In the summer of 2014, broadcaster Claire Balding was recording part of her Ramblings series for Radio 4 when she was stopped, rather abruptly, in her tracks.

‘Gosh,’ she was heard to say, ‘We’ve walked out on to the road and turned left, and sitting in the middle of the road ahead of us was the most enormous black cat.’

Claire described a panther-like animal as big as a dog – but could it really have been a big cat?

Fishpool did a bit of digging. Claire was walking on The Doward, a couple of miles west of Symonds Yat, in the rugged and forested Wye valley. This area is home to some of the most ancient mixed woodland in Britain, and wild boar are already well established in the area. Away from Claire’s sighting, though, there are plenty more – in fact, a root around the local newspapers throws up seemingly regular sightings. A local man also offered Fishpool details of his own encounter – he couldn’t believe what he had seen, but assured me that he had witnessed a very large, black cat.

Fishpool is open-minded to the whole notion, but should an invitation to fish the area come my way, I’ll be sticking a jumbo bag of cat biscuits into my fishing bag…