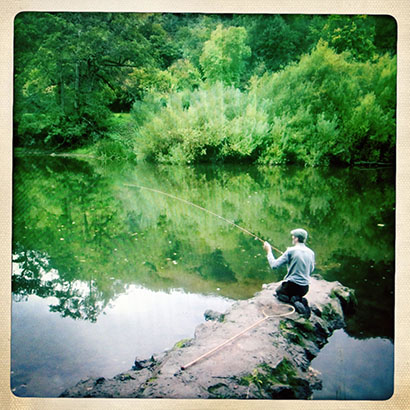 It could be argued that the Wye currently offers better fishing than any other river in the British Isles. Measuring 134 miles, the Wye is the fifth longest river in the UK, and flows from its source at Plynlimon, high in the Cambrian Mountains, through towns such as Builth Wells, Rhayader, Ross, Hay and Monnow before emptying into the Severn estuary at Chepstow.

In the pacy upper reaches, brown trout and grayling are the prime targets, while dace and chub are the first coarse fish to make an appearance. Every bend of the river seems to offer a different opportunity and a different view. The geology if the Wye valley is almost as fascinating as the fish themselves, and some of the vistas, particularly around Symonds Yat and the ruins of Tintern Abbey, will almost knock you off your feet.

The salmon, for which the Wye is famed, still run, and though Doreen Davey’s river record of 59lbs 8oz in 1923 is unlikely to ever be beaten, some very big fish were caught this spring.

The Wye supports the greatest run of twaite shad in Britain, while in recent years the barbel has colonised much of the river and suits the power and beauty of the river rather well.