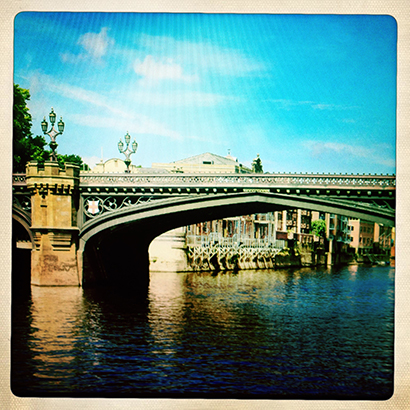 The etymology of our rivers is a fascinating subject. The names of many of our waterways recur across the country, and the ‘Ouse’ is no exception. There is the Great Ouse (see Bits and Pieces Issue 26) of course, alongside rivers suffixed by Sussex, Little and this Issue’s focus, the Yorkshire Ouse.

This particular stream doesn’t just share its name, it also has rather peculiar origins. The River Ure has flowed for 74 miles and already collected such notable tributaries as the Swale and Cover by the time it meets the tiny Ouse Gill Beck at Cuddy Shaw Reach. From this point, until the river empties into the Humber Estuary, the Ure is no more – and is instead known as the Yorkshire Ouse.

There are suggestions that this change of name might in fact be down to a change in pronunciation. The river was previously known as the Usa, which had its origins in the Celtic tongue but may well in fact have been a derivation of Ure – which is believed to have Roman roots.

It is all rather confusing to Fishpool, so rather than dwell on the point, let us consider the fishing. The Yorkshire Ouse is a river that reacts dramatically to the weather. Heavy rain in the dales or moors can see the level rise rapidly, but for those prepared to persevere there are good fish to be found. Barbel are endemic here, while chub, pike, perch and roach are caught every season and there is even a run of salmon to be chased.