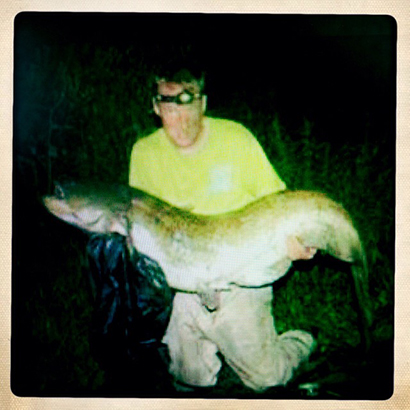 Back in July, Neil Bridges was fishing for barbel on the River Severn at Ripple. It was dark when he hooked into something rather larger than he was expecting. For 75 minutes he battled a fish that turned out to be far too big for his landing net, and ultimately he had to drag it onto the bank by hand. It was a Wels catfish (Silurus glanis) and it weighed an incredible 94lb.

The Wels is not native to Britain, though it is widespread across mainland Europe and grows to enormous size on rivers such as the Volga and the Danube.

In the late 19th Century the Duke of Bedford imported 70 Wels which he then stocked into his lakes at Woburn Abbey. They survived and bred, and through the course of the next century began to find their way, both legally and illegally, into waters across the nation.

It is likely that the Wels has found its way into many of our river systems. Fish have been taken on the Thames as well as the Severn, and there are tales of captures on the Trent, Kennet, and Yorkshire Ouse. There are concerns about the impact they may have on native species, but in the short term, be careful where you dip your toes….