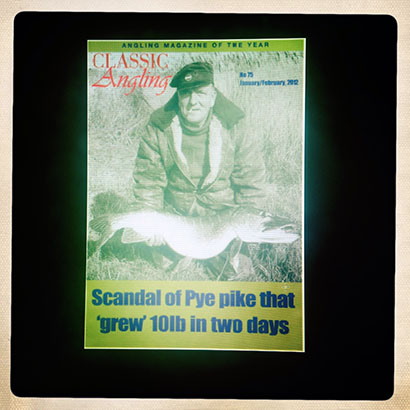 As Fishpool was nosing through the 1963 edition of the Anglers’ Annual, a familiar name caught his or her eye in the Coarse Fishing Catch Review section. Captor of one of the biggest pike of the year (a fish of 32lb from Hickling Broad) was Dennis Pye. A further glance below at the rudd report sees Pye mentioned once more – he having caught three different three-pounders the previous season.

Dennis Pye is a legendary name in East Anglian angling. A Fish shop proprietor by trade, his ability with a rod and line earned him a reputation as one of the finest anglers in Britain. He was particularly associated with pike, though, as the rudd report in Anglers’ Annual suggests, he was more than able to turn his hand to other species. He wrote books on angling, countless articles and became involved in the design and manufacture of rods, reels and tackle.

Yet his legacy is tarnished. Pye has gained a reputation for exaggerating his catches. A prize-winning pike he claimed at 34lb was allegedly weighed by another angler who found it to be ten pounds lighter. A similar claim is made about an Irish caught pike that Pye claimed at twenty pounds but was determined to be far less. The sad thing about such tales is that mud sticks, and being no longer around to defend his name, Dennis Pye will never be remembered for the fine angler he surely was.