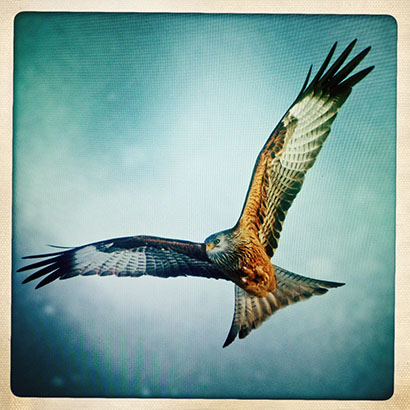 A point Fishpool has already laboured in this Issue, is that we live in a world where too many species are in decline or endangered – often at the hand of Man. So let us celebrate a success story of the past twenty years.

The red kite (milvus milvus) was once widespread in Britain, and was a common sight in our cities and towns. Despite its size (a wingspan approaching 5 feet) the kite is surprisingly lightweight, and is typically a scavenger. Our streets were once perfect hunting grounds for such an opportunist, and where there was rubbish to pick through there were rodents to pick off too.

Then came centuries of persecution – stemming from an uneducated and frankly abhorrent attitude of Man towards any creature with a hooked beak or claw. The red kite suffered, and by the 1950’s there were just a handful left in central Wales. With protection, that tiny population began to recover, and elsewhere in Britain birds were introduced from abroad, a scheme particularly successful in the Chilterns.

Today, we now support more than 10% of the world population – some 3000 breeding pairs. The original Welsh birds have flourished and at feeding stations in Rhadayer many hundreds of birds fill the air.

Ignore the bad press. Kites do not impact on the populations of songbirds, and are no threat to your pets (unless you keep free range earthworms). They are simply stunning birds that should be cherished, and as anglers, we are truly lucky to to be able to look up from our rods so often and see them soaring above.