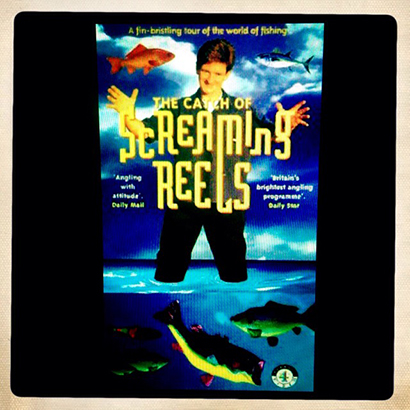 Ahhhh, who can forget 1993? The FA Cup Final went to a replay for the final time, Take That had their first number 1 single, Whitney Houston said she would always love us and Meatloaf said he do anything for love, but not ‘that’ – (nor would we want you to Mr Loaf).

Meanwhile a new Television and Film Production Company made their first ever programme. Years before Broadchurch and Spooks came into our lives, Kudos Productions were making Screaming Reels – a wonderfully irreverent fishing programme quite unlike anything we had seen before.

Presented by Nick Fisher Screaming Reels was truly diverse. The first episode, for example, opened with Nick Fisher catching pollock from a rocky mark in Ireland, and went on to feature newsreader Fiona Armstrong in chest waders casting for salmon and a guided tour of a maggot farm.

Though the slightly ‘off the wall’ feel of Screaming Reels wasn’t to everybody’s taste, the busy format ensured there was always something of interest to just about everyone – even non-anglers. And the late night repeats would have picked up the post-pub Student audience too.