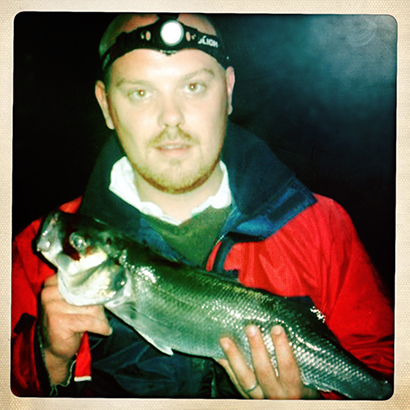 Nestled between the hills of South Wales and the eastern shore of Swansea Bay is the town of Port Talbot – home to a once bustling Steelworks and also to angling writer Simon Smith.

As soon as he discovered the great outdoors, Simon became something of a stranger to his parents, and when his grandfather introduced him to fishing he was pretty much lost to them altogether – certainly during the hours of daylight.

The Sea captured Simon’s angling heart. He would spend hours on the beaches near his home, desperately willing the rod top to jag. Somehow, he managed to find the time to forge a career, and today he teaches in a local Comprehensive.

He is also a keen writer and reader of poetry and a supper of real ale. In late 2013 Medlar Press published his work Running with the Tide, a poignant reflection of an angling affliction.

More recently, Simon can be found in the hallowed pages of Fallon’s angler Issue 4 – where he pays homage to the grey mullet and his own secret slice of paradise.