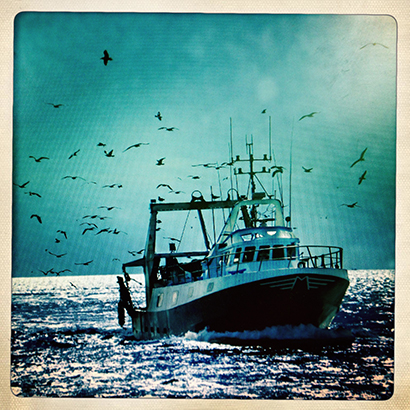 Fishpool has long been a fan of Channel 4. Aside from giving a massive shot in the arm to the British Film Industry and offering the viewer a diverse and sometimes controversial selection of programming, Channel 4 has also catered for us anglers. Go Fishing, Catching the Impossible and Screaming Reels have all featured in past issues of Bits and Pieces, while this autumn we were treated to The Catch.

Though focussed upon Commercial Fishing rather than the whimsical efforts of us rod-wielders, The Catch was compelling viewing. This is probably the most dangerous occupation in Britain, and yet it is also one of the most volatile in terms of remuneration. Once the deckhands have coped with the seasickness, working 8 hours in every 12 for seven days or more, and dealt with physical and mental exhaustion, they still remain at the mercy of the Sea. A poor catch might see them earn nothing, and though a bumper haul might bring in serious money, there is stiff competition and fluctuating fish prices to contend with.

Anyone who missed The Catch first time round will do well to catch up with it in some shape or form. The language is fairly choice, but given the brutality of the profession is should come as no surprise.