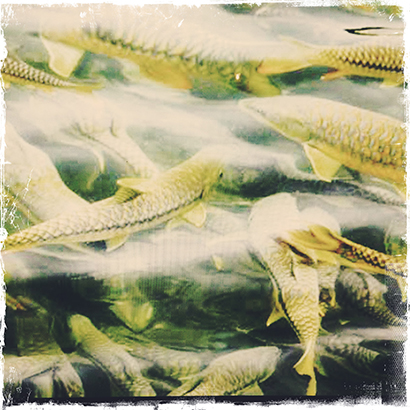 Certain species of fish seem to represent perfectly the landscape of their environment. The taimen in the vast plains of Central Asia; the blue marlin in the deep azure of the open ocean; and the golden mahseer (Tor putitora) in the mythical and spiritual waters within the foothills of the Himalaya.

The golden mahseer is one of 17 species of Tor, and is the largest and most revered. It can grow to a huge size, weighing as much as 200 lb and measuring 9 feet in length. They are a migratory fish found in shallow, well oxygenated upstream waters in summer but moving downstream as the cold of Winter takes a bite.

Anglers have long sought the golden mahseer – their size and fighting ability have drawn fishermen and women from across the globe. They are able to negotiate rapids flowing well in excess of 20 knots and have extraordinary power as a result.

Hooking a mahseer can be difficult enough, but landing one is an even tougher proposition.

The golden mahseer has inspired much in the way of literature with books such as Somewhere Down the Crazy River – the co-author of which, Paul Boote, starred in Casting for Gold alongside John Bailey.

Fishpool almost need not mention that the golden mahseer is a fish in severe decline – too many species are in this modern world….